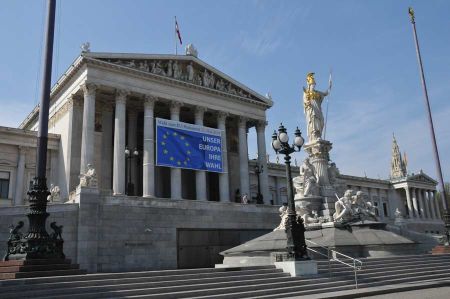 We had already mentioned that we wanted to use our stay during the local Roman days  in Brunn am Gebirge to make some explorations through Vienna to explore the cultural and historical evolution of the provincial capital of Austria.

So in addition to visiting the Hundertwasser apartment building there was time enough to visit important places of history of Vienna and report about our exploration, which should also show some references to the Ottoman period.

The origins of the Inner City dates back to a Celtic settlement and later to the camp called Vindobona built by a Roman legion. Archaeological evidences show that as early as the Paleolithic natives have committed at the area and at the beginning of the Neolithic Age, the Vienna basin was inhabited continuously already. From the Bronze Age, called "Urnenfelder" culture, several cremations testify this but also traces of settlements existed in Vienna. The older Iron Age Hallstatt culture is represented in Vienna too, among other things by still highly visible grave mounds and traces of settlements. From Celtic times, an oppidum at Leopoldsberg and a Celtic settlement called Vedunia ("forest stream") is known.

In the 1st century AD the Romans built a military camp (castrum) as border security to the province of Pannonia and connected the civil city Vindobona (in today's 3rd district) on the site of today's Vienna city center close to the Danube. Still today you can see the course of the wall and the streets of the camp from the streets in the 1st district (Inner City). The Romans remained until the 5th century. The Roman legionary camp lay far to the east of the Western Roman Empire and therefore quickly became victim in the turmoil of the Germanic barbarian invasions.

The destruction of the old buildings in the 2nd World War and during the course of reconstruction some of the  Roman officers' houses were discovered in 1948 at Hoher Markt 3, and can be visited at the Roman Museum since 1950.

The High Market (within the meaning of: important)  is another important ruin of the so-called Tribune House (staff officer quarters) of the former Roman military camp Vindobona. In the Middle Ages the High Market was a center of the bourgeois Vienna and was surrounded by numerous guild houses. Mainly food and textiles were traded. From 1325-1839 when the building was being used as the Vienna Criminal Court, then until 1850 as the magistrate civil court; then in the northwest corner of the square (today Nr. 5) it was the Schranne, the courthouse, with the in-house chapel "Of the Agony of Christ". From the terrace of Schranne the court judgments were read to the public; the execution site was mostly elsewhere, usually outside the city walls. In front of Schranne a pillory was erected.

After completion of the Third Crusade, the English King Richard the Lionheart was caught and imprisoned in Dürnstein at Erdberg near Vienna (now in the 3rd district) during his return to England by Margrave Leopold V in 1192. With the lush ransom a mint was established and the first major expansion of the city was funded. As the second city after Enns in 1212 in the duchy of Austria, Vienna got city- and staple rights in 1221. The latter meant that merchants who passed through Vienna, had to offer their goods for sale in the city. This allowed the Viennese people to buy and resell, so that Vienna soon got more important in their trade relations, in particular along the Danube and to Venice and was considered one of the most important cities of the kingdom.

In 1529 Vienna for the first time was unsuccessfully besieged by the Turks. The border between the Habsburg and the Ottoman part of Hungary proceeded almost two hundred years, only about 150 kilometers east of the city, what its development rather restricted. After all, Vienna now received modern fortifications.

These fortified buildings that made up the bulk of the construction work until the 17th century, it should prove itself in 1683 when the second Turkish siege happened. It protected the city for two months, until the Turkish army due to the arrival of the Polish King John Sobieski relief army the Turkish had to quit Vienna. This was the beginning of the final return urging of the Ottoman Empire from Central Europe.

Egyptian Blue painted on a sloane slap at Brunn am Gebirge