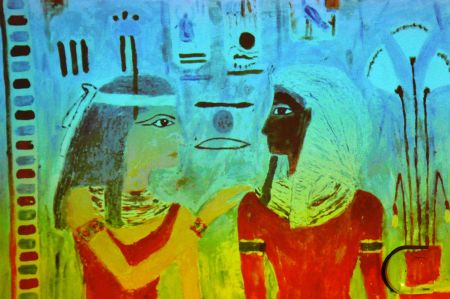 Yet another exciting artifact was found in the aforementioned excavations of a burial ground in Brunn am Gebirge in 1972: A polychrome-painted stone slab with the representation of a woman in a Noric-Pannonian costume, a kind of dress in modern language, in a dark shade of red.

This artifact is unique in Austria and probably far beyond. For a long time the gem held a neglected slumber in the house before the case was again taken up by Dr. Robert Krickl and was examined in details. Using new analytical methods in investigation, what colors were used in Roman times. The result: They were using natural pigments, on the other hand he also found the only artificially color produced at the time - the so-called "Egyptian blue".

Egyptian blue is one of the oldest, artificially produced color pigment. Usage in ancient Egypt since the 4th Dynasty (2639-2504 BC) was occupied by Lucas & Harris. The discovery of the pigment was probably closely related to the earlier production of colored glazed ceramics (Egyptian Faience), since the same raw materials were used.

Egyptian blue was used by almost all of the following dynasties. Exceptions can be found in the politically turbulent times where mixtures of carbon black and white were detected as blue pigment. In ancient times, Egyptian Blue spread to Mesopotamia, Greece and the Roman Empire and its provinces.

The pigment consists of the elements silicon and calcium, the coloring copper and melting point-lowering sodium or potassium as a flux. These finely ground quartz sands and limestones were mixed with copper or bronze chips and some soda or salt vegetable ashes and burned at least at 870 ° C for several hours. It is important that the ratio of copper to calcium is about 1: 1, because only then the crystalline layered silicate Cuprorivait (CaCuSi_4O_ {10}) creates the color-imparting component of the Egyptian blue pigment. In nature Cuprorivait occurs very rarely. So far, it has been demonstrated in small quantities only in the Vesuv lava from Italy.

In order to bring the results of the public study in more detailled, Dr. Robert Krickl launched three actions in terms of color pigments Egyptian blue around the Roman Days: First "cooked" pigment by antique originals in large quantities after that is of the artists' group NOW ( a group of freelance artists, individuals who deal with current issues and share multimedia projects for development) were then processed into modern paintings and admire in their own exhibition.

With the theme "Women in Egyptian blue" featured members of the group now present representations of women's own interpretations, which were presented in an exhibition. To produce the images as well as the sculptures that already described Egyptian blue was used.

Second, an own stamp appeared on this fund (which shows the crystal structure and shape of the connection), which was first issued with special envelopes in the Roman days festival. Ultimately, the overall impression of the then local costume should be made available to the public again for the first time. For this purpose, a reconstruction after thorough analysis of the painting on the plate and by incorporating further archaeological finds made. In the Roman days the local "ancient-costume" was presented to the local population first.

Tour through Vienna and short introduction to history of Fiaker