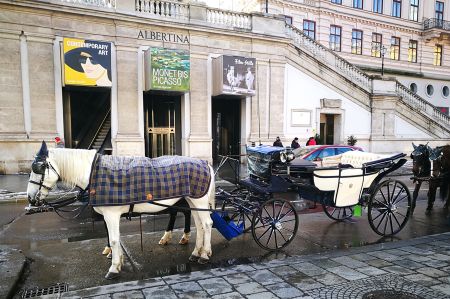 After the hike through the Palace Park of Schönbrunn we had gone to the subway station in Hietzing and had taken a day ticket for subway and buses, since we wanted to go into the city center for some more tourist destinations.

The day ticket is a really good way to discover the city of Vienna, as all important destinations are easy to reach. Zeynep had also researched a city guided tour for us from the Internet with the slogan "discovering Vienna on foot" as main motto with often changing theme walks with really professional city guides. The Viennese city walks regularly offer guided tours on a variety of topics - from the "Music Capital of the World" to "Jugendstil und Jahrhundertwende" and the "Lust des alten Wien". Follow the link to discover your main interest. So we met with other international visitors to participate in one of these Vienna walks in the Webgasse at 3.00 pm.

Along the way, we were struck by the many historically important buildings of the 18th and 19th century, which were expertly described by our guide and explained in their function. However in the run-up to the visit to Vienna we had already read about the different views about for the tourists so popular Fiaker tours, so we were more than surprised about the number of the carriages. Especially as the coach services in the winter were described as largely set.

As a Fiaker in Vienna a two-carriage is known, which can be rented by guests to do the city tour, as well as their coachman themselves. In the year 1693 the first license for a Fiaker was given. Around 1700 there were about 700 Fiaker coaches in Vienna. In the best time from 1860 to 1900 there have been more then 1000 coaches.

Fiaker are now a popular but as well contradictory tourist attraction and mostly offer tours from several standings in the area of the old town of Vienna. A tour is also offered at the Zentralfriedhof in Vienna. In 2008 there were 144 Fiaker, of which the half on straight, the other on odd days offer tours. Many of these horse-drawn carriages are now more then 100 years old and are extensively restored during the winter months. Starting points are located at Stephansplatz, Heldenplatz, Michaelerplatz and Petersplatz as well as at the Burgtheater and the Albertina behind the Viennese Staatsoper. Prices for round trips of varying lengths are fixed by the City of Vienna.

The contamination of the Viennese town center by horse apples of the roving Fiaker and the resulting odor nuising led to the fact that the Viennese Fiaker horses were prescribed to carry Pooh-Bags by the regional law from 1st of July 2004. This regulation is controversial among the fugitives; on the other hand, a high fine is foreseen in case of disregard. In addition, the city administration concluded in 2007 that the iron horseshoes destroy the street pavement more than cars and trucks, resulting in costs of renovation of around six million euros, and therefore gave the animals a trial of plastic horseshoes.

Animal welfare organizations criticize the conditions under which horse-drawn carriages are used and their accommodation during labor-free periods. Horses would be too much stressed as escape animals in road traffic and would not have any suitable possibilities for movement. In addition, horses should be provided with permanent food and water in order to avoid colic that may lead to the death of the horses. This is not guaranteed during fiaker operation and endangers profitability.

Every year there are media reports with horses collapsed in the heat. For years, there have been discussions about shadow spending places for horses, which have not yet been implemented. The city of Vienna has issued a package of measures for the protection of horse-drawn sleighs with which not only the condition of the horses is to be controlled, but also a possible alcoholisation of the coachmen. With a law novelty from the autumn of 2011, Fiaker has to be provided with number plates and booklets. Trips, feeding and rest periods must be entered in the travel books. The number plate has the purpose of more rapid identification. Furthermore, the concession test is tightened.

The Fiaker (in this case the coachmen) were often city-known originals. Allegedly, a lot of Fiaker from the Fiakerdörfl used to live near the Fiakerplatz in the 3rd district. Here is also the Fiaker monument, created by Josef Engelhart in 1937, which presumably represents the Fiaker Josef Schmutz (colloquially: Schuaster Fraunz).

We were able to get many more details of our really motivated city guide during the tour of the city, which also liked to incorporate examples from the daily life into the historical explanations, a recommendation for every visitor to Vienna. We ended the evening on the 18th floor of the Le Loft restaurant cafe in the Sofitel, whose views through the panoramic windows can only be called breathtaking; The cocktails are worth every penny, but also the Viennese coffee specialties are not to be despised.

The Palace Park and the Gloriette of Schönbrunn