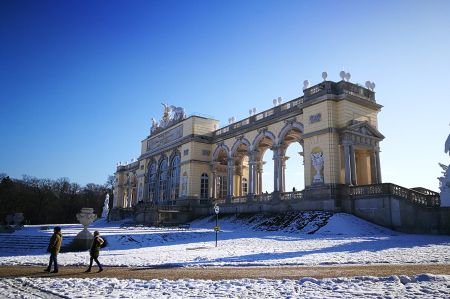 The palace and its park form an inseparable ensemble. The center of the park is the Great Parterre, which stretches on the main axis to the Gloriette Hill since about 1780.

The 32 sculptures placed on the edge of the "great parterre", as well as the remaining figures in the park, were created in the studio of Johann Christian Wilhelm Beyer and according to his concept, they represent figures from Greek-Roman mythology or their history.

Although the design has already been sketched in Fischer von Erlach's design, the garden architectonic design goes back to Jean Trehet, a pupil of Le Nôtres, who began the planning in 1695 and was constantly occupied by Schönbrunn until 1699. The width of the parterre goes back to Trehet and he has planned the banquette on the side of it, too. There are notes to Trehets plant, but unfortunately no pictures.

After Maria Theresia had chosen the castle as summer residence in 1742, the parterre was extended to the current size around 1750. In particular the Emperor Franz I. Stephan, took care of the reconstruction of the plant and of the Tiergarten in 1752 and 1753, to the Dutch botanical garden, on the basis of the purchased land, which was connected westwards to the existing site. He commissioned the Dutchman Adrian van Steckhoven and his assistant Richard van der Schot. Correct as well is, that in 1755 the present Orangerie building was completed, but plans for the formation of the hill flourished during the emperor's lifetime only to such an extent that a parish leading the parquet was struck into the forest.

It was only seven years after the death of her husband that Maria Theresia commissioned a thorough reconstruction of the hill and the park, namely to Hetzendorf von Hohenberg, whom her adviser Kaunitz had already introduced at Court in 1765. Hohenberg's first project (1771-72) saw a large basin on the hill, which was to feed a number of fountains, for example, next to the Neptune's fountain, four more were planned on the Great Parterre. The construction work was begun in 1773. A star-shaped basin, existing in the middle axis of the Parterre since around 1700, was moved into the western banquette, where it still exists today as a Star Basin or Western Naiad fountain.

It was not until 1776/77 that the water requirements of the wells of Hohenberg's first design could be covered. For this reason, twelve already well-dug wells were added, the four on the Grand Parterre and the others on the slope. Instead, Hohenberg completed the Obelisk Fountain (1777) and the Roman Ruin (1778), concentrating on the design of the Neptune Fountain at the foot of the slope, which with its larger-than-life figures completes the parterre and simultaneously forms the transition to the hill. After four years of construction, this was put into operation in 1780, during Maria Theresa's lifetime.

The park was opened to the public in 1779 by Emperor Joseph II, and was an important recreation area for the Viennese population. The important court garden director was Friedrich Leo von Rottenberger, who was successful in the management from 1918 to 1934. After the end of the monarchy the gardens were managed by the Bundesgärten Wien - Innsbruck. Franz Matschkai was succeeded by Rottenberger. At present the management is under Brigitte Mang.

The Gloriette was built in 1775 on the hill above the Neptune Fountain. It recalls the Battle of Kolin on June 18, 1757, when the conquering of the Prussian King Frederick II was stopped in Vienna during the Seven Years' War.

A little further away lies the "Schöne Brunnen", which gave the castle and the plant the name. A well house built by park gardener Adrian van Steckhoven was replaced in 1771 by a new building by court architect Isidore Canevale. It has the shape of a pavilion with a square floor plan and is opened on the front and back by an arch. In front of the back wall, in the center, resting on a basin, is an allegorical statue of the spring nymph Egeria. It was created by Wilhelm Beyer and was erected in 1780. Her right arm is the vase from which the spring water flowed. The interior walls of the house are covered with a dripstone and planting corpus, and the exterior is decorated with dripstone. On the right side wall is the fountain with the monogram of Kaiser Matthias. Since its restoration in 2012-2014, the building appears in white again. From the well to the construction of the high-water supply, drinking water was collected for the farm, which was brought to the Hofburg every day.

History Travel in the Capital of Art