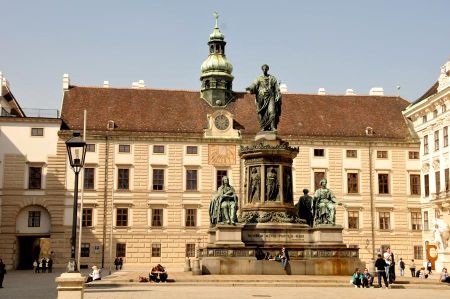 Austria’s capital, Vienna is famous for its cultural events, magnificent imperial palaces, coffeehouses, classical music and its charm that dazzles the visitors. Located in today’s city center of Vienna, the Romans constructed a military camp called Vindobona in B.C. 1st century and this gave a start to the history of Vienna.

The name of Vindobona comes from a language that was used by the Celts, who were a part of Europe tribes lived in prehistoric and first age periods. This makes us think about the possibility of Celt settlement in the region before the Roman period. The traces of the Romans, who inhabited the region until the 5th century, can be viewed in the city center even today. The remains of a Roman house can be seen on the Michaelerplatz excavation site in the heart of the city.

The Baroque structures that give the characteristics of the city were constructed under the rule of Empress Maria Theresa and Emperor Franz Joseph. Among the most cultural places of the city, which has internationally famous galleries and museums, there are the Museum of Fine Arts with world’s most broad painting collection of Pieter Bruegel, Museum of Leopold that hosts the works of Gustav Klimt in MuseumsQuartier region, Museum of Modern Arts (Mumok), Architectural Center and Kunsthalle that is one of the biggest galleries of modern art.

Vienna owes a part of its international fame to the famous composers like Strauss, Mozart, Beethoven and Haydn that lived there. Vienna Philharmonic Orchestra is one of the best orchestras in the world. State Opera has an important place among the opera houses and Vienna Child Cord also should be mentioned.
We headed towards the city center to join the unique and special ambience of Vienna, where the Danube River passes in the heart. Due to the mass transportation cards that we are going to use during our travel, we can get on the tram and metro as much as we wish within the card’s validity.

We immediately started to walk on the side streets of Vienna and encountered the Anker Clock with its historical figures. Designed by the painter and sculpture Franz von Matsch in 1911, the clock is the witness of an art movement called Art Nouveau that elegant decorative ornamentations come to the forefront. Anker Clock also connects two buildings in Hoher Markt, which is one of the oldest squares of Vienna.
While we lost in the aristocratic air of Vienna’s streets, Hofburg Complex that reminds us the dazzling glory of the huge Habsburg Empire, appeared. From 1276, until the collapse of the empire in 1918, the complex hosted to the Habsburg Dynasty’s emperors that ruled Austria and some regions of Europe for six centuries. Habsburg Complex also portrays the periods of Gothic, Renaissance, Baroque and Neoclassical architecture.
Museum of Hofburg Palace is one of the places that should be seen by the ones who want to travel into history, art and luxury in the heart of Vienna. The museum is divided into three sections: Old Imperial Apartments, Silver Collection and Sisi Museum.
The Spanish Riding School, which is located next to the Michaelertor, is the only educational establishment and institute of the world in the art of classical riding since the Renaissance. The famous shows of noble and trained Lipizzaner Stallions can be experienced in the baroque environment of Dynasty Palace.

While walking in the Habsburg Complex, we arrived at an elegant square that the statue of Prince Eugene of Savoy is located and saw the Neue Burg, the youngest structure of the complex. Located in Neue Burg, with its baroque design there is the most beautiful library room of the world in the National Library. The model of Ephesus Ancient City in the Ephesus Museum, helps us to apprehend the architectural structure of the ancient period. Exhibition of the Remains of Ephesus and its ruins of 2000 years that located in the Seljuk district of Izmir, takes us to a time travel full of contrasts in the hall that designed in Neo-Baroque style.
The Imperial Treasury, the Hofburg Convention Center, the Collection of Ancient Musical Instruments, Lipizzaner Stables, the Butterfly House, Austrian Film Museum, the Augustinian Church, Papyrus Museum, the Museumsquartier and more can be visited in Hofburg Complex.

The Museumsquartier is one of the world’s 10 biggest art and culture complexes with its approximately 70 cultural institutions contains within itself. Vienna Museumsquartier is the place of variety that presents art and joy of living. It has a wide range of visual and performing arts; painting, music, fashion, theater, dancing, literature, culture, street art, design, photography, culture of children’s play are in this complex among the modern buildings in the middle of the city. Besides of being used as an art and creative area, this 640 thousand m² complex is a meeting place and a different living space with its 40 different apartments, terrace cafes, bars, shops and rest areas.
The Ring Street (Ringstrasse) draws a circle in the city center of Vienna and joins to the Museumsquartier region. At the square the monument of Maria Theresa welcomes you. The construction of the statue was completed in 13 years. Maria Theresa’s statue, which has 19 meters height and 44 ton weight, salutes people with her right hand. Maria Theresa ruled the empire from 1740 to 1780.
While walking along the Ring Street, on our left side, we noticed the Austrian Parliament Building with its Greek-Roman style. After a while, designed in Gothic style by Friedrich von Schmidt between the 1872 and 1883, Rathaus (Ministry) was at our left and Burgtheater building, which is the Austrian National Theater, was on the right side of us.

Besides of losing yourself in the atmosphere of a different city, walking and taking photographs all day was tiring. Café Landtmann, which is at the cross side of Burgtheater building, is a wonderful place to drink something and have a rest. In 1873, while establishing the most stylish and elegant local, Franz Landtmann makes the “Viennese Café” institution a part of traditional culture. Because of its location, Café Landtmann is visited by a great deal of visitors, especially from the art world. Author and poet Peter Altenberg, neurologist Sigmung Freud, composer Gustav Mahler, actor and director Max Reinhardt, actress and singer Marlene Dietrich, actor Romy Schneider, Oscar awarded actor Burt Lancaster, actor Hans Moser, Queen Juliana of the Netherlands, Hillary Clinton and Paul McCartney are some of the legendary visitors of the coffeehouse.

After we rested enough, we headed towards the Stephansplatz square in the geographic center of Vienna. The St. Stephan Cathedral that presents the most beautiful works of art and architecture was in front of us. With the colors of the light from the stained glass windows of the cathedral and the church music in our minds, we visited the most distinguished Gothic structure of Austria. Then, we rode the elevator up to the south tower that a marvelous panorama of the city and colored roof view wait for the visitors there.
Our daily tour continued along the famous shopping street of Vienna, Kärntner Straße. Since it is closed to traffic, the street is a perfect place for the ones who wants to go shopping or just walk. Kärntner Street is fitted out with historical structures, traditional stores, elegant shops of famous brands, restaurants and cafes. Also, the street musicians, who perform on the street, almost present you a feast. The famous composer Wolfgang Amadeus Mozart, who fitted 600 works in his 35 years of life, died in a house on this street. Because of this reason, the shops on the Kärntner Street put up for sale Mozart related souvenirs and chocolate types.
Kärntner Street takes you to the corner of Hotel Sacher. The best address for “Sacher Torte”, a traditional Viennese specialty, is the cafeteria at the entrance of Hotel Sacher. This chocolate and apricot flavored cake was invented by Franz Sacher and the original recipe is secret only in Hotel Sacher that the cake is only presented in Café Sacher. Since the recipe of this outstanding Viennese specialty is impossible, it should be experienced personally. We skipped the lunch, but Wiener Schnitzel (Viennese schnitzel) is among the indispensable of Viennese culinary.
If you think about an abroad vacation, Vienna, which makes the past and today live in harmony, is a city that has to be at the top of your list. You can discover the city yourself without the necessity of Europe vacation packages of tour agencies. When you start to walk in the streets of Vienna, the city guides you.