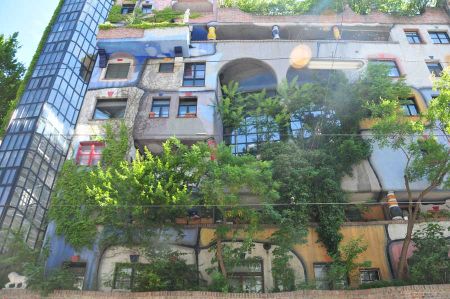 Of course, we took the advantage to pass some city areas in Vienna within our presence in Brunn am Gebirge, this time our interest was mostly directed to one of the buildings of the Austrian artist Friedensreich Hundertwasser, which were planned and implemented together with his architect friend Josef Krawina.

In the 50th Hundertwasser, who was called Friedrich Stowasser with real name, was known for a natural and humane architecture already.

Hundertwasser began his involvement with manifestos, essays and demonstrations, in which he expressed his rejection of the geometrically straight lines of the grid system and the merely functional architecture. In 1972 he exhibited architecture models with which he illustrated his ideas of roof forestation, the tree tenants and the window on the right and developed architectural forms as the High Meadow House, the eye-slit house or terrace house in the Euro Visions program "wish". In lectures at universities and architects' associations, Hundertwasser spoke about his ideas and concepts of a natural and more humane architecture. By him the uneven ground, forests on the roof and spontaneous vegetation was integrated into buildings. His buildings live from use of diversity instead of monotony, for romance, for the organic and unregulated irregularities and for harmony in living with nature. 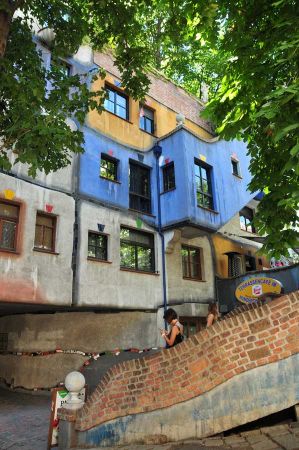 In a letter, dated with 30th of November 1977, to the Vienna mayor Leopold Gratz the at the time Federal Chancellor Bruno Kreisky advised to give Hundertwasser the opportunity to implement his concepts in the field of architecture in the construction of a residential building. Hundertwasser was invited by letter from 15th of December 1977 by mayor Gratz to design a residential building in Vienna based on his ideas. Since Hundertwasser was not an architect, he asked the City of Vienna, to help him with an architect who would be willing to implement his concept in adequate plan drawings.

The city council organized architect Josef Krawina to work with Hundertwasser. The first results were presented by Hundertwasser in August and September 1979, they based on the rules for social housing preliminary and were shown as a Styrofoam model, however, the architectural concept of closed construction corresponded and Hundertwasser was shocked and rejected because they corresponded exactly to the straight and leveling grid architecture, against what he had always fought. Hundertwasser wanted a "house for people and trees", as he had already described in his text "Foresting the city" years earlier: In his model of the "terrace house" for the program "wish", he had already visualized this type of house. 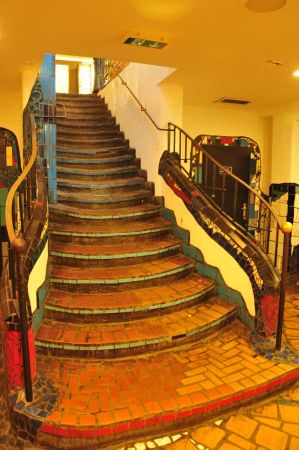 They succeeded when Hundertwasser, still in 1979, was able to win the City of Vienna for his concept of a leafy terrace construction and thus for exemption from the normally applicable building codes. In March 1980, followed by a second preliminary Krawinas including associated perspective or axonometric drawings and an accompanying modell made from wood. Krawina developed, while under intensive utilization of the granted legal possibilities, a significantly deviating from the building regulations, a consensual structure. This building was left unchanged for all planning steps which are substantially and actually put into practice.

According to the concept and the ideas of Friedensreich Hundertwasser, Josef Krawina designed as co-authors and Peter Pelikan planned, colorful and unusual house with many unusual details filled with plants in the transition areas and uneven floors. In 1985, about 250 trees and shrubs were planted and are now grown, thanks to the maintenance by tenants and owners representatives to stately trees, - a real park on the roofs of the house.

Thus, the house already differs significantly from the outside of the remaining buildings in the district. Coming closer to the building, first minutiae points are visible, clearly differ from a rectangular building: there are hardly any corners. Even the transitions between floors and vertical walls are round. Columns are clad in different size, round tiles that executed brilliantly, reflects in the sunlight. 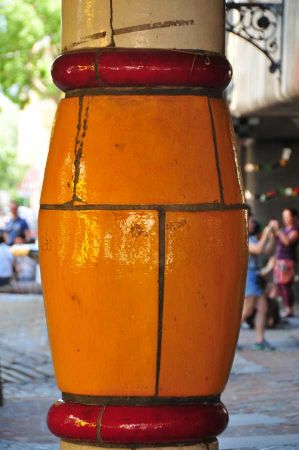 The house does not follow the usual standards of architecture. Hundertwasser's models are clearly visible: among other things, Antoni Gaudí, the Palais idéal of Ferdinand Cheval, the Watts Towers, the anonymous architecture of allotments and those of the storybooks. The house has 52 apartments and four shops, 16 private and three communal roof terraces. The media coverage on the building was enormous all over the world. In Vienna, the Hundertwasser Krawina house is among the most photographed tourist attractions:

"A painter dreams of houses and a beautiful architecture in which the human being is free and this dream come true."

Walk along the Danube and its old river beds