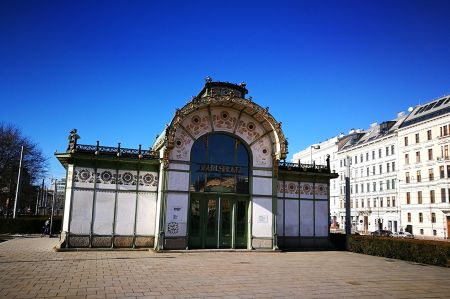 The Viennese Karls Church, a Roman Catholic church in the 4th district of Vienna, was built in the first half of the 18th century. Today, the church is a protected monument.

It is located on the south side of the Karlsplatz, close to the center, and is one of the most important baroque church buildings north of the Alps and one of Vienna's landmarks. We reached the church building within the scope of our tour through the inner city of Vienna, whereby again sections were covered by subway.

The Karlskirche was built by Emperor Charles VI., commissioned by Johann Bernhard Fischer of Erlach as the central link between Rome and Byzantium. Thus it is leaning on the appearance of the Hagia Sophia and imitates the Trajan column.

Since Karlsplatz was again established as an ensemble in the end of the 1980s, the Karlskirche is as an architectural counterbalance not only due to its dome and the two flanking towers, but as well due to the buildings of Music Academy und Technical University.

The church was the emperor's parish church from 1783 to 1918 and has been supervised by the crucifixes since 1738 with the red star from Prague. Only after the Second World War there was a temporary interruption, where from 1989 to 2000 the administration was taken over by the personal prelature Opus Dei. Since a long parish church, it is also the seat of the Catholic university community of the nearby TU Vienna.

An architect competition was announced, during which Johann Bernhard Fischer von Erlach succeeded, amongst others, against Ferdinando Galli-Bibiena and Johann Lukas von Hildebrandt. The building site was fixed on November 11, 1715; In the same year the first stone masonry orders were given to master Johann Georg Haresleben and Elias Hügel in Kaisersteinbruch and Andreas Steinböck in Eggenburg. On 4th of February 1716 the foundation stone was laid on a hill on the right bank of the hardly regulated river Wien. Due to the death of Haresleben in the same year, Hügel led the stone masonry work alone and became an employee of Fischer von Erlach.

On both sides of the choir of the Karlskirche and as elevations to the oratories unusually generously dimensioned spiral staircases are arranged. They are one of the winding staircases with columns, a special type of stairs, which originated in Rome. The first of these stairs comes from Donato Bramante and was created for the Belvedere of the Vatican (1507-1514). Numerous architects echoed with basically similar spiral stairways. With the influence of Italian-trained architects in Vienna, it was logical to build on Roman staircase architecture. The winding stairs of the Karlskirche are impressive proofs of this.

Hard Kaiser stone was used in the main portal, for all the stairs (emperororatorium), base plates, cornices and the monumental posts of the two columns. At the Hochaltar, Elias Hügel designed the cafeteria, Philipp Köchl the tabernacle of Laaser marble and the Johann Hen Röhrig liner altar steps made of black Nassauer marble.

After Fischer's death in 1723 the building was completed by his son Joseph Emanuel until 1739, which partly changed the plans. The church was originally directed at the Hofburg and until 1918 also an imperial patronage church.

As an author of historical architecture, Fischer combined the most diverse elements. The façade in the center, which leads to the porch, corresponds to a Roman temple portico. The two pillars next to it have the Trajans column in Rome as an example. Beside this, the two tower pavilions, influenced by the Roman baroque (Bernini and Borromini), extend. Above the church hall is a dome with a diameter of 25 m and a high tambour, which has been shortened and partly altered by the younger fisherman. The plan of the dome is not circular but has the shape of an ellipse.

We follow the Karlsplatz and reach the MuseumQuartier (MQ), an area in the 7th district of Vienna with various new buildings as a museum building, near the center of the city. The offer ranges from educational and performing arts, architecture, music, fashion, theater, dance, literature and children's culture to the new media. At the time of its completion, it was the world's eighth largest cultural area.

At the Ringstrasse, the Hofburg and its museums are close by. Neighbor of the MQ is the folk theater (Volkstheater), where we had the pleasure of attending the piano concerto Fazil Say's Gezi Concerto. The historic building of the former 18th and 19th century stables is integrated into the MQ, the outer facade of the MQ is the longest baroque façade in the Austrian capital.

The buildings, erected as imperial court stables in 1725, were converted into a measuring palace in 1922 and accordingly adapted. In April 1998, the conversion to the MQ began, which was opened three years later in two stages (June and September 2001). The original, baroque buildings of the complex are now facing the modern architecture of the new museum buildings.