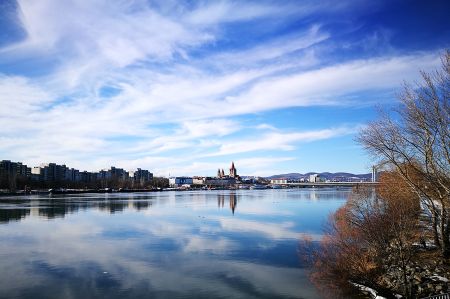 During our tour through Vienna, we have chosen the subway to the station on the Danube Island to take advantage of the rare sunshine of the mostly dull days in February.

Since the Danube always carried a lot of sand and debris, the flow velocity was greatly reduced because of the lower gradient in the Vienna basin, considerable deposits were growing in the Vienna area. This not only led to less options for shipping, but also to a characteristic urge of the Danube to move her bed further into the Marchfeld; A constant shift of the original main course to Lower Austria was only prevented by Danube regulations later on. The Danube always crossed the shores, which led to catastrophes in the lowlands of Roßau, Leopoldstadt, and Weißgerber, but above all in the villages on the left side of the Danube; from the earlier period, the flood of 1501 and the "All Saints' flood" of 1787 are to be emphasized.

The Danube had five main river beds in historical times.

Saltgriesarm or Nußdorfer Arm: This southernmost arm took its course between Nussdorf and Heiligenstadt, past the summit of Döbling to the Nußdorfer line, from there along the foot of the Schottenpoint to the city and here, next to Salzgries joined today's Morzinplatz, today this old arm is called Danube Canal.

At the time of the Romans, the Saltgriesarm was navigable; Remains of a staircase, which led down from Maria am Gestade to the harbor, were discovered in 1901 and 1938. Between this Danube arm and the Danube Canal lays a large island, the Upper Werd. Gradually, with this southern arm, the Danube more and more turned away from the city; In the thirteenth century it began to store sands so heavily that it could no longer be used for shipping. Its mouth into the Danube Canal was increasingly upstream, in 1628 it was near the present Augartenbrücke, 1706 above the today's Friedensbrücke. 1836/1837 the remaining riverbed was closed completely.

Viennese arm or Viennese water: this arm essentially corresponded to the present Danube Canal; It gained in importance after the dispatch of the Saltgriesarm in the 13th century. Efforts to keep it navigable are already known since 1376 and 1455 (Kaspar Hartneid). An arm branching off in today's third district in the course of the Hetzgasse was already sown in the 14th century.

Since the Viennese water thus became a channel character, the name "Wiener Kanal" was also used, changing to "Danube Canal" from the 18th century on. In 1836, this was straightened by a new route between the present Ostbahn bridge and the winter harbor, and thus the section that extended to the Lusthaus in the Prater was shut down. In the course of the Danube regulation (1870-1875) the construction of the Nußdorf lock gate system took place.

Flagpipe water: Its course was roughly equivalent to that of the later Northwest and the Am Tabor road; Over the present railway ground at the Pratertern it ran to the eastern Danube arm. The name derives from flagpoles, which are mentioned in the Burgfriedensprivileg of 1698 near the foundations at the newly built Tabor Bridge, signaling purposes and marked the castle peace margin there. In 1548, this arm was the most watery, but it began gradually to smear, was not navigable around 1780, and consisted only around 1840 of ponds, which were closed during the construction period of the railway buildings.

Kaiserwasser: From the middle of the 17th century, the Kaiserwasser was the main channel of the Danube; The diversion from the flagpole water lay at the present-day Nordbrücke, the reunion with this took place in the area of the Reichsbrücke. The imperial water was demolished in 1870-1875 and then poured into it.

Floridsdorfer arm: the most watery Danube bed, the course of which can still be seen on the Old Danube. The side arms were called the Heustadel water.

In the course of the construction of a relief course in the former flooding area, which was accompanied by the Danube on its left bank, which was regulated in 1870-1875, a 20-kilometer-long and with an average 400-meter-wide island was built between the two rivers. The "Danube Island" was getting quite important for short term and weekend travellers every year during the summer and later on the Danube Island was directly connected to the U1, which we also visited during our exploration.

The main arm of today's Danube was completely ice-free, the side arms, despite the now thawing weather, still almost completely frozen, which ice runners and walkers still energetically exploited. We disregarded this possibility, the ice surfaces seemed to us too be too thin and brittle.

Tour through Vienna and short introduction into the history of Fiaker