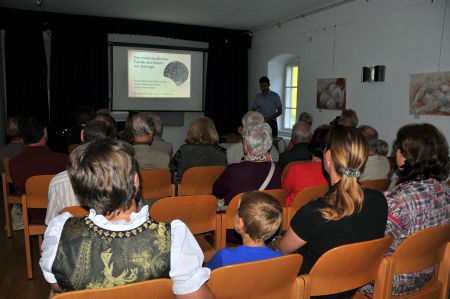 In our first blog reports we had already written about the coin findings from the Roman period in Brunn am Gebirge, which are today located in the exhibition at the Heritage House.

Once again these coins were brought to the center of the research by Dr. Robert Krickl, who deals with the development of historical background information of his native region in so many different ways. As one of its main research includes the subject of mineralogy and the crystals, it was obvious to deal with the composition of the alloys of the metals of coins finds that had been found in Brunn am Gebirge.

In the year 1972 we had come across a number of tombs from the Roman period during the course of construction in Brunn am Gebirge. Among the numerous grave goods there was a large collection of coins, which have been issued to Brunner Heimathaus in a number of 36 pieces. A research by the experts that time revealed: there were mostly bronze coins from the time of Constantine, just one single silver coin was among them - a denarius of Lucius Verus (co-regent of Marcus Aurelius, 161-169 AD..). As a highlight of the exhibition at the Heritage House just this coin was often placed at the center of visitor interest.

Dr. Robert Krickl then started the research about these findings from the point of metal composition of the coins in order to obtain new views inside into the ancient Brunn with the help of new scientific research methods. It should even create great amazement when the tests and their results then were used at the basis of a research report, which was presented during the Roman days in Brunn am Gebirge to the public for the first time. Activities like these, namely the communication of scientific findings with and to the public is the basic concept of the work of Robert Krickl.

For the then following chemical analysis of the coin material with latest high technical equipment available, which was kindly provided by the University, the existing image of the home and antiques researchers of the region were turned upside down: The "single issue" that always was proudly presented contained no trace of silver - it was an antique, but real "fake". On the other hand, the other "bronze coins" seem to have been covered in antiquity with a thin silver layer. Everything was reversed as intended - but that allowed interesting conclusions about the former life in the empire and its precious metal management.

Brunn am Gebirge or the former military camp Vindobonum was situated on the border between the Roman region of Pannonia to the Barbarians of the North and East, attacks of these people were almost a daily occurrence. So the idea was why leaving valuable precious metal fall into the hands of these barbarians. So it was of vital economic interest to produce a deceptively real-looking coin that should not contain any silver.

Errare humanum est - an old Roman slogan is saying, nobody is perfect.

"Errare humanum est" is a Latin phrase that is not reproduced in full in this form. Fully the statement should be read as follows: "Errare (Errasse) humanum est, sed in errare (errore) perseverare diabolicum." (Jerome, Seneca, Epistulae morales VI, 57.12; Cicero, Orationes Philippicae 12.2), which is translated as follows: "to err is human, but to insist on errors is diabolical."

Egyptian blue painted on stone slab in Brunn am Gebirge