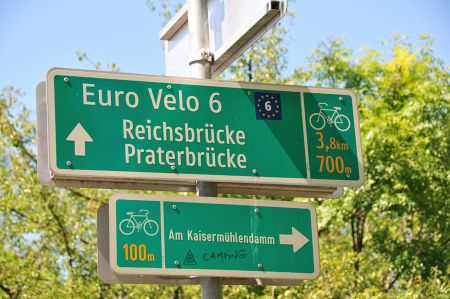 Within continuing of our project work on the development of camping tourism on the Balkans as well as the creation of intermediate stations (camper-route.de) on the way to the south, our tour planning first integrated the locations of Vienna and Budapest before moving on to Belgrade.

After exploring the campgrounds of Vienna West and Vienna South, our current goal was the campsite Neue Donau, which is relatively easy to reach via the motorway A 22, if you leave the A1 / E60 motorway leading directly to the city center at St. Pölten (S 33, in S 5 over the A 22 ) already. First simply following the Danube, just the last highway crossing is a bit confusing, just keep straight ahead towards Raffineriestraße. The campsite Neue Donau is on the left hand side of the road.

The Danube Island is an artificial island between the original Danube and the New Danube waterway between Vienna and Klosterneuburg, built between 1972 and 1988, a 21.1 km long and up to 250 m wide artificial island. It is part of the flood protection system in Vienna and, together with the Old and New Danube, serves as the recreation area in the Viennese Danube area. The initially highly controversial construction of the relief channel as an integral part of the Viennese Danube regulation was already decided in September 1969. By infiltration of the Danube Island in the years 1972 to 1988, a watercourse parallel to the Danube was created, which is normally a standing body of water, but can be flooded during floods in order to prevent flooding in adjacent areas of Vienna. The island itself is also spared most of these floods even during extreme floods. Due to the Danube regulation, a throughput capacity of up to 14,000 m³ / s is possible, which corresponds approximately to the largest flood of 1501 ever measured in Central Europe.

Around 1.8 million trees and shrubs or about 170 hectares of forest were planted around the Danube Island. In addition, ecological niches have been preserved or created. The water of the New Danube has - apart from high water - bathing quality. The Danube Island is also a natural reserve where rare bird, amphibian and fish species as well as deer, hares and beavers have settled.

The Danube Island and the left-hand high-water dam of the New Danube are a popular cycling and recreation area for the Viennese population, now also frequented by campers. There are also two barbecue areas and 15 parking places, as well as several other free places (eg water playground for children, beach volleyball and other sports fields, playgrounds, running checkpoints, water ski areas, dog zones, 32 WC installations with showers) and commercial facilities (catering, boat rental, water slide, wakeboard lift reachable with subway). In the north of the island (kilometers 17.7 to 19.5) and in the south, both on the left-hand high-water dam as well as on the Danube Island (kilometers 2.1 to 5.1) are two of the largest nudist bathing areas in the immediate vicinity of a large city.

Since 2010, the so-called "Island Service" has been managing the Danube island. This information team is on the other side of the Danube Island itself and on both flood protection dams with bicycles. In addition, information seekers can consult the Island info (about 350 m down the Reichsbrücke) from May to September.

The campsite "Neue Donau", which we are now visiting, is ideally suited as an intermediate stop on the way to the south as well as to the city tour to Vienna. The location on the Danube Island offers excellent opportunities for leisure activities, whether by bike or on foot, we will report more later.

Karlsplatz, Karls Church and the MuseumsQuartiers

Walk along the Danube and its old river beds