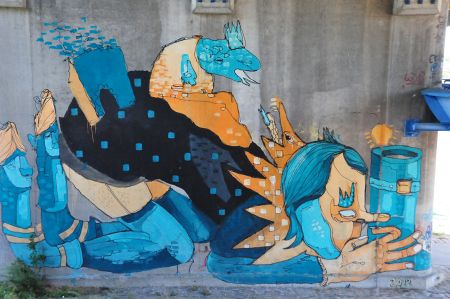 Our explorations within the framework of the project work of a route to the south allows us to meet again and again with the work of the so-called street art or graffiti artists, which are often so controversially discussed.

We were surprised at Durres in Albania, where the theme is addressed and where the work is more of an embellishment than a mess of otherwise dreary facades, had visited the Metelkova district in Ljubljana, known for its street artists. So now it is Vienna.

If one moves attentively, the view partially high in the sky, one might think that graffiti in Vienna has become "salonfähig", an expression meaning officially excepted. It is not the well-known anarchy characters and names that characterize these images, but really artistic works, which contributes to a new form of façade design under the term streetart and, according to the statement of many an opponents "really too beautiful to let them remove". So an almost legal version of Graffiti?

About 400 graffiti artists are currently on the road in Vienna, constantly in exchange with other cities, there is even something like a graffiti tourism. Very often the street artists are lacking in the areas to be designed, so that there are overlaps on facades that were not intended for this purpose. Understandably, the owners complain.

One of the responses to this was the opening of an already existing series of thematic passages in the MuseumsQuartier Vienna in September 2008 on the initiative of the quartier21, the "Street Art Passage Vienna". The passages have thus become places of exhibition in the public space, each dedicated to special cultural genres (comics, sound art, typography, etc.). The "Street Art Passage Vienna" is also localized in a location-specific way: accessible from Breitengasse, the bridge from Spittelberg the 90,000 m2 cultural area of the MuseumQuartiers has become a center of the Viennese Street Art scene.

In addition to the permanent design of the French artist "Invader", this public space lives from its changing exhibition program of international and local street art and graffiti artists as well as from an accompanying publication series. The street art magazine "betonblumen" is designed by the exhibiting artists and can be purchased directly on the spot at two specially integrated vending machines.

Of course there is still the "traditional" graffiti, which we encountered, for example, below the bridges of Danube, where the bleak gray of the concrete of the supporting pillars, let us recognize as beautifying the concrete. Here is some of the motifs:

On the way to Danube Island - Camping Neue Donau