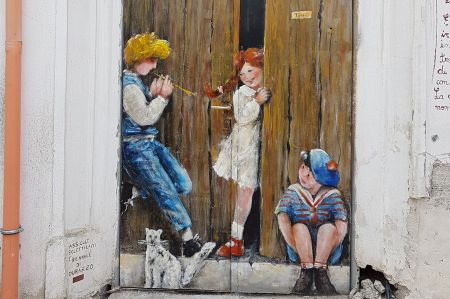 Who, dear readers, has not even discussed the topic of street art, graffiti or even the partial art form with pure facade smearing with friends or neighbors, so widespread has this phenomenon spread in recent decades.

For the one a curse of modernism, for the other a kind of art that is as diverse as the people themselves.

Streetart encompasses various techniques, materials, objects and forms of mostly non-commercial forms of art in public space, which, according to the intention of the "polluters", should remain there permanently. Street art refers to "self-authorized" signs of all kinds in the urban space, which want to communicate with another group of people. In contrast to graffiti, however, often the picture part prevails, not the artistic writing / painting of one's own name, with which the discussion is fueled further: If a dreary house wall is embellished by Streetart or is simply simple lubrication. 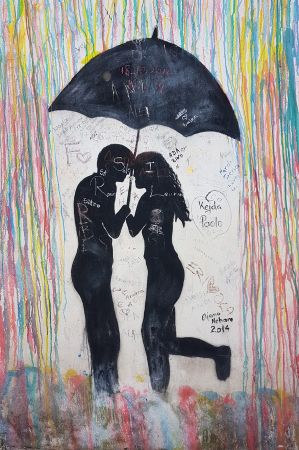 In 1968, Werner Nöfer and Dieter Glasmacher founded one of the first large wall paintings in Hamburg on the Große Freiheit. From about 2000, Street Art is an international movement. Before that, only individual artists have been running with what has been called street art since 2005. Previously, terms like post graffiti or Urban Art competed with Street Art.

Besides the self-authorized scratchwork from Pompeii, one of the first well-known writings in the urban area is Kyselak by Joseph Kyselak, who left his name on many walls during his hikes in the 19th century. Similar to the slogan "Kilroy was here" from the 1940s and 1950s, it was the early graffiti that was either carved into the wall or painted on the wall with paint. The American Graffiti or Stylewriting differs in the narrow sense of Street Art. Street Art, graffiti and art in public space or public art are often urban art. In the media and artist interviews, street art, public art, urban art and graffiti is often not distinguished.

Many street artists come from the graffiti scene or the punk scene. In addition to graffiti, outdoor advertising is described as the next relative of street art. In the course of the industrial revolution, a market for advertising was created in the form of painted advertising on facades of houses. Just like poster and facade advertising, propaganda art has a stylistic effect on street art. 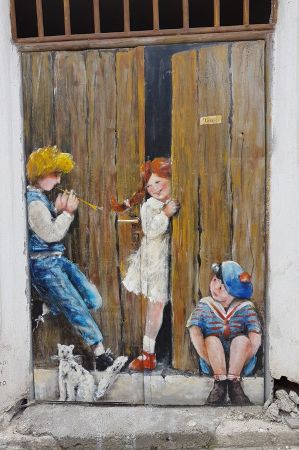 The artists use various media (markers, brushes and paint rollers, spray cans, stickers, posters etc.) to present their works. Frequently, walls are painted and glued, but also electricity boxes, lanterns, traffic signs, telephone boxes, trash cans, traffic lights and other city furniture, as well as citizen walks and streets and even trees - in principle all imaginable subsoils - are designed. In this case, street art is generally restricted to the design of existing areas. As the techniques of street art often cross with those of graffiti, it is now difficult to distinguish between the two terms.

Although commissioned by private landowners or also municipalities such as Blek le Rat, Tribute to Tom Waits in Wiesbaden, the works are mostly illegally. This is why most artists also prefer to remain anonymous - often members of the scene know each other just with their pseudonyms.

The motivation for many people is to have fun in the matter and the possibility to shape their own environment in an anarchistic and / or creative way, as well as to create an artistic counterpoint to omnipresent advertising or gentrification; For many, the egocentric tendency to spread its artist name as often as possible plays a role. Streetart often deals with consumerism, capitalism and public order. Sometimes even the beautification of a otherwise dreary facade. But judge yourself.

Durres on Via Egnatia - city tour and Roman history