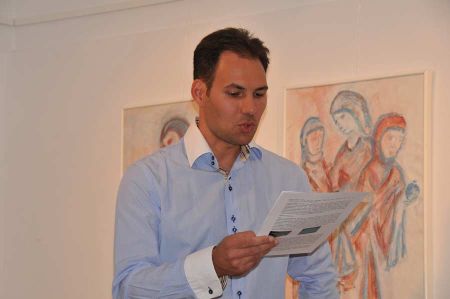 The following supplementary, by Mrs Susanne Ganter-Ullmann, head of the group of artists "JETZT" from Brunn am Gebirge, reached us on the subject of Egyptian Blue:

I quite accidentally heard that there are highly interesting findings in the Brunn Roman Museum. In the course of my research I came across Dr. Robert Krickl. He told me that the extraordinary in this is the representation of a Pannonian woman origin on a stone slab used by the Romans. In this illustration, natural color and one artificial color was used: "Egyptian Blue". At that time he wrote a scientific paper about it and was immediately impressed by the idea of producing the color according to old recipes in various test series.

We worked in the studio of Sonja Krainz, where we could see the colors burn. Her husband Bruno proved to be a technical genius. He built high-tech mills with which we were able to grind this color pigment to the required consistency for us.

Every artist of our group JETZT took an epoch about Woman in Egyptian Blue:

Kapellmeister Wolfgang Belly finally composed, including the sounds that emerged in the manufacture to produce the color musical patchwork pieces to each epoch, adding these pieces into a musical collage, which he presented on the occasion of the reading of Dr. Robert Krickl.