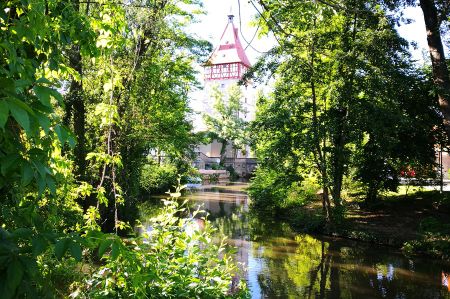 And again, our hosts, Heidi and Rainer, had come up with an interesting bike tour that was to guide us through the wonderful Lower Remstal to the city of Waiblingen, which is a medieval town known for its connections with the royalties of Staufer. Especially the Old Town area, with its magnificent half-timbered houses, points to the long history of the city, which was particularly important in the Middle Ages.

In the region, finds of the ancient and middle stone age are known. In Waiblingen itself,  settlements of various prehistoric epochs have been found, starting with the culture of the linear barb ceramic (around 5000 BC). The Celts continued the settlement history of the region. In Roman times there was a handicraft settlement at Beinstein, in which also high-quality tableware (Terra Sigillata) was produced. In the district of Hegnach, further indications of a brick kiln were discovered.

In the Alemannian period, the area around today's Waiblingen city center developed into a political, economic and ecclesiastical center. There are several burial grounds of the Merovingians in the surroundings of the city. After the permanent annexation of the former duchy of Alamannia by the Franks in the blood court at Cannstatt in 746, Waiblingen became more and more a center of the Frankish royal government and it moved into the possession of the Karolinger.

A royal column was built, which showed Emperor Charles III. For the first time in written documents Waiblingen was mention. In 887 there was a court day mentioning Waiblingen too. The Palatinate, which has not been archaeologically proven, is assumed to be in the area of the Old Town. Waiblingen also remained under the following rulers dynasties of the Ottones, Salier and Staufer Königsgut, until it was surrendered to Württemberg before 1253, probably around 1200. The Staufer Friedrich I, better known as Friedrich Barbarossa, was possibly born in Waiblingen in 1122, but this is not known for sure. At any rate, the Staufers in Italy were called Ghibellines (Italian for Waiblinger), for their campaign the word "Waiblingen!" was shouted.

The Staufer (formerly sometimes called Hohenstaufen) were an aristocracy, which, from the 11th to the 13th century, created several Swabian dukes and Roman-German kings and emperors. The non-contemporary name Staufer derives from the Hohenstaufen castle on the mountain Hohenstaufen on the northern edge of the Swabian Alb near Göppingen. The most important rulers from the aristocracy of the Staufer were Frederick I (Barbarossa), Henry VI. and Friedrich II.

The first precisely verifiable date of the family history and at the same time an important station for the increase in the significance of the Staufer to one of the most important noble families of the empire is the year 1079, when the Salier Henry IV, Roman-German king and later emperor and gave him his daughter Agnes von Waiblingen as his wife.

Agnes of Waiblingen was engaged as a seven-year-old on 24 March 1079 with the first Staufer-Duke Friedrich I of Swabia. Her father, Henry IV, wanted to bind Frederick, one of his most important comrades, by this engagement and the simultaneous elevation of Frederick to the Duke of Swabia. Agnes became the mother-mother of the Staufers, who later founded their claim to the German king's crown with the descent from the Salier.

After the death of Frederick in 1105, Agnes von Waiblingen was succeeded by his brother, the later Emperor Henry V, in 1106 with Babenberger Markgraf Leopold III. Of Austria. This was thanks to the fact that Leopold, in the autumn of 1105, when Henry had risen against his father, Emperor Henry IV, together with his brother-in-law, Duke Borovoy of Bohemia, beat himself from the side of Henry IV to his son's. This made the situation of the old Henry hopeless, he had to flee and died 1106 as a hunted in Liège. Through Agnes a close relationship was established between Staufern and Babenberger.

Around 1250, the municipal law was awarded to Waiblingen. A direct proof of Waiblingen's mediaeval importance in Württemberg is provided by the 1287 founding of the present district of Neustadt on the Rems ("Nova Civitas"), which should weaken Waiblingen.

Until the end of the 14th century, the old town in Waiblingen was further expanded. The Michaelskirche outside the city walls and the outer Stadtmauer-Ring and also the Zwinger were built. In addition, the city gates were increased and equipped with coats of arms such as, for example, the coat of arms of Eberhard I (Württemberg, Herzog), erected in 1491, at the Beinsteiner Torturm.

In the Thirty Years' War, Waiblingen fell victim to the imperial and Spanish troops, which had fallen after the Battle of Nördlingen in 1634, into the no longer defended Wurttemberg: the town was plundered and set on fire. Only a few houses, outside the city wall, escaped destruction. Reconstruction from 1640 onwards was slow due to the following severe population loss.

After so much history and visiting some really interesting and architecturally impressive buildings, we had earned a break that we wanted to spend in the beer garden on the Remsinsel. Said and done. Again we were impressed, this time however by the size of the beer garden and the surrounding parking lot, which was divided by the water courses of the Rems into several sections. A truly imposing daytime destination this Waiblingen is.