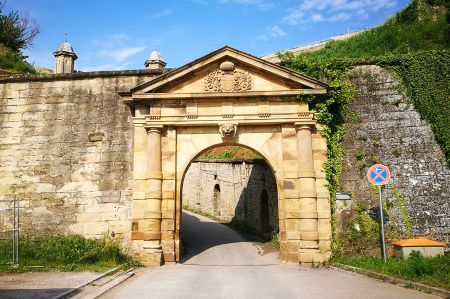 Our tours along the Celtic cycle path finally brought us to the Hohenasperg, thecastle mountain, which was already settled during the Stone Age and by 500 BC was even a Celtic princely seat with an escape castle.

Today, according to Rainer, Hohenasperg is "Württemberg's highest mountain": it only takes five minutes to get up, but years to get down again. Of course, something surprising, we quickly asked how that is meant. The explanation follows on the foot:

For several centuries, the former Hohenasperg fortress has been used as a prison, nowadays the Hohenasperg prison and the Social Therapeutic Institution of Baden-Württemberg are located in here. From the late Middle Ages to the 20th century, Hohenasperg was almost continuously used as a prison for lawfully convicted offenders as well as for "political prisoners". Because of the many, sometimes also politically active, imprisoned intellectuals from the 18th to the 20th century, folks also called the fortress "House of the Swabian Intelligence".

Many of the Celtic cemeteries and cult sites in the vicinity are arranged in such a way that they offer an unobstructed view of Hohenasperg. As samples you can mention the large hilltop at Hochdorf or the tomb at the Katharinenlinde near Schwieberdingen. The Kleinaspergle, situated on the southern edge of Asperg, has a particularly good view of the Hohenasperg. It has been known since the excavation in 1879, that it is a Celtic hill grave.

The area around the Hohenasperg was occupied by Roman troops in 85 AD and from then on belonged to the Roman province of Upper Germania. At the so-called Neckarlimes, military camps and civilian settlements developed, as examples there are Walheim and Benningen. Possibly the Romans also used the strategic position of the Hohenasperg. In the hinterland of the Neckarlimes, the Romans established numerous manor houses (villae rusticae). On Asperg areas there are three such farms already.

Around 260 AD, Germanic tribes, later called Alamanni, succeeded in penetrating into the Roman-occupied southwest Germany. Then the Romans withdrew to the Rhine border line. The abandoned estates and fortifications were hardly used by the Alamanni; They preferred their traditional wooden construction. Graves in the vicinity of the Hohenasperg indicate settlements by Alamannen and Franks.

After the defeat of the Alamanni against the Franks around the year 496, the area north of the line Hornisgrinde-Hohenasperg-Hesselberg came under Franconian sovereignty. At thetime the name was "Ascisberg". The border between the two Germanic tribes was south of the Hohenasperg. It also later formed the border between the two bishoprics of Constance and Speyer. On the mountain, a Franconian mansion and a church consecrated to St. Martin were placed at the time. This church became the "priestly parishioner" to the Christianization of the environment. For almost 800 years the Asperg remained in the dominion of the Franks.

For the first time some documentary were made as early as 819, when the Gaugraf Gozberg donated his property to the monastery Weißenburg in Alsace. However, it was only in the 13th century that the town became more important when the town Hohenasperg, which was independent until 1909, was founded. In 1510, Asperg was also granted municipal law. In 1519, troops of the Swabian League under Georg von Frundsberg besiege the Hohenasperg, as Duke Ulrich of Württemberg resides in the fortress.

On May 12th, 1525, the farmer Jäcklein Rohrbach was taken prisoner by the Burg Vogt of the Asperg and fixed there until delivery to the Truchsess of Waldburg. From 1535 the mountain was built as a fortress, the inhabitants were resettled to the foot of the mountain.

In the Thirty Years' War the castle was defended against a siege by imperial troops from 1634 to 1635 by a Wurttemberg-Protestant occupation, reinforced by Swedish troops. The siege ended with the surrender to the imperial troops.

After the Thirty Years' War, the fortress again entered Wurttemberg. In 1675 Duke Wilhelm Ludwig had the entrance portal to the fortress, the lions gate, built in the style of the early baroque as the only access to the fortress. Above the arch is an inscription, the year and the four-part ducal coat of arms. In 1688 and 1693 Hohenasperg was occupied by French troops, after which the plant lost its importance for the defense of the country and became a garrison and a state prison. In 1718, Asperg was incorporated into the Ludwigsburg Supreme Court, but already seventeen years later, the seat of its own office. In 1781 the final integration into the Oberamt Ludwigsburg took place.