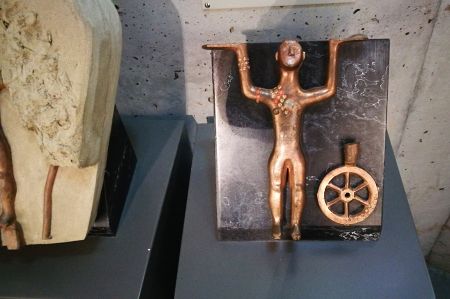 Very extensively we had visited archaeological sites from Greek and Roman antiquity during our camper-cultural trip, had discussed their dissemination areas and cultural achievements, and had repeatedly encountered the Celts and their cultural assets.

It is not known to all culturally interested readers that the Celts in their wanderings have reached as far as Central Anatolia and have even settled large areas around today's Ankara. Here, however, they were designated as Galatians, and certain concepts in the language of speech today still point to their Celtic origin.

No wonder, then, that we wanted to use the time of our stay in Germany together with the travel participants Heidi and Rainer from the Stuttgart area, to follow the traces of the Celts somewhat deeper, precisely because there are several graves from Celtic times and in 1978 a completely untouched Celtic hilltop was found. The artifacts found in it were the occasion for the construction of a museum, whose architectural design also took up elements of the funerary mound. The metal arch on the front of the building represents the burial mound, which is located under this arch in the same place as it was once found in the real grave. The replicas were made with iron-age technique, the original finds are presented in the Landesmuseum Württemberg in Stuttgart.

Since the tomb had not been touched before the excavation, particularly spectacular finds could be made here. The dead man was equipped with ample supplies. The tomb was richly embellished with textiles; Probably most of the objects were originally packaged in textiles.

On a four-wheeled wagon littered with decorated iron plates, an ax, a lance, an iron knife, and stacked dining utensils with three bronze basins and nine plates, were found.

The personal belongings of the dead also include:
• an imported 500 liter bronze boiler, originally two-thirds filled with honey beer
• an extensive drinking service with nine drinking horns decorated with gold ribbons
• a golden drinking and scoop cup
• a bronze / iron dagger with gold plating
• a quiver with a bronze and thirteen iron arrow tops
• a pouch with a nail cutter, razor, comb and hook
• a hat made of birch bark
• a gold neck ring and bracelet
• five amber beads
• Bronze and gold snakes
• Belt of gold

The gold fittings of the shoes were made especially for the burial and served exclusively for the presentation of the recipient.

The most spectacular piece of discovery, however, is the 2.75 m long bronze kline. It is worn by eight female figures with a wheel between the legs. The backrest is figuratively decorated, the depictions show three sword dancer pairs and two carriages, on each of which a figure stands.
In the summer, the Open Air Museum regularly organizes a program on the iron age. There is a series of lectures organized by the Celtic Museum, and special exhibitions on similar finds or special themes, such as gold jewelry, are shown at the museum.

If you would like to explore this region of the Celtic tribe, the hiking trail is also recommended, which we will report about shortly later.

The population of Turkey