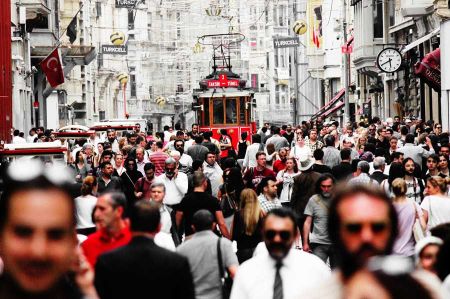 Dignity, noblesse, righteousness, enormous stamina and bravery are some of the characteristics of the Turks. They are relatively reserved and not that gossipy like some of their neighbours.

Also, typical southern discretion isn´t that strange to them. They are much more like the ghost in the bottle which stays calm until someone opens the bottle and the volcano explodes.

Who are the Turks?

For centuries experts have been discussing this question. How could it be that just a small number of Turkish interlopers from the steppes of Central Asia (between the Caspian Sea and Mongolia) was able to impose the Turkish mentality and lifestyle onto an already existing mixture of different people in a short time without them being overwhelmed and all of a sudden without any loss of blood or mass deportation of the people living here. The people living in that area were a huge collection coming from everywhere: Hethitians, Phrygians, Lydians, Celts, Jews, Greeks, Romans, Armenians, Kurds and Mongolians. Just a few Turkish interlopers were enough to change a Greek or Armenian speaking Christian population into Turkish speaking Muslims, which from that point on called themselves Turks. "Ne mutlu Türkum diyene" (Thanks to God to be a Turk) is a famous saying of Atatürk, and can be found everywhere written on flags or walls. "Biz bize benzeriz" (We are equal with each other) is another remark of Atatürk which awakens the national enthusiasm of the Turks.

From the Turkish point of view the original Turkish mother country, situated from the Caspian Sea to Mongolia, is the cradle of civilisation it is taught this way in Turkish schools during history lessons even today. One group of people moved in an eastern direction and founded the Chinese civilisation about 7000 B.C., another one moved to India, the next one (the Celts) moved to parts of northern Europe, to the south into the Near East and to North Africa. This is the reason why Greek and Roman culture is the successor of an earlier Turkish culture which had been founded by Phrygians, Lydians and Hethitians.

The Turkish personality is characterised by a sense of extreme anticlimax. Turks are diligent, but see hustle and commotion as senseless; serious but clingy; they try to emulate one of their folk heroes, Nasreddin Hoca. They respect the authority of the government, but they insist on their democracy. They are sociable, nice and hospitable. Even though most of them are poor, money does not mean everything to them. To them, the most important thing is trustworthiness and honour. Theft is seen as the most embarrassing of all crimes and because of that is seldom seen in the countryside. Nothing is more despised than somebody losing his self control, so it does not make sense if you lose your temper in front of a Turk. Trust between men, instilled by military service, is really important for Turkish males. To join the army for about 18 month is, to the Turkish mentality, a kind of important and strict extra part of education where, quite often, young Turks start learning how to read and write and learn the basis of what will be their later profession. Turkish officers, mostly from middle class backgrounds see themselves as nobility and as the social conscience of the nation. All Turkish reforms have taken place over about the last 70 years. Now Turkey is trying to become a member of the EC. Most of the new and necessary steps to achieve this aim have already been put in place by the new government.

The Diversity of People

Lot of ethnic and religious minorities live in towns like this, holding important jobs in the government or in the private economy. They are part of a mosaic of people from different backgrounds which is so typical of Asia Minor. Celebrities, actors, journalists, poets and writers meet in their bars.

Young people meet in coffee bars discussing the future of their land or commenting on what is happening now. Intellectuals have given up their revolutionary ideas of the sixties and reduced them to the classical question: What will be and when? Which is now discussed over beer and wine?

Turkish intellectuals, both men and women, have many characteristics which are common everywhere in the world. They are open, talented, well-travelled, speak different languages and are always happy to discuss their opinions. They can be helpful and happy partners for you on your travels. What you should bear in mind is that, deep in their hearts, they share common beliefs with other Turkish people, whether you are discussing loyalty to the country and the society, family unity, or fairness and respect for traditions. Remember this and you will find they will become close friends.