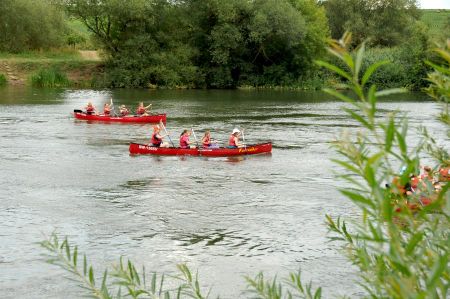 We spent yesterday's Sunday afternoon in the vicinity of Volkach on the Mainschleife, where, thanks to the excellent local knowledge of our "tour guide" Brita and her friend Gerda, we were given a compact presentation of some of the local sights.

It was she who then took us along the Main loop to the village of Köhler for lunch, where we could stop off right on the banks of the Main. The village of Köhler consists of a row of houses at the foot of the vineyards towards the Main, but the only restaurant was well frequented by motorcyclists and other guests passing through. It's still difficult for us to get used to the exact lunch times, because lunch is only served almost everywhere between 11:30 a.m. and 2:00 p.m., but it was also possible to get a hearty snack in Köhler as a substitute.

You can let yourself be carried away by the current 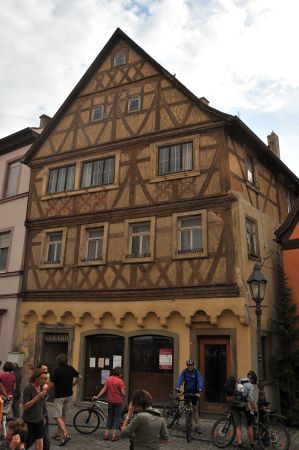 Once seated, it was wonderful to watch the river and the hustle and bustle on the water. In addition to a few motorized inflatable boats and a sports boat, there were a large number of canoes of different sizes, which were steered down the Main by their users during our lunch break, using the current of the river to have fun on the water. Groups of young people, probably members of canoe clubs, but also families with animal companions, in one case two stately greyhounds, could be observed in this way. Canoeists also stopped several times directly on the bank to the restaurant to treat themselves to a short break with coffee and cake.

The fight of a canoe group against the current up the river was difficult to master. Her strokes with the paddle did little to move the canoe forward. In contrast to rowing, there is no fixed connection between the oar and the boat in a canoe, so that you cannot use the leverage of the long oar and you have to use your physical strength alone to propel the paddle. Always looking in the direction of travel, on the other hand, it is very pleasant if you can let yourself be carried by the current and “only” have to correct the direction with the paddle. 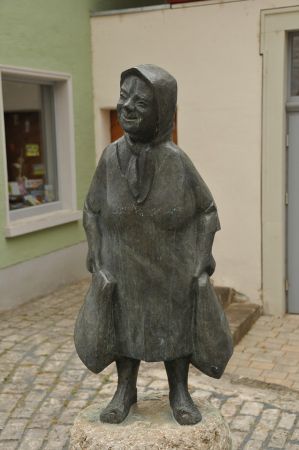 English captains brought canoeing to Europe in the 16th and 17th centuries, and English students brought it to Germany in the 18th century. Today, canoeing can be found among the population as a widespread leisure activity on many rivers, as a whitewater sport in competitions in different categories, with even different boating materials being used. Originally, two types of boats could be clearly distinguished: Kayaks, the closed canoes mainly used by the Inuit, and Canadians, the open-topped canoes. Modern canoes are often a mixture of both types of boats. Despite the mixing of the two boat types, the paddles are considered to be the most important distinguishing features in addition to the seating position, because kayaks use a double paddle while Canadians use a single paddle.

The folding boat was invented before the mass sport of canoeing began, because it was often difficult to transport the canoes back down the river. So it is not surprising that the sport was initially able to spread to northern and central Germany, since the rivers there usually have less strong currents. 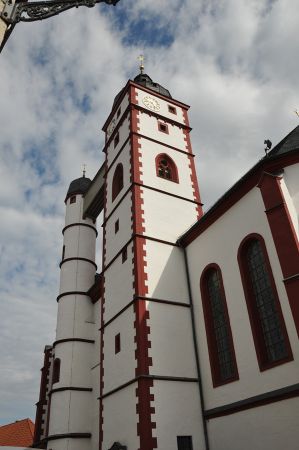 Founded in many cases by English students, the sport spread mainly via Leipzig, Berlin and Hamburg. The first races were held in 1862 during a rowing regatta in Budapest.

The Alster Canoe Club, founded in Hamburg in 1905, is the oldest German canoe club, and the German Canoe Association was also founded in Hamburg in 1914. The first championships took place in Germany in 1919 and in 1924 canoe racing was presented at the Olympic Games in Paris for the first time. In 1934 canoeing was confirmed by the IOC as an Olympic sport.

During the 1972 Olympic Games in Munich, four new Olympic disciplines in canoe slalom were introduced on the Eiskanal in Augsburg and Sideris Tasiadis from Augsburg has just become a silver medalist at the Olympic Games in London. 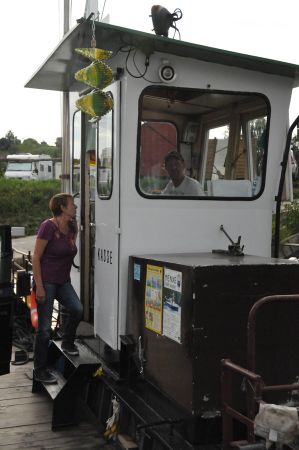 For the many recreational paddlers on the Main, these partly historical backgrounds are probably completely irrelevant in the exercise of their leisure activity, but they are interesting nonetheless. Isn't it just wonderful that you can do leisure sports again, even go swimming, in and on the rivers in this country. I can remember only too well that it was forbidden almost everywhere to go swimming in the rivers due to heavy pollution.

As confirmation, we arrived a little later at the Main ferry from Mainstockheim to Albertshofen, where we can see the sandy beach of Albertshofen, small but "mighty" on the opposite bank. Many families use the small section of beach for a Sunday afternoon swim in the Main.

The mobile home of a Swiss couple right on the banks of the Main next to the beach section was also interesting: a double-decker London bus that had been converted into a mobile home and was red like the original buses. Of course, we quickly got involved in an intensive conversation with the owner and learned a few details from the history of this extraordinary vehicle. 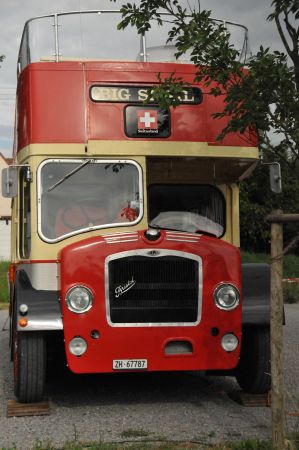 After the bus had been taken out of service, the current owner bought the vehicle, planned it carefully and converted it into a mobile home himself. In addition to a kitchen with dining area, there is even a roof terrace on the upper deck, which is suitable for sunbathing or relaxing. The bedroom is also on the upper floor and can also be used for living with standing height thanks to the lifting roof.

The engine and transmission have been completely overhauled before being put back into operation, all facilities from the gas system to electricity and battery operation have been officially tested and approved, TÜV has been approved and declared ready to drive. A great self-build that will certainly attract attention everywhere.