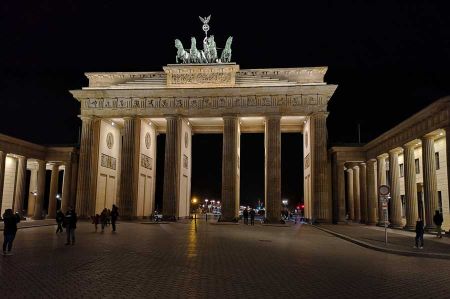 An exciting exhibition day in Berlin had come to an end, so we decided to take a walk from well-known Alex along the boulevard Unter den Linden to the main train station. But first, we went from Adlershof to Alexander Square by S-Bahn, popularly referred to briefly as Alex.

Alexander Square is located on the northeastern edge of the historic center of Berlin. The almost rectangular square in the district of Berlin Mitte goes back to the square in front of the "King's Gate" and received its present name based on the Russian Tsar Alexander I in 1805.

Starting point at Alexander Square with the mighty TV tower 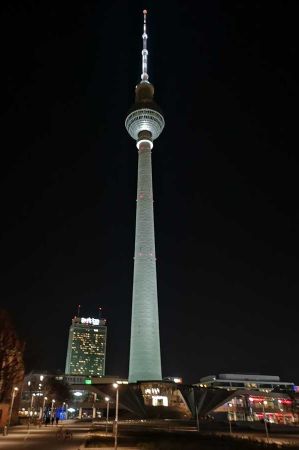 At the beginning of the 1930s the redesigned place together with much of the surrounding buildings suffered during Allied air attacks from significant destruction during the Second World War. The East Berlin administration had cleaned the area of ​​the square in the center of the GDR capital except for the Alexander and Berolina house in the 1960s and nearly eliminate and cleared away the historical buildings, so the square became pedestrian zone and by that was enlarged to about eight acres. On this now four times larger surface, developed to 1970, the Interhotel Stadt Berlin and the HO-Centrum-Warenhaus, which continue until today as Park Inn and Galeria Kaufhof.

With more than 360,000 passers-by tourists a day, Alexander Square was the fourth-busiest square in Europe in 2009 and is, according to a study, the most visited area in Berlin, in front of the City West around Kurfürstendamm and Tauentzienstraße. It is a popular starting point for tourists who can reach lot of attractions such as the TV tower, the Nikolaiviertel and the Red Town Hall reachable from the two stations of the same name of the suburban train (Stadtbahn) and subway. The shopping centers Alexa and the Mitte, the Rathauspassagen and the Galeria Kaufhof also have several large retail locations.

Via Museum Island to the boulevard Unter den Linden 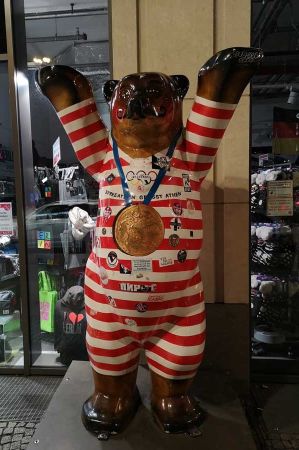 We continue to the Museum Island, which today forms the northern tip of the Spree Island in the historic center of Berlin. It is the nucleus of Berlin's museum landscape and, with its five museums, is now a much-visited tourist destination and one of the most important museum complexes in the world. Since 1999, the Museum Island has been a UNESCO World Heritage Site as a globally unique cultural and architectural ensemble.

The northern part of the Spree Island was a swampy floodplain until the Middle Ages. This resulted in peculiarities of the subsoil. While the town of Cölln was built on the southern, slightly higher part of the island in the 13th century, the northern part was used much later than the garden which belongs to the Berlin Castle. In the 17th century, the left Spree arm was channeled. The result was today's copper ditch, which drained the northern part of the island. Between the Spree and Kupfergraben was the Cöllnische Werder, on which a pleasure garden was created after the middle of the 17th century.

The boulevard Unter den Linden in Berlin is the central boulevard in the district Mitte. It leads from the Pariser Platz on the east side of the Brandenburg Gate, where the new building of the Academy of Arts and the famous Hotel Adlon are located, about one and a half kilometers through the Dorotheenstadt and Friedrichswerder again in the direction of Alexanderplatz with the TV tower. Behind the arsenal at the eastern end, it passes the Schlossbrücke over the Spreekanal to Schlossplatz on Spreeinsel.

And then the Brandenburg Gate 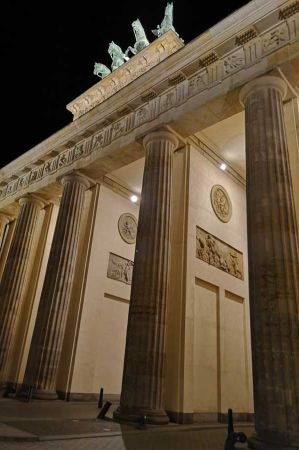 Well recognizable from a distance, the Brandenburger as an early classicist triumphal gate, which stands on the west flank of the square Pariser Platz in Berlin's Mitte district. It was built as a conclusion of the central boulevard of the Dorotheenstadt, the boulevard Unter den Linden, in the years 1789-1793 on the instructions of the Prussian King Friedrich Wilhelm II to designs by Carl Gotthard Langhans. The sculpture crowning the gate of the Quadriga is a work based on the design of the sculptor Johann Gottfried Schadow. West of the Brandenburg Gate are the extensive green areas of the Great Tiergarten, which are crossed in straight extension of the boulevard Unter den Linden from the Road of 17 June. The plaza just west of the gate bears the name Platz des 18. März.

The gate is the only surviving from at last 18 Berlin city gates. In its formal language, it represents the turn from the Roman to the Greek model. It is one of the first classical buildings in Prussia and marks the beginning of classicism as a state-supporting architecture in Prussia.

The Brandenburg Gate is one of Berlin's most famous landmarks and national symbol, with many important historical events of the 19th and 20th Century which are connected. Thus, until the Second World War, especially the end of Napoleonic rule 1813 - 1815 is connected to the building. Every year on the 11th of August the Constitution Day was celebrated here during the Weimar Republic. After heavy war damage the gate was rebuilt until 1957. A comprehensive, nearly two-year renovation took place until 2002 done by the Stiftung Denkmalschutz Berlin.

Through the government district to the main station 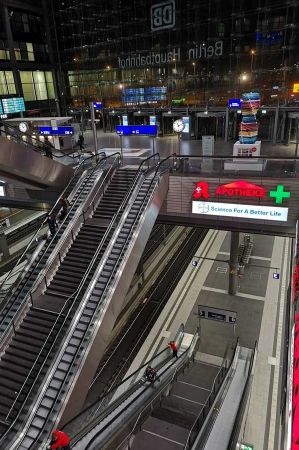 In the middle of the huge Berlin government district, in which the main institutions of the executive (Federal Government) and the Legislative (German Bundestag) have their headquarters, we continue towards the main station. The core of the "political center" of the capital is formed in particular by the Federal Chancellery, the Reichstag building and the neighboring Bundestag buildings Paul-Löbe-Haus, Marie-Elisabeth-Lüders-Haus and Jakob-Kaiser-Haus.

The glass palace Berlin Hauptbahnhof is next to impressive architecture the most important passenger transport station in Berlin and at the same time the largest tower station in Europe. With its daily about 300,000 passengers and visitors, it is ranked fourth compared to Hamburg, Munich and Frankfurt (Main), the most frequented long-distance train stations of the Deutsche Bahn.

The junction stationed 14 platform tracks in more than five story’s one above the other is a transfer point between distance passenger (Inter City Express, intercity / Euro City, OBB Nightjet) and local traffic (S-Bahn, regional train, Regional-Express).

The connection to the Berlin Underground via the subway station of the same name, which is still the endpoint of the 1.8 kilometers long line U55 to the station Brandenburger Tor, remains until the closing of the gap to Alexander Square station by the western extension of the line U5 like a torso. If this goes into operation according to the current planning in 2020, the U55 will merge in the U5. We were curious whether the planning chaos of airport Berlin will be repeated here?