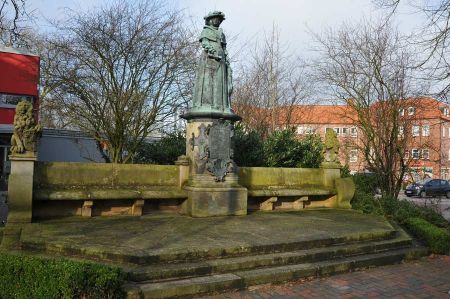 Green City Jever - not without reason Jever is named as the green city because the town is heavily influenced by the five elongated moats with its ancient trees that once surrounded the historic center as a moat protective layer.

The construction of this originally annular watery moat plant took place in 1536 with the erection of earthen walls to secure the newly appointed city of Jever thanks to the first mistress Miss Maria. But more on that later.

About three wooden gates with bridges lying in front of visitors to the city when arriving to the town. Today only street names remind to the former city gates, such as "At St. Annentor". With the beginning of the 19th century, the earthworks have been eliminated and the gates with its bridges were demolished, the moats lying there were filled with earth for easier crossing. The difference in height between the Old Town area and the outside settlement area (for example in the area of the entry of the Schiller Street) are partially still visible.

The now remaining five separate moats are called Duhmsgraft and Pferdegraft (horses moat) on Elisabethufer next to Blank Graft (shivering moat) on Von-Thünen-Ufer following Prinzen Graft (princes moat) at Regional County Office and the Schloss Graft (castle moat), which forms a separate annular moat system around the Castle of Jever. Today the moats, with their manicured greenery and centuries-old trees are forming a green ring around the historic old town, which invites you to taking a walk and to relax. We start our walk along the moats on Elisabethufer or better at the end of Duhmsgraft to St. Annen Straße at the Mitscherlich monument. The circular route is way marked with a white lapwing.

The monument to Eilhard Mitscherlich is newly based on the ramparts and dedicated to Mitscherlich for the years living in Jever cause the scientist was born close by in Neuende. The monument is a detailed replica of the Berlin original, which was created in 1894 for the 100th birthday of the scientist designed by the sculptor Ferdinand Hartzer. Since 1919 the original version is placed in Berlin at the east wing of the Humboldt University. The monument in Jever was inaugurated on September 6th, 2006 and is the second monument of the naturalist, as there was already one with the same statue at the site from 1896 to 1954.

We follow the Kiebitzweg by passing Karl Jaspers Alley and get to the Schlosserplatz with the monument of Friedrich Christoph Schlosser, who was born in Jever in 1776 and who studied theology in Göttingen from 1794-1797. He wrote several theological theories. After graduation he was first tutor and from 1808 vice-principal in Jever. In autumn 1809 he left Jever, went to Frankfurt and wrote his first historical descriptions. 1810-1819 Schlosser was Professor at the Municipal School, from 1812 to 1814 at the same time at the Lyceum Carolinum, a foundation of the Frankfurt Grand Duke Karl Theodor von Dalberg.

Our route takes us along the Prinzen Graft, which was once connected to the Schloss Graft and thus closed the ring around the Old Town. The system of the present castle park goes back to the year 1838. It was modeled on the so-called period of English Landscape Gardens, which have been developed in the form and style of 18th century England. In addition to known European hardwood (eg beech, oak, linden) the Castle Park offers also some exotic trees. These include the North American tulip tree, the Southeast Asian Katsura and a native of the southwestern China dawn redwood tree. We circle the castle park and get to the gates of the court, where we meet the monument "Fräulein Maria (Miss Mary).

It is the most famous monument of the city created by the Berlin sculptor Harro Magnussen (1861-1908), the image shows the former regent Maria of Jever in courtly dress, facing the view of the former Royal Palace Jever. In her right hand she holds the deed to the town charter, the left hand is on the head of a seated greyhound next to her. The 2.20-meter-high and 550-kilogram heavy statue was cast in the foundry Gladbeck in Friedrichshagen and inaugurated on September 5, 1900, the 400th birthday of Maria.

The striking building "Hof von Oldenburg" at the Old Market 14 is a historic restaurant, which was built in 1798 as one of the first buildings outside the protected areas of the city. An inaugurated Glockenspiel "Hof von Oldenburg" shows the most important rulers of Jever country several times a day. In the order of their appearance: Edo Wiemken the Younger, Maria von Jever, Count Anton Günther, Prince Johann August of Anhalt-Zerbst and Catherine II of Russia;. all equipped with various insignia of their dominion over Jever. To the figure circulation the 16 bells of the carillon play different folk tunes.

In the old town there are numerous well-preserved residential buildings. Despite some crashes and remedial fallings at Hopfenzaun and on Drostenstraße, where in 1975, among other things Drostenhaus fell as a victim, the ancient feeling of downtown with its often plastered brick buildings remained preserved in large parts. Typical are the many high-quality sandstone portals of the 18th and 19th centuries. A larger number of historic homes can be found in the area of the church square.

Particularly noteworthy is the Gasthaus Am Kirchplatz 14 called "Schwarzer Bär", a two-storey brick building from 1562. The house Am Kirchplatz 1 is dated from 1661 and the location near the town hall Am Kirchplatz 9 with its bell tower was built in 1715. The non-associated Rococo portal but was inserted as previously facade made from baked brick, was fitted with a plaster. In the nearby Wanger Straße 8 there is a packhouse with centrally mounted hatches built in 1650. The building Wanger Street 14 was built in 1823 on a portion of the filled-in moat as Stadtwaage and tavern.

From the afore mentioned Drostenhaus just the portal dated from 1756 was preserved, which has been integrated in the construction of Hopfenstraße. Even outside the fortified city core some notable dwellings remained. At the Schlachte there is the so-called House of the faithful, which is equipped with a sandstone portal in Rococo design. It was probably built in the first half of the 18th century and extended by a window axis to the West before 1890.

The blue print manufactory Jever is located in an old warehouse in the street Kattrepel since the 1980s. It is one of the few places in Germany where the traditional craft of the ancient East and North German blue print is still practiced. Here fabrics are dyed by hand printing with indigo blue and then washed to be shown on the fabric white blue print pattern on a blue background. In the workshop and in the print shop, visitors can learn about the craft and watch the individual steps.

The Friesian brewery Jever brides beer since 1848, named after the city Jever eponymous beer. The brewery employs approximately 270 employees within its modern production plant and fills about 60,000 bottles Jever Beer per hour. In the mirrored Gärtürme at Elisabethufer are five tanks of 240,000 liters each, in which the green beer is stored for three to four weeks prior to bottling at -1 ° C. The brewery offers tours by appointment of the production site together with an expert guide. The tour also includes a walk through the connected historic brewery museum. Here you get an insight view into the daily brewery business, as it was done around 100 years ago.