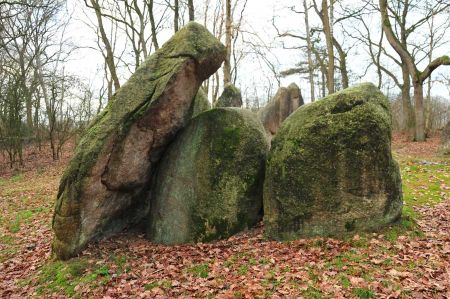 Our trip to the north had brought us again to the road of megalithic culture, one of the holiday streets in Germany and as such the Lower Saxony section of the "Megalithic Routes".

Since August 27, 2013, the "Megalithic Routes" have been officially recognized as Cultural Routes of the Council of Europe. On this day, the Danish part of the cultural route was inaugurated.

The road of megalithic culture should contribute to a better understanding of the lives of people who lived in northwestern Germany over 5000 years ago. At the 33 stations, the grave function or construction, the otherworldly conceptions, the understanding of nature and everyday life are thematized. 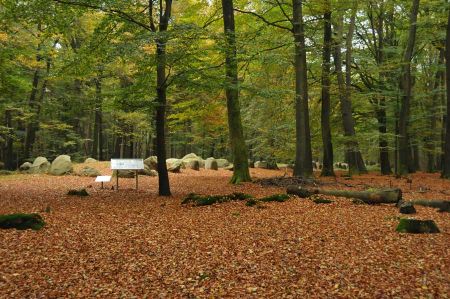 The “Ferienstraße” in some cases leads to Bronze Age and Iron Age burial mound groups from more recent times. The street will be supervised, as well as the project "Megalithic Routes" as a whole, by the resident of Osnabrück "Association Megalithic Routes e. V. ":

“The Route of Megalithic Culture serves as a platform for scientists, museums as well as tourism experts from Germany, The Netherlands, Sweden and Denmark to underline the outstanding importance of the megalithic culture for European history, to rediscover and promote the tourism value of its monuments and, in this way, improve their protection as part of the common cultural heritage.”

Street of Megalithic Culture - other destinations along the route 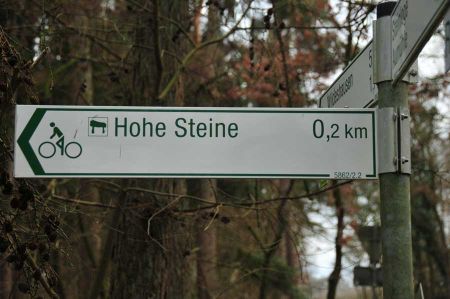 A leaflet for the street of the megalithic culture, in addition to the numerous Stone Age stations of the megalithic culture, points out other sights along the road too. These are in particular the city of Osnabrück with the Museum of Cultural History, the castles in the Osnabrücker County, the Iron Age House Darpvenne, the Old Alexander Church Wallenhorst, the Museum and Park Kalkriese, the clothier Museum Bramsche, the monastery Malgarten, the pin Börstel , the city Meppen, the Hüvener mill, the castle Clemenswerth, the museum village Cloppenburg, the collegiate church Wildeshausen, the village Dötlingen, the monastery Hude as well as the city Oldenburg with the national museum for nature and man.
Since 2014, as an alternative to the Autoroute, there is the 380 km long cycle route of megalithic culture. The 208 km long Hünenweg was revised from 2015 to 2017. The three traffic routes each have their own road network.

The Visbek bride is another big stone grave in Wildeshausen 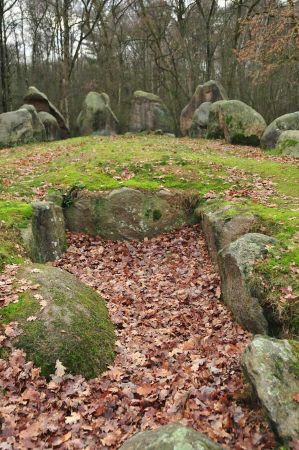 The approximately 80 m long and nine meters wide Visbek bride is located in the Holzhauser heath in the area of the rural community Wildeshausen near the junction Wildeshausen-West of the highway Bremen-Osnabrück. The access less chamber exists of ten supporting and four capstones, which is located in a roughly 80 m long and nine meter wide bed. 47 stones (three missing) are on one long side and 33 (17 missing) on the other. The short side in the southwest has two more than 2.5 m high curbs where there are missing three stones on the northeast side.
The facing stones of the Hünenbett are almost complete, but partially tilted. The plant is bounded on the southwest side, by four huge, up to 2.5 m high stones. However, it is not certain whether they are original stones of the edging or converted stones. There are no stones on the northeast side of the enclosure. Near the northwest side, there is the burial chamber, measuring only 5.5 x 1.5 m. The northwest-southeast oriented facility is associated with the summer solstice due to its sunrise orientation at midsummer. It is possible that the Visbek bride is a Stone Age moon observatory: the rows of stones indicate the setting azimuths of the moon in its declension extremes.

A folk legend about the Visbek Bride 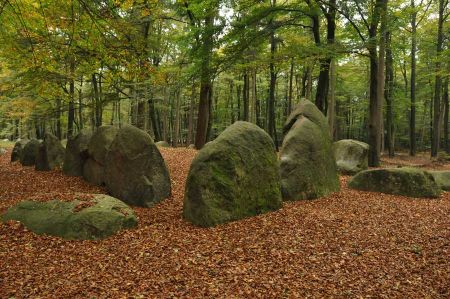 The plants Visbek Bride and Visbeker Groom got their name from an old legend, according to which a young woman was to be forced by her parents to marry a man from Visbek who was rich but did not love her. When she and her entourage were escorted to Visbek and saw the place in the distance, she wished that she would rather be turned to stone than to marry the man to whom she had been promised. By this wish it happened, and the bride and her entourage froze to stone, where they stand to this day. The same fate befell her bridegroom, which is just a few kilometers away from Visbek groom. In fact, even today, at the beginning of the 19th century, one cannot see one of the buildings in the center of Visbek from here.
The story was first written in the form of a poem in 26 verses titled "The Stone Bride from Wildeshausen". This authored the former in Wildeshausen and later in Hitzacker acting pastor J. G. T. Lamprecht who had the lines published in 1801. In this version, however, the word "Visbek" does not occur. The reference to Visbek happened by Carl Heinrich Nieberding by an introduction to the poem.