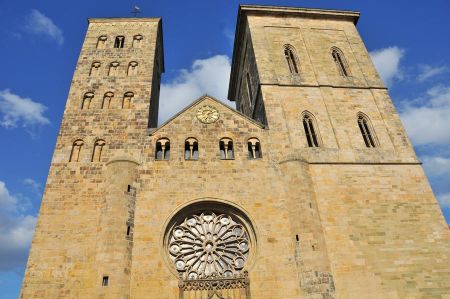 On our journey north, we had chosen accommodation in Osnabrück for the overnight stay, which firstly gave us the opportunity to take a short city tour and secondly to meet Lynn, the daughter of an Alaturka employee who lives in Osnabrück, and who immediately acted as our private city guide offered.

So we were able to take a first tour of the city of Osnabrück at 5:00 p.m. after checking into the hotel in the city center.

"Ossen" for oxen and "Bruges" for bridge 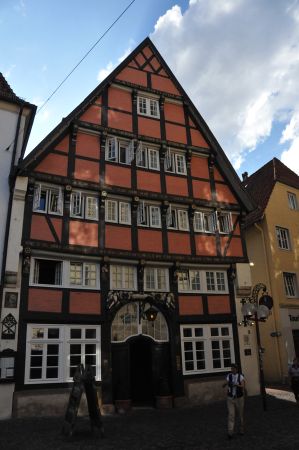 Since the Roman Empire "only" extended to Xanthen in the north, it was of course clear to us that the history of the sights here should be described as non-Roman, which, however, did not really diminish our level of curiosity. So we quickly got to the origin of the name Osnabrück and learned that a long-distance trade route crossed the Hase river right here, which was shallow enough at this point so that the oxen and oxen carts of the farmers could cross the river here at the ford without any problems. The name, according to one of the interpretations, came from the Low German words "Ossen" for ox and "Brügge" for bridge, which initially added together to Ossenbrügge. With the later construction of a real bridge, it then became Osnabrück in High German. If there is already an interpretation of the origin of the name, it usually does not take long before there is another story. This is also the case in Osnabrueck.

According to another interpretation, the name "Osna" is said to derive from the Germanic translation of the river name Hase, which was originally called Osna or Osen in relation to the Asen. So maybe just a bridge to the Aesir, i.e. “rabbit”, was meant. But maybe it was just meant a bridge over the river. 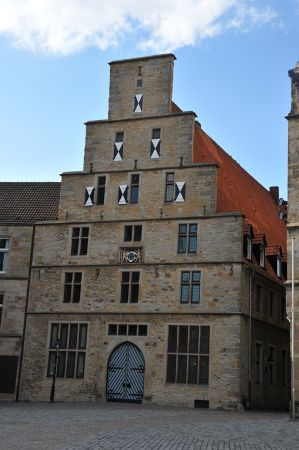 Anyway, we started our city tour at the Alte Fuhrhalterei, which caught our attention opposite our hotel with some theatrical figures displayed in the window. The historic building alone, in the form of a restored half-timbered house from the 16th/17th century, was worth looking at. We learned that this building had once been moved from the Kamp to the old town as part of renovation work, but that it was originally used to supply the horses for the carriages that came through. Today it contributes to the special atmosphere of Osnabrück's old town, in particular due to the puppet theater housed in it. As a rule, there are four performances per week, which are attended equally by children, young people and adults. The now well-known piece "Crisis with Luise" is currently running again.

In the meantime, the permanent location of a puppet theater alone is one of the special features of a city, because there are only a few permanent venues in Germany. Over the years, the Alte Fuhrhalterei location has also developed into a communication center for puppeteers who are also willing to make guest appearances. In addition to the normal season from September to May, there is always the possibility to book special performances, so that groups interested in special performances can also register. The management will be happy to send you game schedules on request. 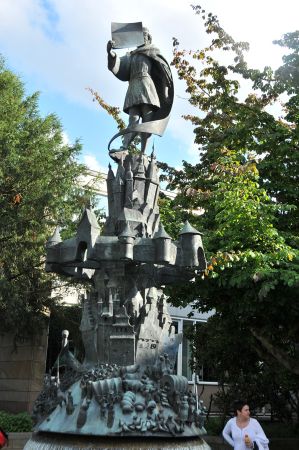 Our tour continues to the town hall, where a wedding party is gathering to receive the bride and groom. We don't want to bother any further because Lynn, probably inspired by the wedding guests, takes us to a bridge over the Hase, which bridal couples like to use for a custom that is very popular locally.

The newlyweds buy a padlock of any size and shape, have their initials engraved or painted on it, and then attach it to the grounds of the Hase Bridge as a lucky charm of marriage, throwing the key into the rabbit as a sign that the connection cannot be broken. In this way, a large number of locks of all types have accumulated on the bridge railing over the years. 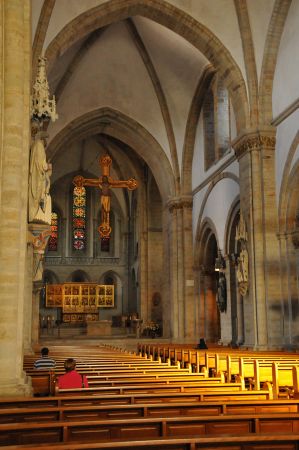 Under the government of Charlemagne, a regional market had developed around the bishopric founded in 780, which was later to become Osnabrück. The oldest city constitution found so far dates from 1348 and is called "Sate".

A little later, Lynn leads us to the Hexengasse, which is supposed to commemorate the witch hunts between 1561 and 1639 in Osnabrück. Right next to the cathedral, the small alley leads behind the sacred building where, especially during the reign of Mayor Hammacher (1565 - 1588), around 163 women were executed as alleged witches, most of them by burning. Later, under Mayor Pelster (1636-1639), another 40 women were burned at the stake as convicted witches. A total of 276 women and two men were executed under the pretext of sorcery during the witch hunts of those years. When the Protestant pastor of St. Marien Gerhard Grave turned against the witch hunts carried out by the predominantly Protestant city council, this resulted in his expulsion from the city.

The so-called Peace of Westphalia was negotiated in Osnabrück

In the years between 1643 and 1648, the so-called Peace of Westphalia was negotiated not only in Münster but also in Osnabrück, which finally ended the Thirty Years' War. Since Osnabrück was hardly damaged by the acts of war, the place for the peace negotiations offered itself.

In 1803, Osnabrück was occupied by French troops, and from 1806 Osnabrück briefly belonged to the Kingdom of Prussia. In 1807, the city went to the newly founded Kingdom of Westphalia, but on December 10th it went back to the French Empire, where Osnabrück became the seat of the Ober-Ems / Haut Ems department. On June 18, 1815, 400 soldiers from Osnabrück also took part in the Battle of Waterloo, so that a little later Gerhard Friedrich von Gülich opened the Waterloo Gate at Heger Tor with the inscription: "To the Osnabrück warriors who died at Waterloo on June 18, 1815 Courage shown” donated.

Everyone puts together their own ice cream creation

We end our city tour at an interesting ice cream parlor, which had prepared itself for a few special features: In addition to the selection of the sauces, which are first filled into the cone, the customer then selected the types of ice cream. Now the ice cream scoops were spread out on a mixing board and mixed with other ingredients such as chocolate beans, chocolate, mint, or whatever else was in stock in the store. The mixture was then formed into an ice cream mass again, with constant cooling, and filled into the prepared waffles. As a top, there was again a choice of sauce or fruit, which were available depending on the season. Various sprinkles were also available so that everyone could put together their own ice cream creation. An extremely interesting idea that requires some creativity itself. Brita and Gerda also created a new favorite ice cream in this way.

Flavors were given instead of numbers

In the evening we were in a bar where the drinks to be chosen by the guest were determined with the help of a dice. Instead of numbers, flavors were specified here, which were then picked up by the bartender and used to create an individual drink. You could even determine the alcohol content yourself. Also an interesting possibility of marketing, for us in this form absolutely new and so far unique.

So, as always, it pays off when a local takes the time to explain and show you local specialties. So the visit to Osnabrück will remain in good memory.