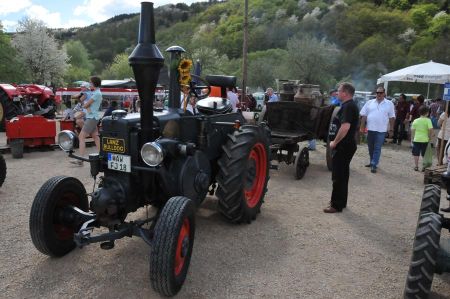 The journey through the Ahr valley via Altenahr in the direction of Adenau also gave us the opportunity to get to know the town of Hönningen. At first we noticed the many tractors while driving, some really old vehicles, which slowed down the very heavy leisure traffic on the weekend badly on the winding route.

Now, upon entering the town of Hönningen, it also became clear why so many tractors, some with trailers, were on the route: The "Ahrglühköpp" had their vintage car festival on the grounds around the Hönninger sports field, where you can meet with caravans directly on the banks of the Ahr from Friday to Sunday to camp and take part in the festival. So the decision to visit the tractor festival in Hönningen was made immediately, which we planned to do after visiting the Nordschleife.

From the name "Hönningen" it can be inferred that it must have originally been a Franconian settlement here on the Ahr, the earlier place name was probably Hunighofen. It is not clear exactly when the settlement was founded, but it is known from records that the butcher's abbey of St. Arnulf in Hönningen has been wealthy since the middle of the 7th century. It is also assumed that the dialect "Hünge" has its origin here. In 1084, the Abbey of St. Arnulf ceded its property in Hönningen to the monastery of St. Kunibert in Cologne. For this reason, Saint Kunibert is also the patron saint of the Hönningen parish. The "Liber valoris" names Hönningen in 1316 with the parish of Hönningen. In 1494, the rights in Hönningen went to the Johanniter command in Adenau, who had held estates in Hönningen since 1291. 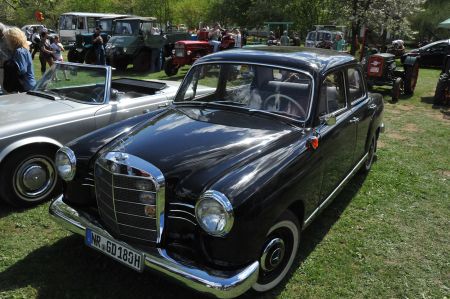 For more than 300 years, Hönningen, with its branches in Dümpelfeld, Niederadenau and Liers, belonged to the Order of St. John. We have already reported on the origin of the Order of St. John and its development, starting from Jerusalem as an aid organization for Christian pilgrims. Parts of the Catholic parish church of St. Kunibert date from the first half of the 13th century, such as the basement of the west tower and the lower parts of the choir. The chancel was increased in 1494 and altered in 1508; the two-aisled nave is dated 1524. The extension of the church was inaugurated in 1896. On the keystone of the church, next to the Cross of St. John, is the coat of arms of those from Orsbeck who, as lords of Wensburg, were also lords of Hönningen. Hönningen belonged to the county of Are until 1246; since that time to the electoral Cologne office Altenahr, in which it was a separate bailiwick.

The baker is baking bread in the old stone oven again 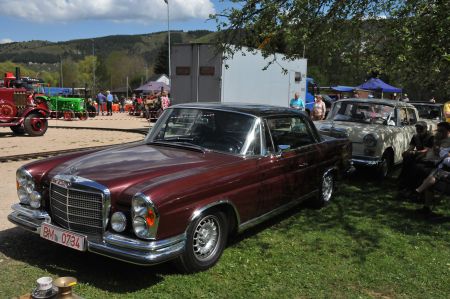 But now back to the “Ahrglühköppmonströsen” tractor festival, where agriculture and all kinds of vintage tractors are presented alongside a large spare parts market. Old trades such as blacksmith and wheelwright show their craftsmanship. The baker is baking bread in the old stone oven again. Next door, stationary engines drive grist mills and pin turners for flour production. A 7-ton steam engine tightens the transmission belts to the large threshing box, where already bound sheaves are threshed in late summer. And everywhere you can hear it chugging. A colorful array of vintage tractors are lined up for the parade. These include the well-known manufacturers who still produce tractors today, as well as those that have long since disappeared. There are rare Schlueter tractors next to John Dere, Porsche tractors next to Lanz Bulldog and Hanomag next to Fendt and Ford tractors. Interesting coaches can also be seen, in short a colourful picture of many types, from pure powerhouses with metal wheels to rather filigree drive motors for belt drives. 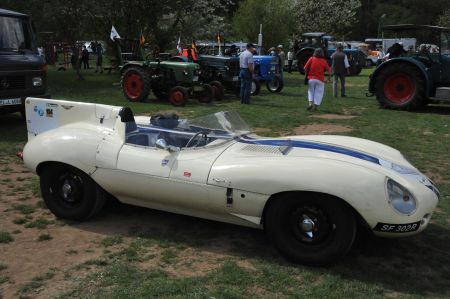 Also the friends of the vintage cars don't miss out, here an old Mercedes, there an old humpback Volvo, next to it some motorcycles and the vehicle of the racing legend Rudolf Caracciola. The classic car friends from Remagen, who took part in the tractor festival with their 30 classic cars, had already invited to an exciting skill tournament on Saturday. Even TÜV Rheinland took part in the festival by offering TÜV appointments for tractors. In this way, the much-loved and beautifully cared-for vehicle was also able to get the blessing of the TÜV test. 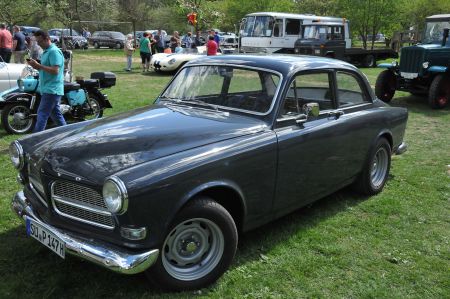 A large number of different demonstrations of old techniques rounded off the picture of the event before, at the end of the festival, this year's wine queen from the Ahr (Julia Migend) raffled off a tractor that had been approved by the TÜV and was ready for use.

Program of the "Ahrglühköpp" on Sunday:

Dernau, the wine paradise lures us to the Ahr river