Several times we had already visited Katrin and Jürgen in Dernau in the Ahr valley during our travels, before there was finally enough time to take a short trip along the Ahr in the direction of Adenau.

Directly after passing the Roman villa of Ahrweiler, we used the B 257 into the valley, where the river accompanied us sometimes to the right, sometimes to the left in long loops, completely natural, we could almost say.

The Ahr, a left tributary of the Rhine, has its source in Blankenheim in Euskirchen district, so at least the local traveler knows immediately that the Ahr should actually be viewed as a small river. From Blankenheim it goes eastwards to Adenau, which at the same time brings you to the southernmost point of the river. Then continue in the direction of Altenahr through the romantic part of the actually touristic Ahr valley to the district town of Bad Neuenahr-Ahrweiler and into the direction of Sinzig, where the Ahr finally flows into the Rhine. 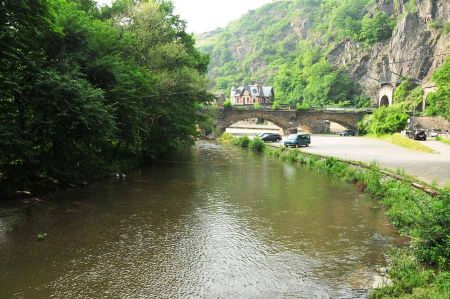 Shortly after leaving the Bad Neuenahr urban area, we drive clearly recognizable into the valley and immediately reach a picturesque rocky landscape that the river has cut around 300 meters deep into the Ahr mountains. High rocks on the right side of the road, which then quickly expand to the first vineyards facing south, but how steep, it is hard to believe that wine is growing here. This bottleneck in the Ahr Valley, here called Bunte Kuh, almost reaches the Ahr, so that there is hardly any space for the road, the rails of the Ahr Valley Railway are even built on top of the course of the river.

After a few loops we have already arrived in Dernau, probably the most famous touristic destination in the Ahr valley, but here too, as previously reported, there are traces of the Romans at the foot of the south-facing vineyards, who probably also appreciated the mild climate of the Ahr . The main settlement area was not far from the former winegrowers' association, from the cemetery to the upper village, for example, a Roman layer of fire and broken glass was found. Here too there was probably a location for a villa rustica, perhaps comparable to the one in Ahrweiler. A little later we reach the village of Rech on the south bank of the Ahr right at the foot of the Steinerberg, one of the highest peaks in the entire Ahr Mountains. First mentioned in a document in the Middle Ages, we were particularly interested in the oldest stone bridge still standing over the Ahr, which even survived the great flood of 1910, the Nepumuk Bridge. Also of interest is the old winegrower's house, which is the oldest half-timbered house in the village from the 17th century.

After leaving the village of Rech, we go again along idyllic campsites to the village of Mayschoss, where we parked the vehicle at the entrance to the village to take a look at the ruins of the Saffenburg castle. The medieval Romanesque Saffenburg once stood on the elongated rocky massif, about 260 meters long and 80 meters wide, the location of which was washed by the Ahr on three sides. Once consisting of two outer castles and a core castle, which were separated from one another by deep trenches, remnants of the foundation walls have been renovated since 2004. After a construction period of at least three years, the castle ruins were opened to the public again in 2007. Next to Altenahr we come across the largest loop of the Ahr, which is under nature protection due to its diverse flora and fauna. The so-called red wine hiking trail, which meanders through the vineyards from Altenahr to Bad Neuenahr, is absolutely worth mentioning and is popular with hikers. We decide to do at least a few parts on our next stay.

Of course, many tourists are drawn to the wine festivals in the individual wine towns, which is clearly demonstrated by the number of overnight stays. In our opinion, of course, wine festivals or anything related to viticulture are extremely interesting, but not the sole reasons to visit the Ahr Valley. Hiking trails that are largely in harmony with nature, interesting sights and cultural events all contribute to the attractiveness of the region. Not to be left unmentioned is the Vulkaneifel, a little further south, which has become so famous for its mineral water.