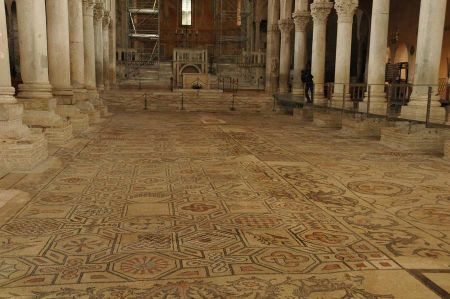 Our project trip should also take us to the ancient Roman city of Aquileia in what is now the province of Udine, where there is a huge excavation site to visit as well as two museums, one of which is on early Christian history.

The planned days of stay in Aquileia were, however, intended both to visit the Roman sites and to explore the immediate surroundings with the "Foce dell`Isonzo" nature park, as Aquileia is expanding the regional cycle path network thanks to EU funding and is also connected to Austria and Germany via a cycle path is. A good example of the linking of cultural heritage with implemented outdoor activities, which we wanted to include as a successful example in our project.

The ancient city of Aquileia was a port city on the once mighty Natissa River (Natisone-Torre) in what is now Friuli in northern Italy, not far from the border with Slovenia. After the attempt at a Celtic settlement had been stopped, founded in 181 BC. About 3,000 veterans of the Roman army based on a senate resolution a military colony according to Latin law, "in agro gallorum" as a military bridgehead for the Roman conquest of the Danube region. The continuously increasing importance of the city resulted from its function as an important traffic junction, which later led to the award of the title "Municipium". Today Aquileia is a small town with just 3,400 inhabitants, the formerly mighty river is now just a small river due to silting up and changing the course of the river.

For travelers and traders in antiquity, Aquileia was the first major city in Italy after crossing the gate of Postojna from the southeast or crossing the pass of the Birnbaumer forest in the Julian Alps. This is also the end point of the famous Amber Road coming from the north: The Roman writer Pliny the Elder reported in his notes that amber was transported from the Baltic Sea to Aquileia. The city was also on the way to the province of Noricum, which was of great importance for the Roman Empire due to mining. 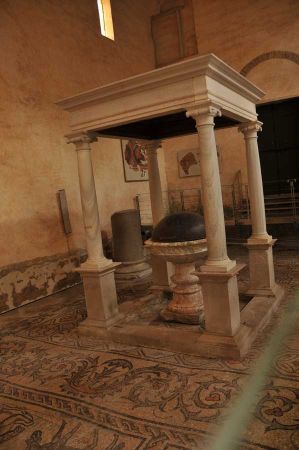 Aquileia owed its development to an important ancient trading metropolis to these circumstances. In addition to amber, Aquileia was also known for iron smelting and the production of amphorae, which are so important for sea transport, flourished. Shipyards were built at the river port of Aquileias, whose ruins of the quays and warehouses are excavated and can be viewed. A number of ship accessories for transport by sea were made in Aquileia, as evidence from the excavations shows. Famous visitors to the ancient city included B. Julius Caesar, Augustus, King Herod, Marcus Aurelius and Constantine the Great. Around 90 BC Julius Caesar spoke in "De bello gallico" about Aquileia, which was the location of the winter camp. With the administrative reform of Augustus (around 27 BC to 14 AD) Aquileia became the capital of the tenth region "Venetia et Histria".

Due to its central location, the city also long formed a bulwark against the "barbarians" from the north and east, who were attacking again and again, as the enemies of Rome were often described. Emperor Mark Aurel had his headquarters here in Aquileia in 168 at the beginning of the Marcomann Wars. During the First Marcomann War, Aquileia was besieged in 170 by the Marcomanni and Quadas who had invaded northern Italy.

At the beginning of the imperial crisis of the 3rd century, in 238, the city of Aquileia sided with the Senate in the fight against the then reigning Emperor Maximinus Thrax. He moved against Italy, but was killed by his own troops during the siege of Aquileia. In 270, Emperor Quintillus moved to Aquileia to use it as a headquarters for his armed forces after the usurper Aurelian claimed the dignity of emperor for himself. However, the troops of Quintillus defected to Aurelian, which is why the emperor committed suicide or, as other sources claim, was also murdered by his own soldiers. 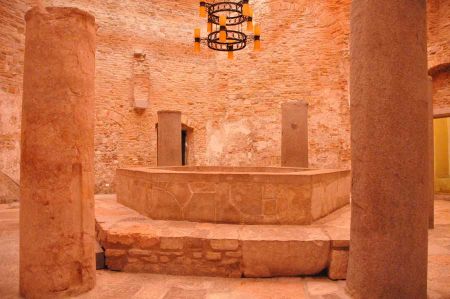 Aquileia experienced a new spiritual bloom from 314 onwards through Christianity, especially through its bishop Theodorus. The early history museum for the development of Christianity near the partially restored forum in the open museum area is worth visiting. Between the forum and the information building of the local tourism authority, on the right-hand side (next to the main road) is the section of the Roman road that crosses the city, which has been exposed at around 80 meters. This section of the Roman road once connected Aquileia with the Po Valley and thus with all of Central Europe. In September 381 the Synod of Aquileia took place, which was directed against Arianism. With regard to our visit to Stobi and Nicaea, we had already referred to the subject discussed at the time.

In 452 the city was destroyed by the Huns under their leader Attila. 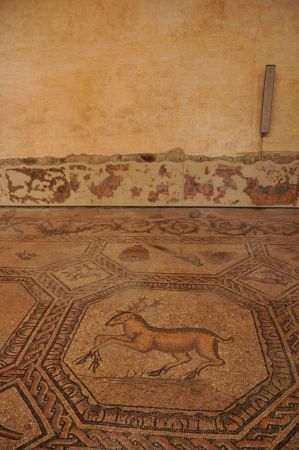 Since the year 572, the Bishop of Aquileia was considered a patriarch and thus the highest church prince in the Latin Church, just after the Roman Pope. After the population fled to the lagoon island of Grado, the patriarchate was also moved there. Later there were two competing patriarchs, in Aquileia and in Grado.

Under the Lombards, Aquileia lost its role as a political and military center with the establishment of the Duchy of Cividale. Instead of Aquileia with its swampy and unsafe location in a sand-washed harbor during the migration of peoples, Grado, located on the nearby lagoon island, was preferred. With the rise of Venice, Aquileia finally lost its dominance.

The Gospel was preached from Aquileia in the Alpine region, so the first Christians came from Aquileia in Säben. Carinthia, south of the Drau, was pastoral care and canonical administered by the shepherd Aquileias from the Carolingian period until the abolition of the patriarchate. The place name Hermagor in Carinthia goes back to the first bishop Aquileias. 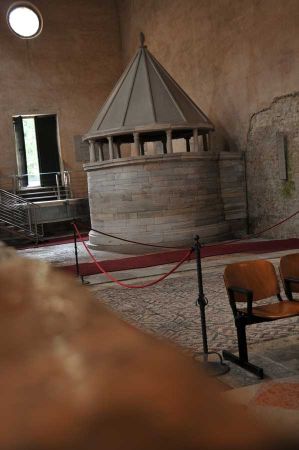 The National Archaeological Museum Aquileia (Museo Archeologico Nazionale di Aquileia), located directly on the main road, is considered one of the most important archaeological collections in Northern Italy. The museum, which opened in 1882, is located in the vicinity of the archaeological excavations of Aquileia and is housed in the Villa Cassis Faraone, which was built between 1812 and 1825. Its holdings of Roman stone monuments and mosaics are of particular importance. Most of the exhibits come from the archaeological excavations of Aquileia and date from the 2nd century BC. BC to the 5th century AD

On the ground floor of the villa there is a collection of stone monuments, with statues, busts, inscriptions and reliefs. On the first and second floors of the villa, jewelry and various Roman-ancient art objects made of glass, amber, bronze, gold, ceramics and engraved stone are exhibited, which document everyday life in ancient Aquileia.

The lapidarium is located in the garden of Villa Cassis. The stone gallery consists of mosaics, urns, tombstones and architectural ornaments. Some of the mosaics were set into the floors. Some of the architectural elements, which mainly come from public buildings in the forum, from tombs and inscriptions, are arranged in chronological order. 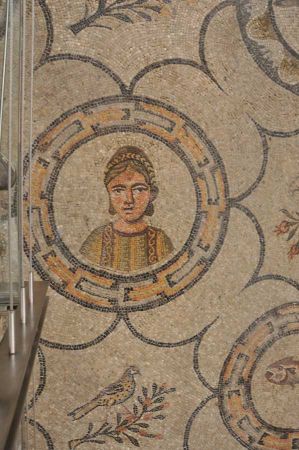 The absolute highlight and most fascinating part of our visit to Aquileia was without a doubt the basilica and the bell tower. The basilica, located in the historic Piazza Capitolo, impresses with the mighty bell tower 73 meters high, which, according to historical records, was built as a watchtower. During the construction phase around the year 1000, the stone material from the Roman amphitheater was simply used. When it's not raining, the tower is also open to visitors. On a clear day you can see as far as the Alps. Together with the connecting building "Church of the Heiden" and the baptistery, it offers a sublime sight, underlined by the visible masonry of Romanesque-Gothic influence from the construction phases of the Patriarchs Poppo (1019-1042) and Marquard (1365-1381).

The basilica houses one of the most extraordinary multicolored floor mosaics of the 4th century in our world. This huge mosaic area was brought to light in the years 1909-1912. Of the two mighty halls attributed to Bishop Teodoro, one is said to have been used as a church and the other as a room for the religious instruction of the baptized. Further adjoining rooms completed and connected the two halls.

The attentive observation of the symbols of animals, plants, people, shapes and braids shown here, which are sometimes difficult to interpret and perhaps not all Christian, served as an incentive for those who chose a new faith as an adult and should reinforce their decision . The frescoes in the apse, which have almost been preserved in the original, should also be viewed carefully.

Today it is believed that Aquileia had 70,000-100,000 inhabitants at the end of the imperial era: it was the fourth largest Roman city in Italy and the ninth largest in the entire Roman Empire. Christianity came early to Aquileia, which then became the center of the spread of the new faith.

In addition to all the history, there is a really interesting environment that makes a longer stay very pleasant.