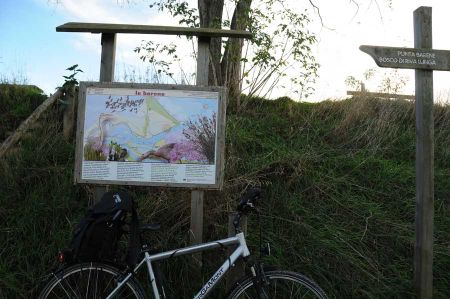 After our days in Venice and on Lake Garda, the next stop for several days was the ancient Roman city of Aquileia and its surroundings in the Italian province of Udine as a starting point.

In addition to visiting the archaeological sites of Aquileia and Grado, we had planned yet another, interesting visit or better activity program in our project, we had noticed an interesting outdoor activity below the term "Ciclovia Alpe Adria bike path" during Internet search a few times. After all, we are always on the lookout for attractive outdoor opportunities that can be implemented in other regions of Southeastern Europe without immense financial expenditures, involving the ancient, culturally interesting cities and towns and thus creating gentle tourism. 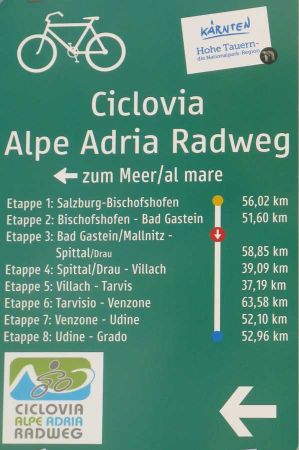 The networking of bike paths that incorporate culturally significant places is of course nothing new. In many countries, the bicycle networks have long been established and are used by thousands of cyclists, sometimes several times a year. Our conversations in Stobi / Macedonia, which we were able to conduct with the local archaeologists, have made it clear to us that even a well thought out and implemented excavation, a scientifically founded restoration of ancient cultural heritage and the subsequent opening up are far from being available to interested tourists placement of soft tourism in terms of employment does not automatically lead to earning a living for the locals in the environment. When even the archaeologist themselves are blamed for a lack of tourism, something went wrong.

According to our experience, it is absolutely necessary today, when it comes to the preservation and safeguarding of cultural assets, which can at least be promoted by soft tourism, that always an attractive offer for the cultural traveler must be offered next to the highlight to extend the stay on cultural property.  Thus, in Stobi, except for, one may forgive the expression, an imposing excavation site with excellently restored cathedrals, stadiums and mosaics, which can motivate the cultural tourists to stay. Maybe a furnished parking space for caravans and mobile homes, first-established cycling and hiking trails and a little infrastructure could be a first step. Whereby natural paths can be the origin, how often have we followed corresponding goat paths ourselves. If then the connection to a cycling or hiking network such as succeeding along the Via Egnatia, another step has been taken. At least now, the local population can also benefit by offering accommodation, local products or services. To explore the implementation of these starting points, to find good examples, to explore and to disseminate, is one of our project tasks. 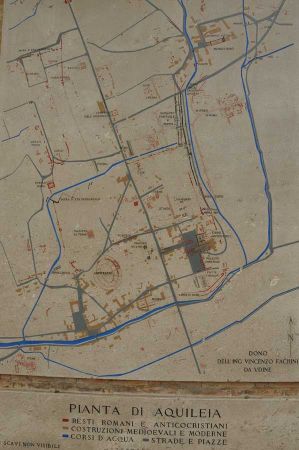 What still applies to Stobi, once was same for Aquileia and other culturally significant cities along the ancient Roman road Alpe Adria, which once connected the north of Europe with the Mediterranean. To use this existing network, albeit interrupted again and again, was the basic idea of ​​a cycle path system, which was to implement a cross-border connection of the developing cycle path networks of the Adriatic with those in Central Europe.

At the beginning, behind the Italian-Austrian project "Ciclovia Alpe Adria Cycle Path", was the common wish of the three participating countries Friuli Venezia Giulia, Carinthia and the Province of Salzburg: a cross-border cycle path that transcends the Alps and connects the Central European cycle path network directly with the Adriatic.

In 2008, the project entered the preparatory phase, in which the route Salzburg-Villach-Udine-Aquileia / Grado was established. The advantage of this route was to be passable in a relatively short time, because even some longer sections of cycle paths were present already or under construction and for the remaining sections of low-traffic side roads were available.

The huge project, costing a total of 1.2 million euros, won as the winner of the call for proposals under the European cross-border cooperation program Interreg IV Italy-Austria 2007-2013. The strength of the project lies in the cooperation between the project partners in the realization of the infrastructural work (biking path network) and the joint marketing measures. 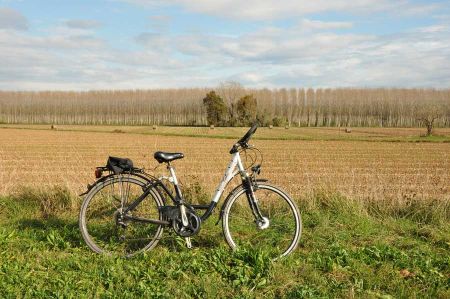 The infrastructural work has already been completed: thanks to the co-financing of the European Union, three important parts of the Alpe Adria Cycle Path have been realized:

A first cross-border event has already taken place: in June 2010, the Arnoldstein - Thörl Maglern stage was opened in the presence of the two state captains of Carinthia and Friuli Venezia Giulia. They were accompanied on the route from Villach via Arnoldstein and Coccau to Tarvis by hundreds of cyclists from Austria, Italy and Slovenia. Another opening took place in spring 2014 in Friuli Venezia Giulia. 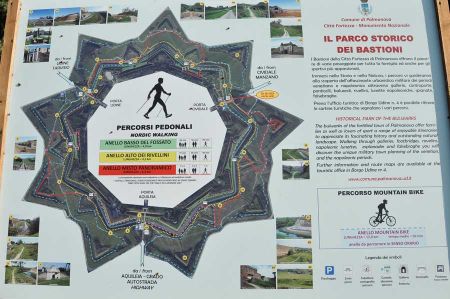 The project "Ciclovia Alpe Adria Cycle Route (CAAR)" is a good practice example of EU-funded collaborations that are not only aimed at improving cross-border connections and the development of border regions. It is also essential to increase sustainable mobility as a concrete measure in view of the European Union's commitment to reduce greenhouse gas emissions by 20% until 2020.

The already mentioned section Cervignano to Grado in Friuli Venezia Giulia, we have then also covered itself, while our thoughts by keywords and pictures fixed, notes and ideas noted, but largely omitted sightseeing during the first tour, which we later in individual reports, however, still will deliver.

Our "entry point" into the Ciclovia Alpe Adria bike path was the small town of Cervignano del Friuli, located about halfway between Palmanova and Aquileia, about 19 kilometers along the main road 352 to Grado. As a starting point, we had parked the caravan in the square of the Camper Club "La Foce Dell Ísonzo" in Staranzano (we will present the place separately, as it can be a good example of the overall facility). Just the way up to the bike route, was partly problematic, since no separate bike paths were available. This was particularly true for the bridge crossing the Isonzo, where simply the daily traffic was too strong. It should be noted at this point, however, that more camping or parking is also near the Ciclovia Alpe Adria bike path or planning to expand the bike path system until Staranzano. 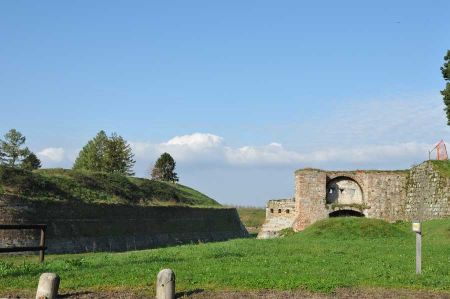 The bike path is, from Cervignano, completely new paved, which makes the cycling through the anyway flat terrain very easy. Without paying much attention to it, we passed the approximately 115 meters long Forum of Aquileia with its reconstructed rows of columns. It also went by passing the tent of the tourism organization, which had thankfully provided us with plans of the cycle path network. A little later we arrived on the narrow communication dam between Aquileia and Grado. Large number of islands on the right bank of the dam aroused our interest, as did the modern part of the town of Grado, which can undoubtedly be described as the El Dorado for watercraft.

From here you continue along the dam on the seafront, until you reach a huge nature reserve that joins the mouth of the Isonzo River and parallel to its course. A huge area that offers countless bird species protection and survival. Birdwatchers from many countries come here for the birds watch. Now, in November, due to the heavy rains, the river had overflowed its banks in many areas, so that the actual run was barely recognizable. 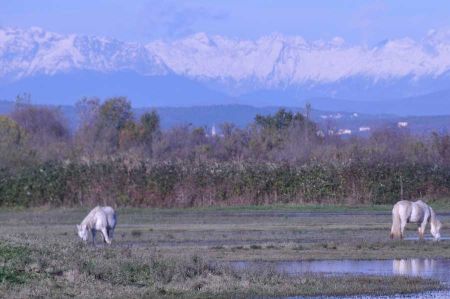 The bikes can also be safely turned off here and you continue on foot to the estuary. At the edge of the lagoon, we also met a small fishing village, which would almost have been classified as medieval, if you take away the outboard motors in use from your mind.

For us it was a very interesting experience to drive on this part of the bike path, as it shows once again how much the ancient sites or interesting districts can benefit. Relaxed you can plan on the daily routes, so that for the sightseeing on the way enough time remains. We will also explore the path towards Udine, which passes through the artificial military town of Palmanova.