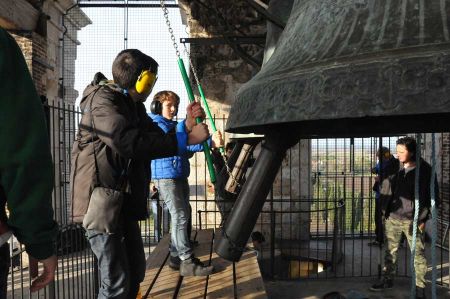 Actually, it was just plain coincidence that brought us into contact with an event that we had not experienced in this form before.

We went back to Aquileia by bike to see the mosaics in the cathedral and for sure, the museum itself on this weekend, if suitable, to climb the mighty bell tower of at least 73 meters, which unfortunately was closed on our last visit due to the rain because of the existing danger of slipping.

And we were lucky. At the cathedral we heard voices from high up the tower, so it should be open. We first turned to the tower, climbed the really tiring steps of the spiral staircase after we had extensively considered and photographed the massive foundations as well as the Roman mosaic located in the bell tower. On the way we had forgotten to count how many steps there were on the way to the tower platform, just, it was really exhausting. Arriving at the belfry, the name of the room of the suspended bells is parlor, despite the large openings in all four directions. Here several young people gathered, including, however, some gentlemen in the set age, all seemed somehow very busy. To make it short, no one did take any notice of us at first.

Youthful voices lure up to the bell tower 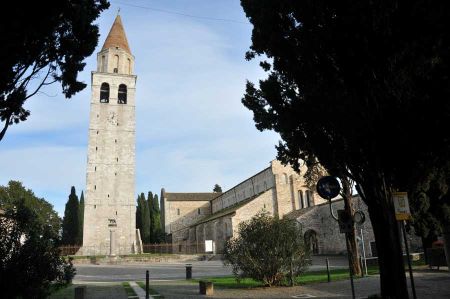 The space was so large that a cover of the opening surfaces with blinds was probably not necessary. These shutters are otherwise often found on church towers, so on the one hand, the bells and the ringing machine are protected from the weather and on the other hand the sound of the bells in the belfry are collected and can be specifically directed into the distance. At first we were too much absorbed with the view from the tower, which in clear weather should reach as far as to the Alps.

Then we turned to the three mighty bells, which could be rung both manually and mechanically. Incidentally, the first known motor-driven chime was found in 1898 in the Georgen Church (center of Berlin). Around 1908, the common driving of the bells was replaced by individual drives, and derailleurs were also added that ring the bell individual bells or bell groups enabled. Lot of bell strokes are generated with a so-called "hitting", in which the bell is struck with a hammer. Accordingly, rigidly hung bells, which are struck by a hammer from the outside of the percussion ring, are called sound bells and often have been poured into a "shortened" rib. Such bells are often used just to show the time or find their use in chimes. A special ringing is bubbling. Here only the ringing bells are struck rhythmically, dynamically and melodically differently.

Bells are now operated with choppers 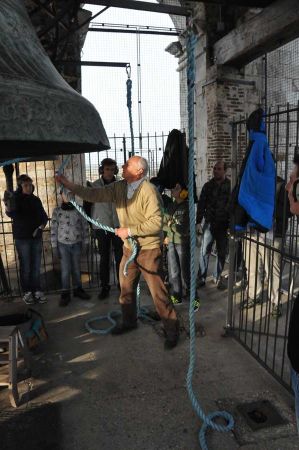 Today, most bells are rung by motor. The machine works as the drive of the bell. An electric motor with electronic or electromechanical control brings the bell to vibrate via a chain or belt drive and the cable wheel attached to the bell yoke. In the area of ​​the rest position of the bell, the motor is turned on alternately in one or the other direction of rotation briefly, whereby the bell gradually moving up to the desired angle. Recently, linear motors have been used for the bell drive.

Of course, almost every belfry has the opportunity to ring the bells by hand. As a rule, a bell is then rung via a rope wheel or rope lever attached to the yoke.

As a brief, further introduction to the carillon, the following words shall apply, which one of the said older gentlemen then gave some explanation of the project of the young people a little later. Slowly it became clear what was the idea of this program at lunchtime: carillon in the church tower.

The following explanation was given by Francesco: bell and clapper form a double pendulum. The ringing therefore must be set up for the correct stop of the bobbin.

Symmetry between clapper and bell is important 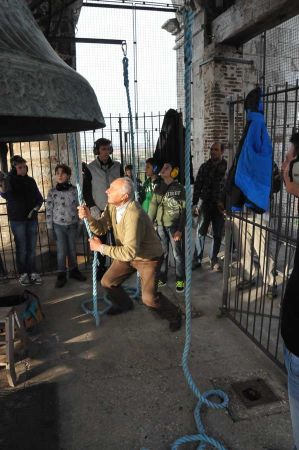 This is critical for the following reason: The later the clapper encounters after the reversal of the bell at the striking ring (thickest point of the bell), the more energy it takes. If this is more than the energy loss on impact, then the clapper moves faster to the other side and takes up less energy there again. For this feedback to work, the natural (bumpless) pendulum frequency of the clapper must be slightly less than that of the bell, so that the phase of the bell vibration drives that of the clapper in front of it. If the frequencies are too different, then at the beginning the clapper takes too little energy out of the swinging of the bell, so that it has to vibrate violently in order to do a first strike at all. If the difference frequency is too small, the clapper oscillates in phase with the bell and the bell remains silent.

At first it sounded rather complicated, but soon after we were able to convince ourselves of the uniformity in the exercises of the young people. The bells were set in motion with long ropes attached to free arms above the bell. The bell moved faster and faster, with the clapper hanging almost vertically until finally there was so much momentum in the bell that the clapper was hit and now also vibrated. At the same time the first stroke of the bell was heard. It should be noted briefly that each of those present were wearing hearing protection and they had supplied us with it too. 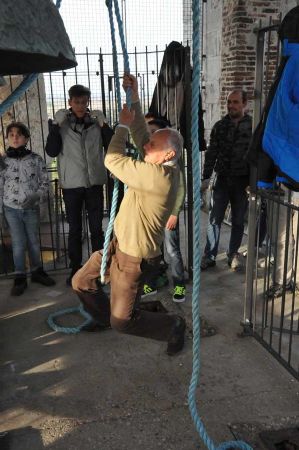 Now another explanation of Francesco followed: The frequency of the attacks (measured in stops per minute) depends on the mass of the bell and the yoke, whose center of gravity, whose distance from the bearing axis and the ringing angle is dependent. Consequently, damage to bell towers is often caused by resonances that result from the proximity of the ringing frequency of a bell to the natural frequency of the tower and that can lead to tower fluctuations of several millimeters. Often in such cases, the yoke is provided with additional weight (one speaks of a "heavy" yoke) to slow the bell.

There were so many new insights that we were then allowed to experience transformed into practice, so that resulted in a lesson for us in the carillon of real church bells. And indeed, the boys and girls were constantly instructed as us, what to do. It was visibly pleasing to everyone, in spite of one or the other misunderstanding, which inevitably happened through constant changes to the pull rope of each individual bell. It also has to be really exhausting to maintain the right momentum, as the beads of sweat proved in November. 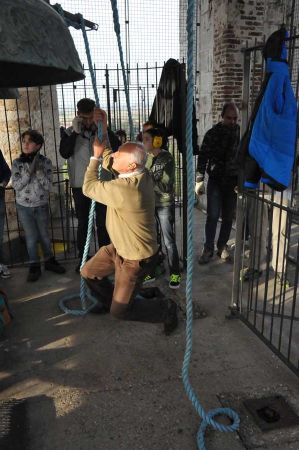 Then the scene changed, because now the clappers were fixed at a small distance to the bell. Even the "waitresses changed" and now it was the very young bell ringer who used the ropes with which the clapper was fixed in order to let the bells ring like a percussion by pulling them very close to real carillon, so many different melodies were played, which had been practiced with a lot of training. Also, there was a steady "change of personnel".

Then the bigger ones got active, again and again the ropes to move the bells tensed. So there was an almost one-hour concert of the huge bells, which could probably be heard far into the country. Despite hearing protection, the actions of the elderly were certainly heard many kilometers away. Whether the Saturday carillon is popular with everyone, we unfortunately could not find out. The youth work, which can certainly be considered as a recommendation in other countries, is astounding.