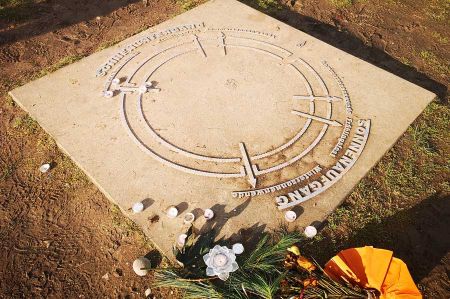 We had already been told several times about the circular moat not far from Goseck Castle, now the ancient building, better known as the “solar observatory”, should be hiked.

Since the weather was also right, we set off in the early morning with some provisions, whereby our way should also lead to the castle and the Saale. We will report on the hike itself in another article. 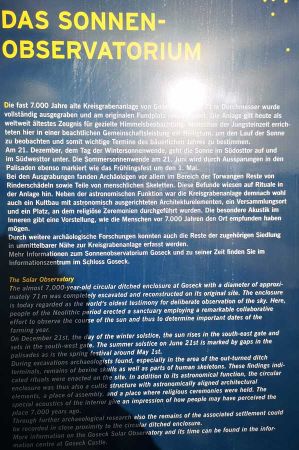 The district moat of Goseck is a Neolithic circular moat on the north-western outskirts of Goseck in Saxony-Anhalt. During a reconnaissance flight in 1991, the ring-shaped soil discoloration was discovered by the aerial archaeologist Otto Braasch and reported as a new soil monument. The facility was completely excavated between 2002 and 2004 as part of an interdisciplinary research project. The complex, which was built during the Middle Neolithic around 6,900 years ago, is assigned to the culture of stitch band ceramics. The Goseck circular moat has been described by some archaeologists as the world's oldest known solar observatory.
Together with the place where the Nebra Sky Disc was found, the Langeneichstädt large stone grave, the Pommelte district ditch and the State Museum for Prehistory in Halle, it is a stop on the tourist route “Himmelswege”.
After the discovery in 1991, aerial photographs of the area were taken again from 1999 and geomagnetic investigations were carried out, which enabled a complete mapping of the ground plan.

Exposure of the solar observatory as an interdisciplinary research object 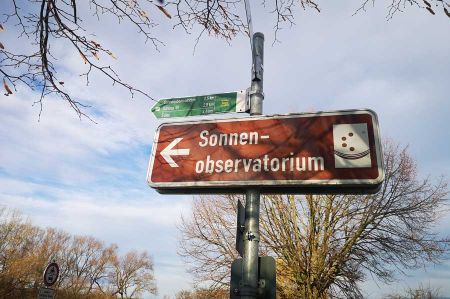 Under the direction of François Bertemes from the Institute for Prehistoric Archeology at the Martin Luther University Halle-Wittenberg, the south-east gate and part of the outer ring, which consisted of a moat, a wall and two palisades, were first uncovered in 2002. During the first excavation on an area of 10 m × 50 m, in addition to the traces of the ring system with fragments of the stitched ceramics, those of a long house with plastered wattle walls and a children's grave with two vessels from the time of the previous linear ceramics were found.
In 2003 a large part of the first excavation area was examined again and an area of 30 m × 40 m to the south of it was examined for the first time and the entire south-east gate was uncovered. It was found that the inner palisade gate was narrower than the outer one and that it was narrower than the access route over the moat.
In subsequent excavations, numerous cattle bones, especially skulls, and human bones in three pits in the earth were found. They had been carefully worked, the flesh scraped off the bones. That could speak for human sacrifice - or for special funeral rituals.
From June to October 2005, the facility was reconstructed on the now completely exposed area. The opening took place on December 21, 2005, the day of the winter solstice.

The tour between the outer and inner palisade ring 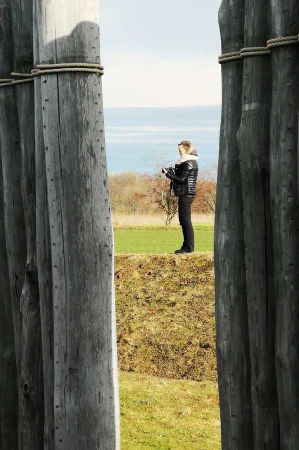 The circular moat is located on a plateau above the Saale valley and consists of a clearly recognizable, approximately circular moat with a diameter of around 71 m. There was even evidence of a flat earth wall around the moat. The facility has three trench-lined access routes that face north, south-west and south-east. Inside there are traces of two concentric palisades (about 56 and 49 m in diameter) with equally oriented gates that narrow towards the center. No further buildings could be found on the inner surface.
According to studies by the astroarchaeologist Wolfhard Schlosser from the Astronomical Institute of the Ruhr-Universität Bochum, who previously interpreted the Nebra Sky Disc, the two southern gates and access routes (seen from the center of the facility) are accurate to within three to four days Sunrise and sunset at the winter solstice around 4800 BC Aligned. The northern gate points almost exactly to the astronomical meridian, namely to the north. It is therefore likely that it is an observatory to determine the winter solstice.

Further details of the palisade connection 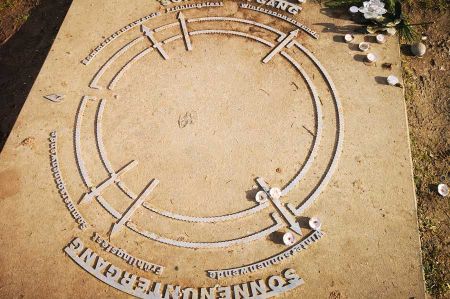 In 2004 another sighting device was found in the palisade, which also made it possible to determine the summer solstice. Wolfhard Schlosser's evaluations were supported by a GPS satellite-based measuring system. In contrast to other poorly preserved Middle Neolithic circular moats, the sight lines in Goseck are extremely precise and allow the calculation and observation of the solstices over several days in all four points.
After evaluating 40 radiocarbon dates, the construction of the plant will be in the 49th century BC. Dated. Due to the data and the typology of the stiched ceramic finds, it can also be considered likely that the complex dates back to the 47th century BC. Was in use.
Another Neolithic settlement has been discovered about a kilometer from this complex. An exploration group from the University of Halle came across the remains of a 7,000-year-old village of linear ceramics in the village of Goseck while digging a 50-meter-long and one-meter-deep search trench.
Documentation and evaluation of the excavations have been part of a joint project to explore the microregion around Goseck since 2002, which is carried out by the Halle institutes in collaboration with the University of California at Berkeley.

Opening of the system on the southwest side 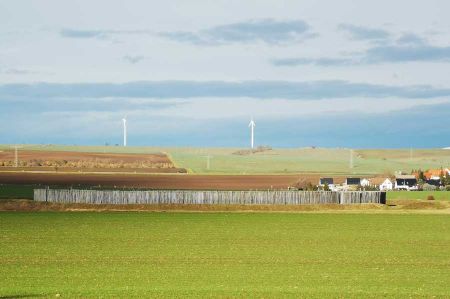 In Central Germany, several circular moats from the Middle Neolithic relate to the sunrises and sunsets of the summer (Schalkenburg bei Quenstedt, Quedlinburg: north-west gate) or winter solstice (Goseck: south-east gate). References between the Middle Neolithic rondels and solstice points have already been established since the 1980s in a number of other systems of stitching ceramics or the East Central European Lengyel culture (e.g. Těšetice-Kyjovice in Moravia, Künzing-Unterstberg in Bavaria or Svodín, Slovakia).
The circular ditch phenomenon came to Central Germany downstream from the area of the western Lengyel culture. All previously dated circular moats were erected in a very short period of time in the early stage of the Lengyel culture or "Culture with Moravian Painted Ceramics" (IA) and at the beginning of stage IV (= stage II according to Dieter Kaufmann) of stitched ceramics. A stylization of Goseck in the press as the “oldest observatory in the world” is therefore not entirely correct. As a wooden henge monument, the Goseck complex is around 2000 years older than Stonehenge.