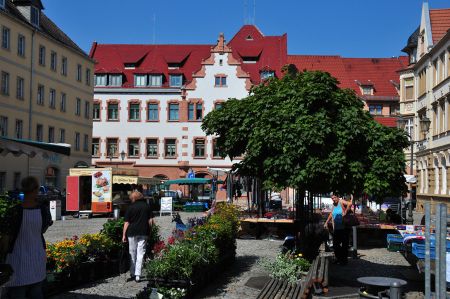 Large parts of the historical city center were destroyed by American air raids at the end of the Second World War, especially from February to April 1945, later the city fell victim to the socialist reconstruction plans, so that - especially around the new Eichplatz - very few historic buildings are to be found in the city center.

Plans for the constructions on the square, a project that is controversial discussed among the population, is being prepared. The center has already been supplemented with partial, larger building complexes in recent decades. The architecture in the city center thus developed in different construction periods and styles and is modern and partly also industrially shaped compared to other cities in Thuringia.

To the north of the city center is the Thuringian University and National Library (ThULB), rebuilt in 2001. The building contains nearly all libraries of the Friedrich Schiller University as well as a large restoration and digitization workshop. West of the ThULB, north of the city center, is the Botanical Garden and just north of the Zeiss Planetarium, planned by famous Jena architects Schreiter and Schlag, the oldest preserved planetarium building in the world, opened on 18 July 1926, can be visited. To the north-west of the planetarium lies the Griesbach Garden House, also known as the Princess's Castle, with a large garden, which is followed by the cafeteria philosopher's path built by the architect Ernst Neufert (probably every architectural student knows his main work "Neufert Bauentwurfslehre").

Within the city center, the Collegium Jenense, one of the oldest university buildings and founding place of the university, was set up in a former monastery. The north-east of the old town center is the main university building built in 1905-1908. In its place once stood the old Jenaer city castle. Just the old castle fountain in the courtyard reminds of the castle. In the years 2000/2003, the second-most accouching house in Jenergasse 8 / Ecke Fürstengraben, a timber-framed house built in 1556, was renovated, which had been turned into an "educational institution for obstetrics" by the medical doctor Justus Christian Loder. From this period, a rare written source (Edited by Stadtherr Wolter): the desperate letter of a single pregnant woman, who was to make herself available in this house to the interest of the physicians.

Since the Middle Ages, the town center of Jena has been densely populated up to the market square. In October 1806, a row of houses burned down in the north-west of the old town during the battle of Jena. It was given the name Eichplatz because of an oak planted in 1816 in its middle by students of the Urburschenschaft, a traditional unity of students. It was removed in 1947 and placed in front of the main university building in 1951. In the years 1968/69, the GDR map removed the four-sided square set of the calibration station along with the Burschenschaftseiche by blasting and planning. Only its north side along Johannisstrasse was preserved. Thus, according to an idea, Hermann Henselmann's space for the construction of a research center of the company VEB Carl Zeiss Jena arose in the form of a huge telescope, which, since 1972, was placed on the site of the historic Eichplatz, the Jentower.

To the east of the tower, there was a wide, undeveloped and partly designed area descending from the Holzmarkt along Löbderstrasse across the north-western side of market square to the Johannisstrasse, serving as a parking lot. It was in 1947 by the rigorous clearing up of the middle part of the old town, which had been severely destroyed during the Second World War by bombings. In 1970, the open space was transformed into a parking area surrounded by parking spaces and horticultural facilities (the construction law of the German Democratic Republic required a central marshalling area). The whole was called "Zentraler Platz", but from 1979 onwards, it was called the cosmonauts' place.

There are also the tower remains of the old city wall. These include the red tower at the southeast end, which had been collapsed in 1995 (but now rebuilt), the anatomy tower where Johann Wolfgang von Goethe discovered the interdental bone with Justus Christian Loder, at the south-west end and the Johannistor at the western end of the historic city core. From Johannistor, a short section of the wall, on which the so-called house stands on the wall, runs to the former Pulverturm in the north-west of the town center.

In the west of the city two houses of the Bauhaus architect Walter Gropius were preserved, the house Zuckerkandl (1927-1929) and the house Auerbach (1924). Both houses were renovated after 1990 and are privately owned. Particularly noteworthy is the only original Bauhaus kitchen in Haus Zuckerkandl.

A memorial for Ernst Abbe in the form of a temple with a roof construction in Jugendstil was built between the Goethe Gallery, the Volkshaus and the old hospital building at Bachstraße. The architect of the monument was Henry van de Velde. The Volksshaus contains halls for various events, the rehearsal rooms of the Jena Philharmonic and a large part of the Jena City Library, the Ernst Abbe Library.

Southwest of the city center is the Schillerhaus with garden and theater, of which the stage space stands. The Urania Jena folklore reserve in the Schillergässchen regularly offers public sky observations and astronomical lectures.

To the east of the town center are the Saale with the Camsdorfer bridge and the guesthouse Grüne Tanne (owned by the Burschenschaft Arminia on the Burgkeller), the founding place of the Jenaische Burschenschaft, which is called Urburschenschaft. The black-red-golden flag, which today is used as a flag for Germany, has its origin here.

Hike to the ruins of Kunitz - Castle on Gleißberg

Hiking from Kahla up to the Leuchtenburg passing Seitenroda