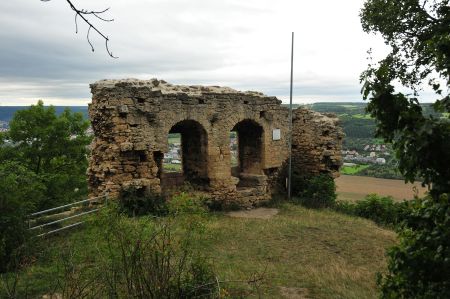 After crossing the wooden covered bridge in Kunitz, we had taken the path into the village center, then walked up the path to the Gleißberg, which first leads us along some wine fields.

While the ascent to the Jenzig mostly takes place on asphalted paths, the trail up to Kunitz Castle ruins is rather a real hiking trail, which impressively reflects the diversity of the local nature, please also read the article "Flora at the path up to Kunitz Castle", which shows the splendor of flowers right on the path.

The Gleißberg Castle, today most commonly called Kunitz Castle related with the Kunitz district of Jena, is the ruin of a Castle at 300 m above sea level, five kilometers north-east of the city Jena at the northern end of the so-called "Horse Shoe", which extends from the height Jenzig up to the castle ruin at the Gleißberg.

According to the well-known historian J.C. Zenker the first owners of the castle probably were the Lords and Voigt of Gleißberg. A Voigt Erwin von Gleißberg built a castle on the Veitsberg in 974. Another Lord von Gleißberg, Walther von Gleißberg, brother of the "feisty" bishop Hildeward von Naumburg, donated the cloister to Erfurt in 1036. On July 9th, 1075, Herman von Glizberg decided the battle at the monastery of Homburg, a family tribe known in the region.

In his research on the history of the Franconian aristocracy of the Reginbodons, Wolfgang Hartmann starts from the existence of an "Ekberts von Gleissberg" and sees in him the father "Liutolds von Gleißberg" and brother Berthas (the founder of the monastery Bürgel and wife of Margrave Heinrich von Groitzsch ). To this branch of the Reginbodonen he assigns also the nobles of Camburg, the Burggrafen of Kirchberg-Kapellendorf and other families of the environment.

Supposedly, the Roman-German king Rudolf of Hapsburg destroyed the Castle of Gleissberg in 1289/90, when he had destroyed 66 castles (60?) To recover Reichsland in Thuringia. A document dated December 17, 1293, issued by Walter IV von Gleissberg at the castle, however, makes this seem unlikely.
From the reciprocal claims which the Wettinians and the Bohemian kings raised, at the same time the German Emperor, in Charles IV, the Margraves were the victors.

On the 8th of March, 1450, Duke William of Saxony gave his advice Apel Vitzthum to Roßla and his brothers Busso and Burkhard as well as Friedrich von Witzleben with Gleißberg, with the obligation to repair the completely desert and decayed castle. The Vitztume played an important role in Thuringia during this time. The duke was probably very close to them. Taking advantage of his confidence, they accumulated riches and possessions to the detriment of the Duke. In 1450 a break broke out, when Wilhelm recognized the true role of the Vitztume. They were expelled from the country.

Wilhelm of Saxony allied himself with the cities of Erfurt, Nordhausen and Mühlhausen, and stormed the castle of Gleissberg in 1451. The Vitzume had repaired the castle, as far as this was possible in the short time. After the storming of the castle the Bergfried was demolished in 1453. For a short time an official was sitting in the castle. But there was no reconstruction and the castle remained a ruin.

Only a few remains of ruins are preserved from the castle, including the wall of a residential building, a half-tower, small remains of the circular wall with buttresses, the stump of a round mountain fountain, and a partly excavated castle fountain. In the north and west, the castle is secured by an extreme steep slope and to the south and east by deep moats separating a forerun from the main castle.

Accurate dating by means of comprehensive archaeological discoveries or building investigations are not yet available. Private literary finds, especially ceramics, can be dated only generally in the 12th to 15th centuries. The massive residential building directly above the steep rocky slope would have been erected or rebuilt only after 1300 due to two sitting window windows with two-lane rectangular windows, which were used in Thuringia during this time. The origin of the Bergfried is to be classified between 1200 and 1250.

Although the ruin is perhaps disappointing, at least as far as the size of the ruins is concerned, the hiking trail up Kunitz through Buchenwald is highly recommended, especially as some benches and tables invite to a picnic. And if you would like to go further, the path to Jenzig and the descent to the campsite is recommended.

Hiking from Kahla up to the Leuchtenburg via Seitenroda

From Campsite Unter dem Jenzig to Kahla at Saale river