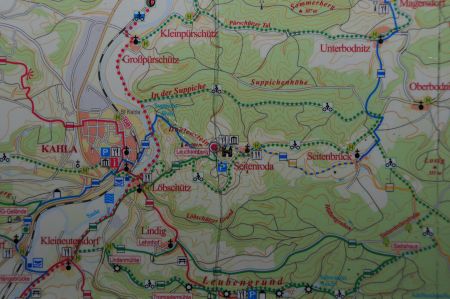 In our article about the porcelain centre of Kahla, we had already mentioned the many hiking trails and cycle paths that connect different destinations in beautiful surroundings, so we had chosen the way up to the Leuchtenburg with a visit to the local museum as our destination of that day.

The renovated medieval castle Leuchtenburg is used for tourism and is also home to the exhibition "Porzellanwelten Leuchtenburg", a museum and part of a "modern" renovation, which has a huge platform called "Walk of Desire", offering a wonderful view, but, in our opinion, considerably disturbed the character of the castle.

The castle is situated on the mountain peak, which is visible from far away at a height of 395 meters above sea level, which, from its top, offers a wide view of the Middle Saaletal as well as the Thuringian woodland, which is why Leuchtenburg is considered to be the "queen of the Saaletal". On 15th of April 1221, the castle was mentioned for the first time, when Hartmann IV of Lobdeburg-Leuchtenburg in Dornburg lodged a legal dispute. In addition to the Lobdeburg, the Leuchtenburg became the most important base for the lords of Lobdeburg on the way to the southeast and to the upper Saale. In the second half of the 13th century, the castle was considerably expanded.

After the Earls of Schwarzburg had been weakened by the Thuringian knight's feud, the winners succeeded in conquering the castle in 1392 and compelled the Schwarzburgs to sell the castle definitively to them in the Leipzig Treaty contract in 1396. Among the winners, the castle became the seat of an office to manage the Wettinian villages in the area. After the defeat of Elector Johann Friedrich the Magnanimous in the Schmalkaldic War in 1547, the castle served as a refuge for the wife and children of the Elector. In 1553, the cistern was then expanded to a depth of 80 m, making it the second-fountain in Thuringia at that time.

In 1705 the administration of the area was transferred to Kahla. A part of the castle was then used as breeding house, poor house and asylum. In the course of the provincial divisions under the Ernestines, the castle fell to the duchy of Saxony-Gotha-Altenburg in 1724 and was still used as a breeding house, then the Leuchtenburg fell to Saxony-Altenburg in 1826 (later Freistaat Sachsen-Altenburg).

Since 1906, the castle has also housed a museum, which has been enlarged in several stages. The collection of the Kahla history and antiquity association was first presented in the Torhaus, the Kreisheimatmuseum Leuchtenburg later established into the Kernburg and has been there since then. In April 2014 the first part of the new permanent exhibition Porzellanwelten Leuchtenburg was opened. In March of the following year, the exhibition was completed.

In the winter of 1920/1921 the castle served as a place of residence and work  for Muck Lamberty and his followers "Neue Schar", along the castle wall there is an exhibition with pictures and texts on the activities of the Neue Schar, which is quite interesting and therefore recommendable. In 1951, the Geschwister Scholl Youth Hostel was opened instead of the hotel, which was closed in 1997 due to non-modern facilities.

In the 1980s the Leuchtenburg was planned as an internment camp for up to 600 inmates. They should be accommodated in the rooms of the youth hostel, the exhibition rooms and cellars. In the main building there was a conspirative apartment for meetings with unofficial employees of the Ministry of State Security during GDR time, on the top floor a secret radio station. In the event of a war, "hostile foreigners" should also be interned at the castle.

The excellent signposting and the marking of the paths made the use of map material superfluous. At all the crossroads are signposted, we found markings easily so that we could concentrate on the surroundings as we descended an alternative route to turn back too. Recommended hiking and biking area.

St. Michael in Jena - Exhibition on Holocaust in Boryslow

From Camping Unter dem Jenzig to Kahla on Saale river