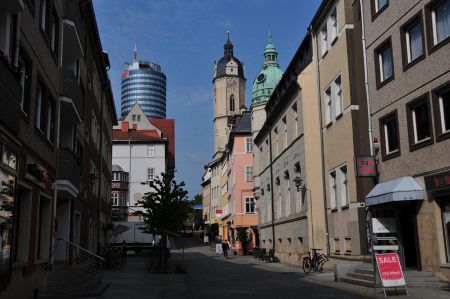 An important point of reference in Jena is the so-called Jentower, which can be seen from almost every corner of the city and therefore also represents a really good road sign for the city tour on foot.

Already visible from the campsite "Unter dem Jenzig", a quiet cycle path, also usable for pedestrians, leads along the Saale to the city center.

The Jentower, also referred to as a unit tower or biscuit roll from the locals, is probably the most striking building and landmark in Jena, at the same time the highest office building in the new federal states. The Jentower was planned from 1969 to 1972 by Hermann Henselmann, one of the most famous architects of the GDR. The high-rise building was to become a Zeiss research center, but proved to be unsuitable and was subsequently used by the university. The high rise should symbolize a telescope. Around the turn of the millennium, the building was renovated and the original structure of the building envelope was lost through considerable interventions in the building fabric. In the upper floors, the tower now houses a restaurant and a hotel.

Nearby is also the late-Gothic, three-aisle city church of St. Michael, the evangelical main church of Jena. Its predecessor, a Romanesque parish church, probably built in the 12th century, had undergone several reconstructions, especially in the construction of the Cistercian nunnery monastery of 1301, which, however, no longer exists today. The nave of today's church was built between 1380-1506, the tower 1486-1557. It is the largest hall church in Eastern Thuringia. Martin Luther had preached here several times. His bronze tombstone (but not his grave) has been here since 1571. Worth mentioning is the restored Renaissance one-hand clock of the church. The church cycle route Jena - Thalbürgel connects the town church of St. Michael with the monastery church Thalbürgel and passes another four churches of the church circle Jena.

We were surprised to find an exhibition on the Holocaust in the city church, which ultimately described the tragic stories of some families during the Holocaust, but also the history of people who tried to help during the National Socialism. Let us refer to Hilde Berger, a Jewess from Berlin who had been deported to Boryslaw. She worked as a secretary for Rudolf Beitz, who tried to protect her. After his convocation to the Wehrmacht, she came to the Plaszow concentration camp. She typed "Schindler's List" with the names of the prisoners who were saved by Oskar Schindler when the Plaszow concentration camp was liquidated.

It was only after the world-wide recognition of the crimes of National Socialism, especially the Holocaust on the Jews, that the people who had not accepted the fate of the Jews at the time, but gradually extended them to a variety of ideas, began to think in Israel Ways to help, and to take personal risks and disadvantages. In the behavior of these comparatively few individuals, however, there were examples of what would have been possible for many other Holocaust contemporaries to help the Jews if they had regarded them as a personal obligation. These examples were to be handed over to posterity as well as to crimes.

In 1953, the Knesset passed the law in memory of martyrs and heroes. The execution of the Yad Vashem memorial was commissioned to set up a memorial department for the "righteous among the peoples" who "risked their lives to save Jews". Since 1963, a public commission, under the auspices of Yad Vashem, took over the task of examining proposed persons according to certain criteria and, if necessary, of recognizing them as "righteous among the peoples". It consists of personalities who are known in Israel, who often are Holocaust survivors and who hold or hold state or political positions. Chairman is a Judge at the Supreme Court of Israel; this was first Moshe Landau.

Among the "righteous among the peoples" is the couple Bertholt and Else Beitz, whose life story is also documented. A very meaningful exhibition with many picture documents and text documents, worth visiting.

We have 462 guests and no members online