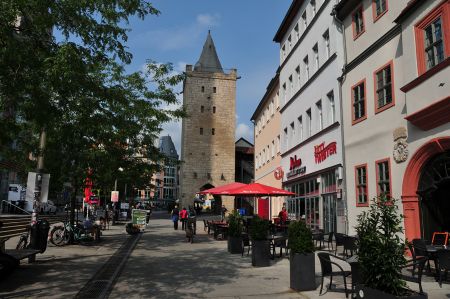 From the campsite "Unter dem Jenzig", our route into the city center of Jena took us along the asphalted cycle path along the river Saale. Passing the university we will explore the remains of the ancient fortifications of the medieval Jena today.

Like in most medieval towns the local walls were primarily a fortification for the protection against attackers. It surrounded the village in whole or in part, depending on the terrain, natural occurrences such as the existing rocks were included. The city wall could only be passed through the city gates. To erect a defensive wall was a privilege in the Middle Ages, which was conferred by the right of fortification. The defensive wall became a feature of a city or a market. However, the city or market law was not automatically linked to the right of attachment. In the Middle Ages there were also villages fortified with walls, for example in the Thuringian basin and in the vineyards of South-West Germany.

From ancient times to modern times, city walls have become an indispensable part of any city. It is often debated whether ancient Greek cities already had city walls in archaic times. During the time of the Pax Romana, there were exceptions, for example, the ancient Rome itself, which had no usable walls until around 270, as it left the legions as protection. In this phase, cities in the core area of the Roman Empire were often surrounded by prestigious grounds (some civitas had city gates, but no walls). But this changed in late antiquity.

In the 13th century, the lords of Lobdeburg granted city law to the market town of Jena. This also included the right to erect military installations and buildings. Since the beginning of the 14th century, Jena had a stone fortification line that encircled an approximately rectangular one from 500 to 400 meters, almost the size of a Roman fort.

The task of the city was not only the protection of citizens from militarily organized attacks or criminal overlaps, but also the control of visitors and flows of goods that flowed into the city. At the same time, the city walls were an obvious dividing line between the land law applicable in the city gates and the legal self-organization in the urban area.

The city wall of Jena with the sidewalks inside was located as an up to 8 meters wide water way. On the west, south and east sides, there were city gates, which led to the important connecting roads to the long-distance and trade routes. The four corners of the fortifications were strengthened in the late Middle Ages by forward towers and bastions.

The longest surviving section of the medieval city wall of Jena is located between the Johannis Gate, the only remaining gate and the Pulverturm, the north-west corner tower with its gun roundabout. The wall goes back on extensive renovations in the 15th and 16th century and has a length of 52 meters.

As in the other areas of the Jena city fortification, limestone was used as a starting point, and a small amount of colored sand stone was used, materials which could be broken on the surrounding slopes.

There are also some tower remains of the old city wall. These include the red tower, which had been collapsed in 1995 but was reconstructed in the meantime, but at the south-east end. From Johannis Gate, a short section of the wall, on which the so-called wall house on the wall was being built, runs to the former Pulverturm in the north-west of the town center.

Kahla - Porcelain for everyone from the center of Porcelain

Travelling to the Caravansalon in Düsseldorf - Stopover in Jena