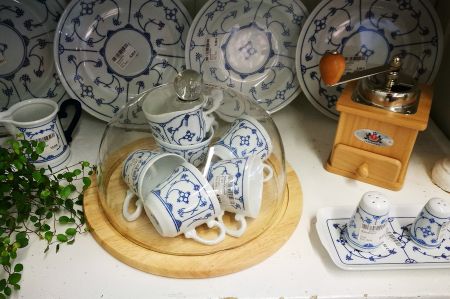 After the first visit of the city center of Jena, we now wanted to see to the city of Kahla, which is considered not only as the center of porcelain from Thuringia, but also an interesting inner city as well as an imposing fortress in the immediate vicinity to the hike to as a destination.

The other hiking and biking trails of the region, which we will explore later, will be described later.

But now getting back to porcelain: porcelain production has a long tradition in Thuringia, porcelain has been made in Kahla since 1844. The porcelain factory Kahla is one of the largest porcelain manufacturers in Germany and also includes works such as Arzberg, Hutschenreuther and Schönwald, as early as the beginning of the 20th century. Until the 1980s, about 18,000 employees were working in the "VEB Feinkeramik Kombinat", whose seat was Kahla. With the fall of the GDR, the company was initially privatized, but turns bankrupt shortly afterwards.

In a guided tour of the modern porcelain production at the location in Kahla, we experienced the production of "porcelain for the senses". An exciting mixture of handwork and state-of-the-art technology, which we had already admired in Meißen during our visit there. Since its founding in 1994, Kahla has invested almost 30 million euros in new technologies and facilities, making it one of the most modern porcelain companies in Europe. After the informative tour of the production we were able to enjoy fresh Thuringian sausage in the restaurant.

After the ups and downs of the turnaround, Kahla has once again become one of the most innovative porcelain companies in Europe. Under the motto "Design with added value", the company is now producing multifunctional porcelain articles of the highest quality "Made in Germany" for the household, hotel and gastronomy as well as advertising porcelain for corporate customers. Sustainable production combined with innovative ideas are the main focus.

For example, Kahla's patented "touch" is unique porcelain with a velvety surface finish. With "Notes" Kahla also has a writable porcelain in the assortment. "Magic Grip - porcelain with an integrated silicone foot" - ensures that the dishes do not clatter anymore, nothing slides anymore, and that noble surfaces are protected from scratches. More than 90 design awards since 1994 for innovative product ideas by the Kahla designer Barbara Schmidt and external partners confirm the success of this modern company concept.

Traveling to the Caravansalon to Düsseldorf - Stopover in Jena

Karlsplatz, Karls Church and the MuseumsQuartier