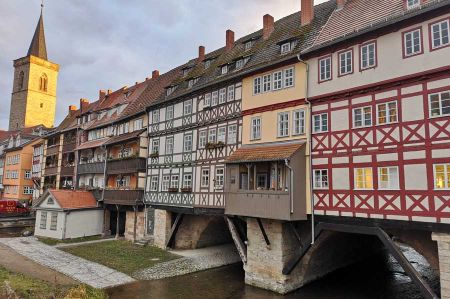 Again and again we come across some ancient trade routes as part of our project work, which today can be traced back to the plans and systems of our forefathers in the form of highways, railway routes or bridge systems.

We have already specifically described this using with the example of Via Egnatia passing the modern countries of Albania, North Macedonia, Greece and Turkey. Even if the modern course of Via Egnatia as a motorway only partially corresponds to the ancient Roman road. The construction of these traffic routes was always intended too for the trade in goods, even if these routes partially functioned as military roads and were also named in this way. In addition to trade, there was always an exchange of knowledge, cultural heritage and technical progress along these routes.

Via Regia is a trade route in an east-west orientation 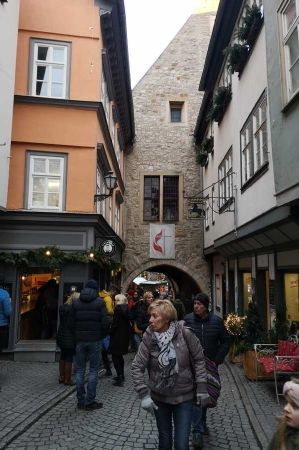 Sometimes not quite as old, you can find these trade routes across Europe or at least remnants of once important nodes and fords or bridges that were of great importance, some of which are still today. We had already heard a lot about the Krämerbrücke in Erfurt in advance, because this bridge was also part of an important trade route, the Via Regia. The Via Regia was an important west-east trade and military route in the Holy Roman Empire in the Middle Ages and early modern times, as well as a popular pilgrimage route. It connected the Rhineland to Silesia via Frankfurt am Main and Leipzig and led in its entire length as a pilgrimage route from Santiago de Compostela to Moscow, which is still very popular today.

In Erfurt there was initially a ford on this route, which was suitable for crossing the Gera river. When exactly a first bridge was built at this point is still unknown. Today we only know of fires that are said to have destroyed the wooden bridge construction, so a document is known from 1117 that describes the destruction of the “Chandler Bridge” by fire. The first documentary designation of the bridge with "pons rerum venalium" can be traced back to the year 1156, since there was already trading on the wooden bridge at that time and the first traders had set up junk shops on the left and right.

Due to repeated fires in 1175, 1178, 1213, 1222, 1245, 1265 and 1293, the Erfurt Council acquired all bridge rights from the monasteries in 1293 in order to be able to build a new stone building, which in 1325 had uninhabited half-timbered houses on the Bridge to be completed. Stone churches with gateways were built on the two bridgeheads, the Benedictikirche at the western end and the Aegidienkirche at the eastern end. St. Aegidien already existed as a bridge chapel. 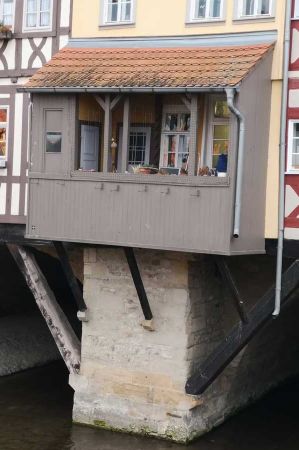 With the takeover of the bridge rights, a stone bridge was made possible for the first time, which was built wide enough to also operate junk shops on the bridge. Gradually, the bridge was widened, the junk shops became shops, the operators lived on top, i.e. a residential and business bridge. Today the Krämerbrücke is the oldest secular building in Erfurt and is one of the most famous landmarks in the city with a double-sided, closed bridge structure with half-timbered houses. It is the longest house-built bridge in Europe. The pedestrian bridge spans the Gera called Breitstrom here and connects Benediktsplatz in the old town center with the Wenigemarkt in the eastern extension of the old town.

The 79 m long vault bridge was built in limestone and sandstone masonry and has since consisted of six visible barrel vaults with clear widths from 4.8 m to 7.8 m and a vault cut from 2.4 m to 3.9 m. The vault width is between 19 m and 22 m, the apex and the fighter are between 40 cm and 50 cm thick.

After a city fire in 1472, which destroyed half of the city and the houses on the bridge, the Krämerbrücke was rebuilt in its current form, but with 62 half-timbered buildings. In order to make the three-storey, 13 m to 15 m high houses habitable, the depth of the building was increased by wooden explosive devices arranged next to the vaulted bridges. The width of the bridge, completed in 1486, has since been approximately 26 m with a clear width of 5.5 m between the house lines. The name Krämerbrücke has been common since 1510 at the latest. 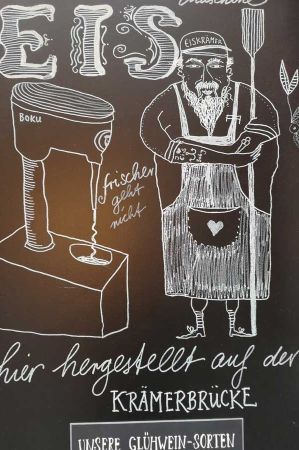 By the 18th century, the number of houses on the bridge had dropped to 38 due to building associations and new buildings after fire damage; today there are still 32 houses. The Benediktikirche was sold in 1807 and demolished in 1810 for the construction of a residential house. The church tower had to give way to the new parallel town hall bridge in 1895, and the city also considered demolishing the entire bridge.

Houses 12 and 13 were demolished and rebuilt in 1952 due to damage from World War II (U.S. artillery shelling in April 1945). The wooden explosive devices, including neighboring buildings 11 and 14, were damaged too that they had to be replaced. For this purpose, 11.5 m long trunks with a cross section of 48 cm × 36 cm or 26 cm × 36 cm had to be installed, the procurement in 1952 was complex and took months.

Due to its special importance for the city and the general building history, the Krämerbrücke was given special monument protection in the GDR. From 1967 to 1973, all houses were restored. Extensive repairs to the vault bridge took place in 1985/1986 and 2002. Since then, the structure of vehicles with an axle load of up to 11 tons has been allowed to be driven on.