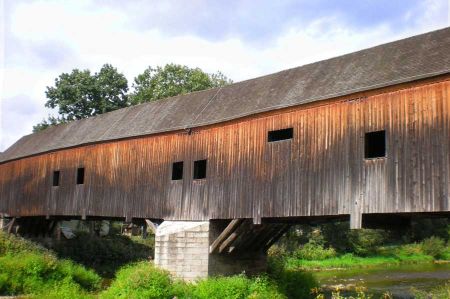 Our friend Jörg invited us to a caravan or trailer meeting for bicycles (we will report later) in Gera for the first time in Germany and probably also around the world, a region that we had hardly explored so far.

So we came across the country, avoiding the highways, to Gera-Wünschensdorf, where we first had to cross the Elster and this over a single-lane, roofed wooden bridge, which is one of the last remaining roofed wooden bridges in Germany. The bridge is now a listed building and we remembered a comparable bridge construction in Cheb in the Czech Republic. The Wünschendorf bridge was first built in the 13th century and has since been destroyed several times. Today's bridge was built in 1786.

On to the covered wooden bridge of Wünschensdorf 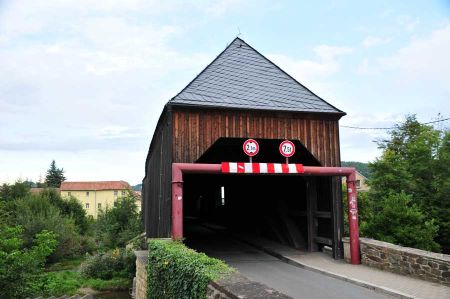 As almost always when we are invited to friends or acquaintances in places that are still unknown to us, we use the time to take a short tour of the place, take a few photos that we can then use for our articles. So it should first go along the Elster to the wooden bridge, then through the village back to the first caravan or trailer meeting for bicycles.
The first information about the bridge was quickly found on site, the bridge is 71 meters long and 4.30 meters wide, which allows one-sided driving. Apart from the brick foundations, the entire bridge is made of wood and covered with shingles. It rests on 40 to 50 cm thick wooden beams that were cut in the Weidaer Staatsforst. Architecturally, the bridge is one of the covered wooden bridges. The construction is similar to that of the Hohenfichte wooden bridge, which dates from 1832.

On the history of the wooden bridge in Wünschensdorf 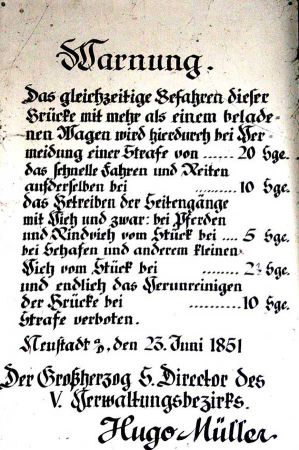 The lands around the wooden bridge were ruled in the Middle Ages by the Reussian aristocratic family with ancestral castles in Gera and Weida, who maintained a large estate and the Mildenfurth monastery in Wünschendorf. On the Vitusberg, a bridge crossed the 40 meter wide White Elster probably as early as the 11th or 12th century. During the flood of February 27, 1784, this bridge, which had certainly been rebuilt several times by then, was destroyed by ice masses and meltwater flowing down the river. In the following years, today's building was erected at the same location. For the time, it was a masterpiece of the planners and carpenters, which was achieved on behalf of the Saxon state government and with the help of the local farmers and landlords. The bridge was damaged several times by ice masses and floods. In February 1830 the floor of the bridge collapsed after the ice crushed parts of the structure.
The bridge was not completely renovated until 998. It is still open to traffic today, albeit with severe restrictions: Height restriction: 2.10 m, weight restriction: 2,000 kg and top speed: 10 km / h.
In 2007 it was voted the most beautiful bridge in Central Germany by the viewers of the MDR, in front of the Göltzschtalbrücke and the Krämerbrücke in Erfurt. 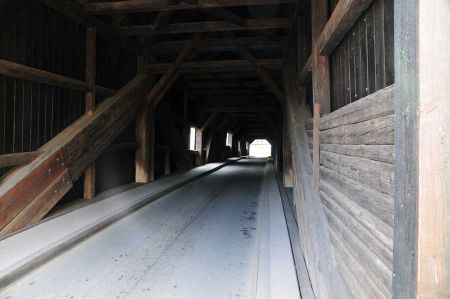 The historic wooden bridge is a classic bottleneck that can only be accessed in a single lane. Since there are no traffic lights, mutual understanding is required. To make matters worse, both entrances are in curve areas and the bridge is difficult to see. Since the renovation, a footpath within the bridge has been available for pedestrians.
A spacious bypass of Wünschendorf was planned to relieve the old wooden bridge. However, a first related planning approval procedure failed in spring 2008. The construction of a bridge to relieve the historical wooden bridge parallel to it also failed due to a lack of will and the necessary money and will probably have been put on record forever.
The bridge has been rebuilt since July 2013 and was reopened to traffic in September 2014. It now has a steel and concrete substructure. The passability was maintained with restrictions for vehicles up to 7.5 t, as the clearance height is limited to only 2.10 m.
Absolutely worth seeing!