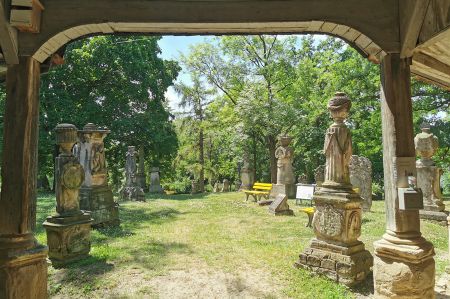 It was simply the research for another destination of a bike tour in Burgenland that brought us to the old cemetery of Buttstädt, here it was above all the proper name Camposanto that had aroused our interest.

Clearly Italian, in our opinion, but the term Camposanto only became common in the 19th century, but then referred to a special design of the cemetery based on the Italian model.

What is a Camposanto and why Buttstädt 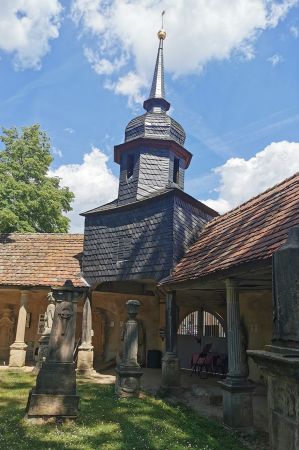 Camposanto means "holy field" and is the Italian term for a cemetery, especially for the courtyard-like enclosed version with an archway open to the inside. The best known is the Camposanto Monumentale, next to the Cathedral in Pisa, built by Giovanni di Simone between 1278 and 1283 and frescoed in the 14th and 15th centuries. Among other things, it served as a model for the Sebastian Cemetery in Salzburg (1595 to 1600).

As a result of the Reformation, cemeteries of this kind were established in the 16th century, especially in Central Germany: Leipzig (1536), Arnstadt (1537), Altenburg (1552), Buttstädt (1592), Eisfeld (1554), Eisleben (1538), Gera (1556), Halle (1594), Saalfeld (1553), Weida (1564). With the exception of Halle's Stadtgottesacker, the Eisleben Kronenfriedhof and the Buttstädter Gottesacker, nothing or only a few remnants of these have survived. The reformer Martin Luther, in his essay “Whether One Should Flee from Dying”, advises moving cemeteries away from the church. These burial sites were then called Gottesacker. 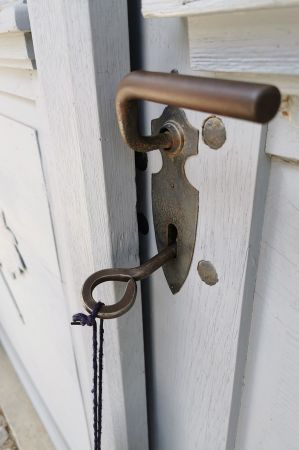 The separation of church and cemetery also changed the legal situation. Now the city and not the church was responsible for the construction and maintenance of the cemeteries. A second reason for moving away from the church, which was in the center of the settlement, and outside the city walls was the fear of plagues, especially during the Thirty Years' War.

The Camposanto in Buttstädt is the oldest preserved cemetery in Thuringia. At that time, the cemetery was still well recognizable today, outside the medieval city walls. A change in the burial system as well as building measures and a lack of space finally led to the decision in 1537 not to keep a cemetery in the town of Buttstädt near the church. All burials now took place in the cemetery of the Wendish St. John's community, the Camposanto. The so-called "Gottesacker" experienced an expansion in 1591 due to urban prosperity and change.

With the e-bike to Buttstädt 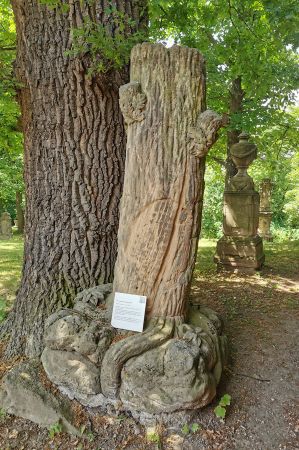 Once again, coming from Billroda, we chose the Tauhardt forest path in the direction of Rastenberg above the Harschbach stream, then followed the cycle path in the direction of Weimar / Buttstädt, which is mostly lined with fruit trees off the main road. After the ascent at Billroda, the descent is almost continuous, so that you can more or less let the vehicle roll while looking at the small group of lakes just before leaving the forest. We only used the cycle path parallel to the country road for a section from Rastenberg to Hardisleben, then the paved path followed again behind the buildings to the tracks of the new ICE line, which is crossed here by means of a bridge. Buttstädt is reached a little later, where we drove directly to the Camposanto, which is well signposted. We parked the e-bikes and got the key to the cemetery, which is also well signposted and quite easy to handle, so no registration is required either, unless you want to book a guided tour.

From the churchyard to the graveyard 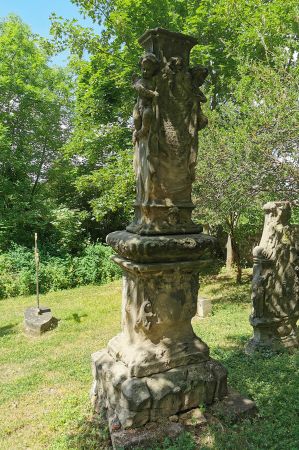 Anyone who walks the short path from the market square with the late Gothic St. Michaelis Church to the Old Cemetery can follow an important cultural-historical turning point step by step.

As can still be clearly seen from the course of the streets, the Old Cemetery lies outside the medieval city limits.

He is a witness to the far-reaching reformation of the funeral industry that began in the late Middle Ages.

The old custom of always choosing graves as close as possible to the altar – i.e. in the church or around it – had come into crisis. There was a shortage of space in the “cemeteries” and the hygienic conditions were questionable. 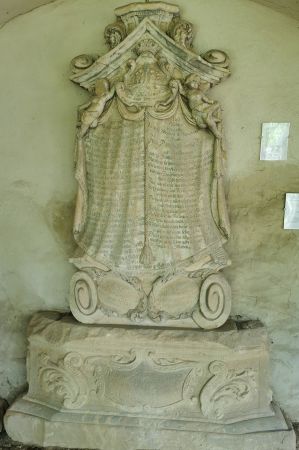 So it was gradually decided to build new cemeteries outside the city walls.

One cannot overestimate the spiritual impertinence associated with this: the dead should no longer find their last resting place in the immediate vicinity of salvation, the church, or the altar, but outside, where otherwise only the outcasts were buried. The cemetery changed from the churchyard to the "God's acre".

At the same time, and this can also be seen in Buttstädt in an exemplary manner, the strengthened bourgeoisie of the time used the new facilities for representation.

With the burial ground surrounded by arcades, which today is often called Camposanto after Italian models, a completely secular building was created. This is in no way contradicted by the fact that the imposing tombs of the Renaissance and especially the Baroque always present the city's dignitaries as pious and devoted to God. 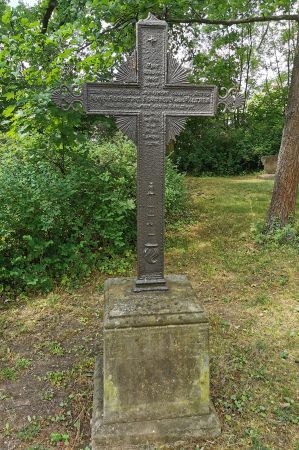 In Buttstädt, it was decided to create the Gottesacker in the place of the previous cemetery of the Wendish St. John's parish, which, being a stone's throw from the gates of Buttstaedt major, was ideally suited.

In 1591 the site was expanded and construction of the arcade halls began.

A Buttstadt lily and the year 1592 still adorn the outside of the gate today.

The old complex, together with the Wendish St. John's Church, fell victim to the city fire of 1684, although some elements, such as some of the sandstone columns that support the arcades, were apparently reused. 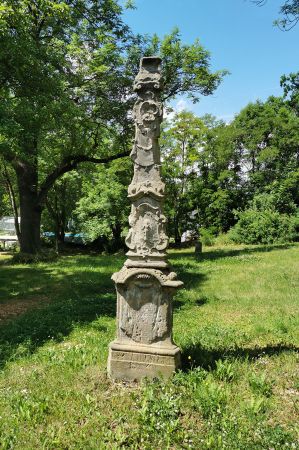 In contrast to other Central German "Campisanti", the Buttstädter Friedhof was certainly never completely surrounded by arcades.

The two colonnades that delimit the Gottesacker to the north and east contain some of the most beautiful tombs from all occupancy periods since the Renaissance.

Unfortunately, only a fraction of the tombstones have been preserved on the burial ground, which opens slightly sloping to the south-east.

The cemetery must have been completely overcrowded in the middle of the 19th century, which was the reason for closing the old, no longer expandable facility and opening a new cemetery nearby.

From Friesland crossing the Harz Mountains to Halle – Saale