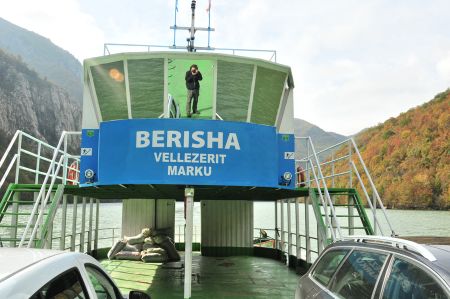 About two hours we had already crossed the mountain valleys and canyons until we ended up in Fierze, a small village in the north at the end of the Koman dam.

From there, a road leads into Kosovo to Prizren, another town worth visiting, we will report later on, because now we wanted to continue to the Valbona valley. At this point, it should be mentioned that, when entering Kosovo, a special insurance for the vehicle has to be signed, since the green insurance card of some European insurance agencies usually do not include Kosovo.

The ferries of the Koman dam open up north-east of Albania with the city of Bajram Curr and the region of Tropoja, which means that transport on the lake is of great importance. Smaller boats and ferries bring people and goods to secluded villages, often far away from the lake, but only reachable on the water. The journey lasts two and a half hours and is popular with tourists due to the passage between high rock faces through narrow gorges, which are reminiscent of Norwegian fjords. Our conclusion: It is in any case an absolutely worth seeing tour passing the Koman lake, whether one travels with own vehicle or as a passenger in one of the passenger ferry crossing the reservoir, as well as some international hikers did, we met on the way. Everyone wanted to go to the Valbona Valley, in order to undertake their tours through the Albanian Alps. So we came across an American woman who traveled through Albania as a backpacker, just like two New Zealanders who had been on the road to the Valbona Valley and were now adapting their travel routines accordingly to that changing.

The Koman dam is part of a series of reservoirs along the course of the river. Due to acute water shortages, electricity production had to be drastically reduced a few times in recent years. The Koman dam is fed, next to the Drin and the Valbona from the valley of the same name and the Shala river. The Koman lake reaches as far as the dam of the next dam project, the Fierza Dam (Liqeni i Fierzës), while the Liqen i Vaut të Dejens jammed by the Dam Vau-Deja reaches almost to the dam of the Koman dam. With around 500 million cubic meters of capacity, Lake Koman is the smallest dam in the cascade of reservoirs, all of which serve the power supply.

The farther we approached the end of the reservoir, the denser the sky was covered by clouds, until at last there was no more blue in the sky. First raindrops did not announce anything good. So we were glad to have enjoyed the ferry ride at sunshine. The water color of the reservoir had also changed markedly due to the rainfall of the last few days. From blue-green it had become mineral brown, the proportion of the sediments was so strong.

The place Fierze itself is little to see. Fierze is not a typical village in the Albanian province, not even a rural development can be seen. A few houses, mostly of concrete parts, a jetty for the ferry, which is described as adventurously still positive, but nothing negative about the helpful ferrymen who can do their job. With our arrival in Fierze, we quickly noticed the emerging discussion which initially led to the moving of two fishing boats before the captain decided to land on a small hill to put on the loading ramp. Quickly, shovels and pickaxes were available to remove a large stone from the ramp. For us no problem, since we had used the vehicle in off-road mode anyway.

We wanted to go to the Valbona valley soon, however, so we set off quickly after disembarking.