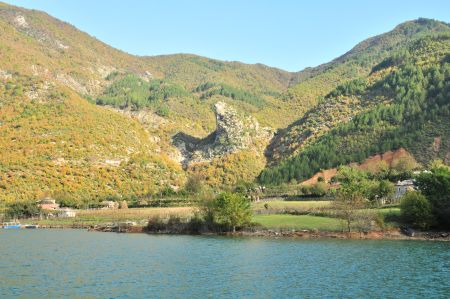 The ferry trip over the Koman Lake (Albanian: Liqeni i Komanit) usually takes about two and a half hours and is increasingly popular among tourists because of the passages between the high rock faces and the narrow gorges of the Albanian Alps.

Already at the beginning of our tour crossing the Koman Lake, we had seen some farms in the seclusion of the valleys of their lonely existence, smaller boats bring people and goods also to the remote villages, which are often far away and high above the lake, however just accessible by water. So we talked about the local farmers at the Legjenda campsite and were very interested when we learned that an intermediate stop is possible to visit such a farm and its surroundings.

So we set off again for the way to Koman, but this time we took the passenger ferry across the lake. On the way the small ferry always stops again and leaves people and goods on board, which then gradually disappear in the mountains. So on the way a merchant came along with his boat and fixed himself to the ferry to save even the fuel. In his boat the most important object of his business could be seen, a traditional scale.

A little later, we had arrived at the intermediate destination of our today's tour, a farm which, besides the cultivation of fruit and vegetables, concerned itself with the cultivation of maize and hay for cattle. Also some wines were planted here. We were invited with hospitability, could eat very delicious meal, especially the sheep and goat cheese is to mention, we could look around the farm and their environment extensively, even could do little hiking tour before we were brought back by the ferry back about 4 hours later.

The aim of the farmers also is to open themselves to the hiking and outdoor tourism. So there were even some guest rooms, which are also offered to hikers. If you are interested in visiting a farm or maybe even exploring the surrounding countryside, please contact reception at Camping Legjenda.

Later, a passenger reported that here on some farms, also because of the inaccessibility of the mountains marijuana is cultivated by some farmers that would then be smuggled to Europe. Even we have not seen such fields, maybe ....

In any case, it was a wonderful experience to spend few hours on the farm. Not only because of the food, which was completely produced on the farm, without any artificial fertilizer or other additions - simply delicious and natural. And no one took the word organic farming into his mouth.

An exciting excursion to Lake Koman