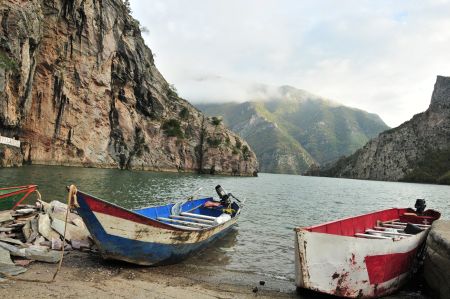 Several travelers and campers had already told us about the gorges and the lake at the Koman dam, which is said to contribute to the indescribable character of its nature, due to its length and narrowness.

The river Drin is responsible for the formation of these canyons, because for thousands of years it had dug itself into the rock there and washed out the Albanian Alps. With the construction of the dam near the village of Koman, a water reservoir was built, which extends as a long hose over 34 kilometers through the narrow valley of the Drin and is hardly more than 400 meters wide. The lake is not more than 50 meters wide in the narrowest gorges, surrounded by hundreds of meters high rock walls.

Between 1980 and 1988, a stone rock dam with a concrete exterior layer had been built near the village of Koman at the beginning of the gorge of Malgun (gryka e Malgunit), which had been supplied with a hydroelectric power station too. The stone dam is 115 meters high, consists of 600,000 cubic meters of stone material and accumulates a lake of twelve square kilometers. The water level is at an altitude of 170 m above sea level. The connected hydroelectric power plant, originally named after Enver Hoxha, has a 600 MW capacity with four turbines originating from France, which at the time of construction was the largest plant in Albania and throughout South-East Europe.

We had also heard of crossing the lake, both as passenger and by car, which crosses the lake from Koman daily, which was also in our interest. Again and again, there are contradictory statements with regard to the ferry passages, which are then spread too. We can report as follows, since we ourselves used the ferry at the end of October this year: In the winter months there are now both a passenger ferry and a small car ferry for up to 4 vehicles, as can be seen from the attached pictures. This ferry departs as required, registration is essential.

The registration can be made, for example, through the Legjenda campsite in Shkodar or a travel agency. In the summer months, a large car ferry crosses the route, but you should also register then because some high traffic in direction to Valbona Valley is possible. The Valbona Valley is an increasingly popular destination for mountain hikers, and there is often a backpacker who is on the way to Valbona Valley and wants to use the passenger ferry. But the number of motorhome caravans is also steadily increasing, for sure mostly slightly off-road vehicles.

The access to the dam and lake at Koman is suitable from the express road E 762 connecting Shkodra to Tirana. The weather, when we left, was modest, but perhaps we are lucky and the sun is still coming through. On the SH 28, it first goes to Mjede, where the SH 25 near Vau-Deja joins the Drin. The Drin is more like a lake landscape than a river. The road is from now on narrow, steadily increasing, partly badly littered, so one should drive carefully. The serpentines seem to have no end, despite the not very long distance to Koman. Above the village the dam is already recognizable from a distance, to which a gravel road is leading. Once on top, the passage through a narrow, unlit tunnel to the small feeder of the ferry. Please do not hassle, despite the tightness of the place, everything is well organized and functioning. Follow the link to the map!

It is already an experience to observe the departing and arriving vehicles, no question. Sometimes one is wondering about the design of the vehicles. Just a moment, what is that, a  blue bus on the lake? But just on the first view, the owner of this boat just used the complete cabin of the former bus, which was put on a boat and now serves as a ferry cabin. Even the steering wheel was still being used. A colorful hustle and bustle. So we were curious about what else we would discover.

In the second part of our article, we will report about the ferry crossing while sailing in direction of Valley Valbona.

To the beach of Shkodra - fine dark gravel is awaiting us

In hiking shoes along the Albanians Alps at Nec