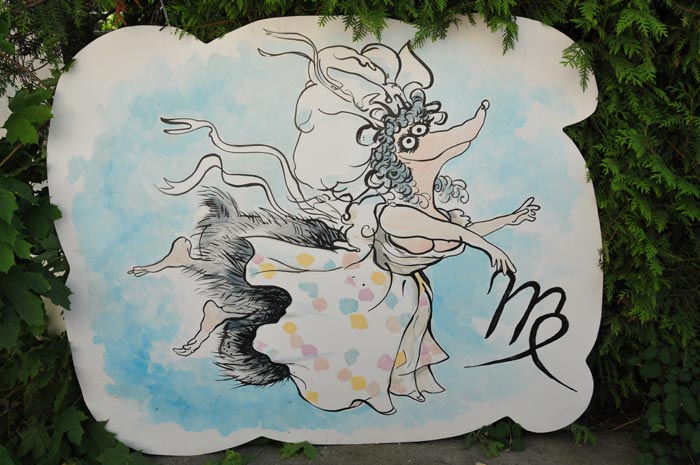 On the fourth day of the Grenzenlos Festival, while we were touring around the area, various caricatures drew our attention. They enlivened the festival area. With regard to freedom of the press and expression, Grenzenlos (Borderless) Festival fits the expression of “as the name implies” with either caricature exhibitions or graffiti works. The term of “borderless” does not mean that individuals can do whatever they desire. The festival reflects in a good way that tolerance for the different cultures is gained by the freedom of expression in music and art. 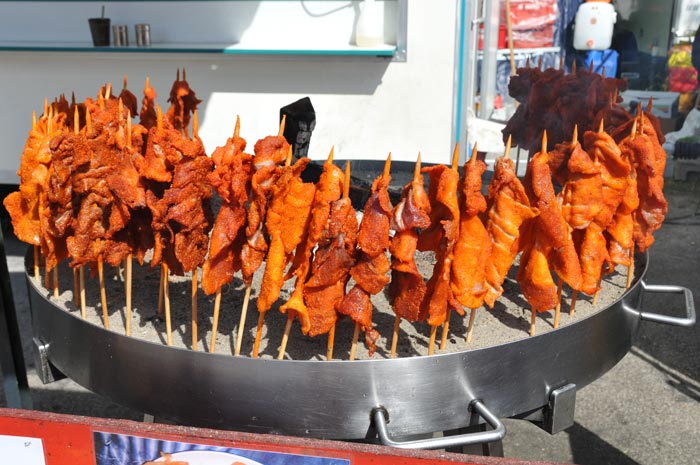 The food stands in the festival area do not solely consist of the local cuisine. You have a chance to try various international tastes. For instance, this specialty, which comes from Africa to the city of Ausburg, both makes a strong impression and appeals to the taste buds. The charcoal in the middle of this barbecue, which is called Safari-barbecue, enables to roast the skewers. Also, there is a Miraculous Waffle Machine that makes delicious waffles. You may read German article here. 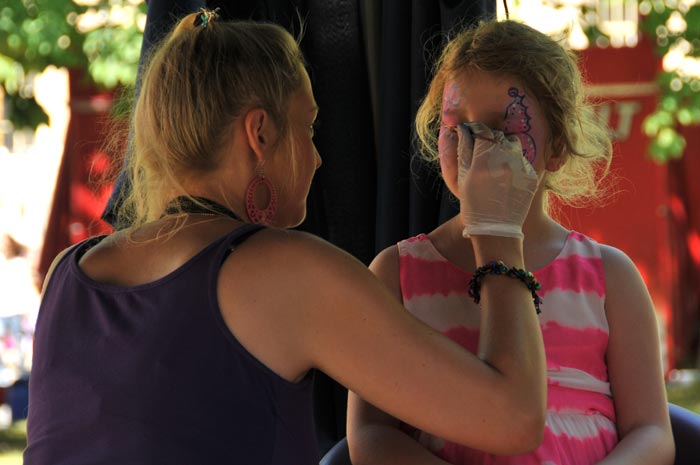 Make-up for everybody! Throughout the ten days, the festival presents entertainment including a good deal of art branches not only for adults, but also from 7 to 70. Playing different roles with make-up and discovering the borders of make-up, draw the attention of kids. 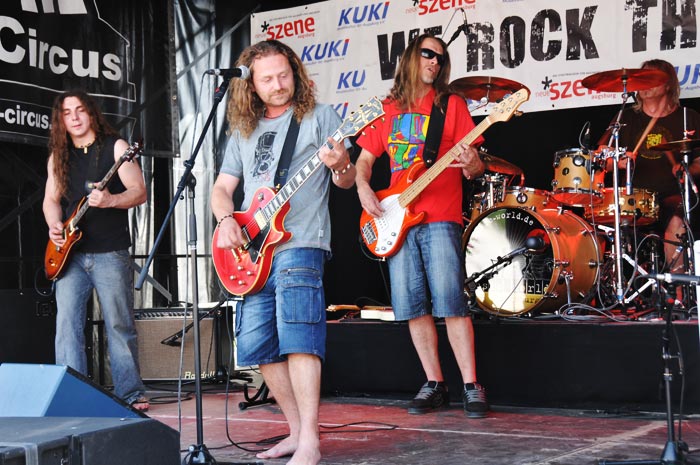 Towards the evening, stages started to get into action and the band Hush from the Czech Republic began to perform on the Kuki New-Stage. They entertained the audience with rock and pop music. Formed in 1996, after a demo record, Hush released debut album in 2003. Apart from Czech Republic, they were invited to festivals in several countries such as Netherlands, Germany and Poland. Their fifth studio album hit the shelves in 2013. 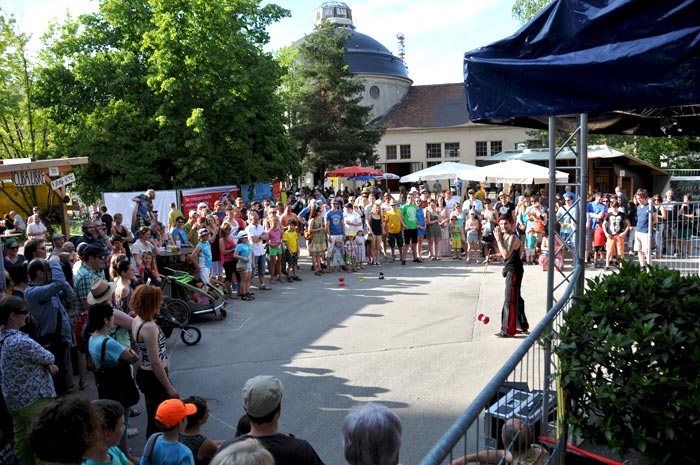 After the performance ended on the Kuki New-Stage, we took a look at the other stages until preparations for the next band were completed. While showman and theater player Abraham Thill was presenting his talents to the audience, we observed that he was having fun, too. When he realized that his show was watched everywhere, Abraham Thill started to perform in a variety of world tour. During the first eight years, he performed as a street artist in the streets of California’s big cities and the most beautiful squares. After these beginning years that he improved himself, he discovered the world of international festivals. With his show, including the elements of handcraft, comedy and theater, he created an exciting atmosphere for the audience of Grenzenlos Festival. 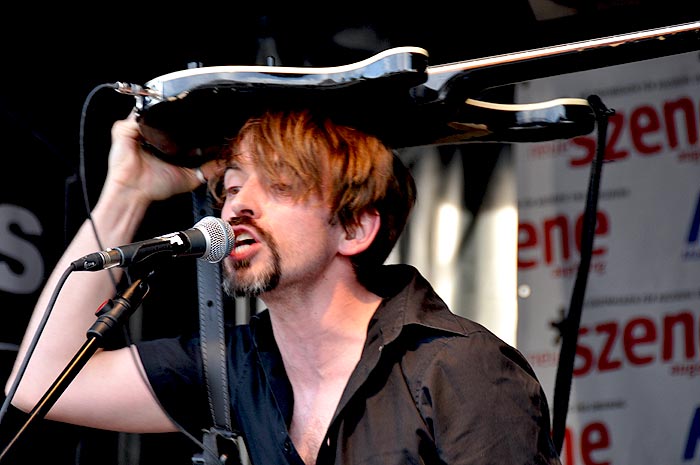 Pop-funk band Hörstreich from Augsburg, already began to perform on the Kuki New-Stage with the songs that band members describe as noisy, but friendly; fierce, but beautiful. The band, who fits seven albums and concerts in several cities of Europe, clubs and festival in thirteen years, also performed in a supermarket. You can understand as you watch how crazy they are after all. It was amusing to watch the guitarist while he was playing the guitar by lying and carrying the guitar top of his head. 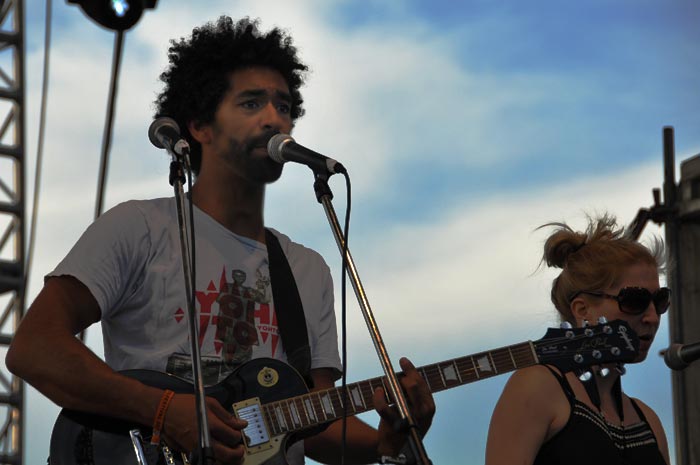 While we were taking a look at the main stage, we encountered Yohto that was transmitting new frequency at the Arena – Open Air Stage. According to the description of band members, the new album “New Frequency” is the creation of a new time zone and they present it proudly. Yohto makes Reggae, Hip Hop, Latin and Funk music that band guarantees for a sweaty musical journey. Each song brings something new and different in itself, but all of them have common direction: Beat and Energy. The band joins the festival from Germany’s city of Nuremberg and presents a musical show that is full of rhythms, entertainment and dance. 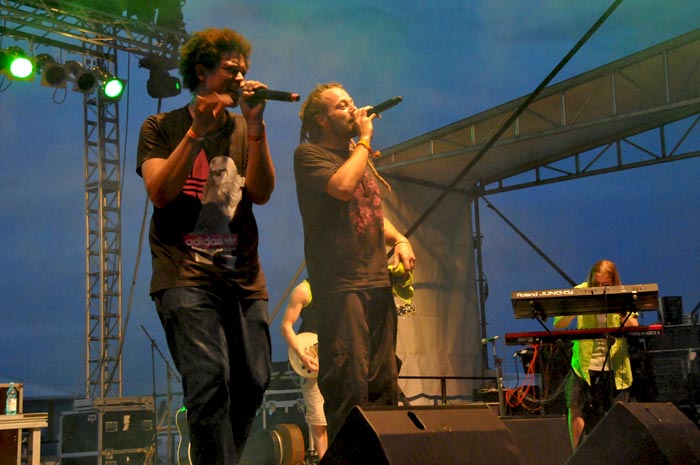 When another energetic band from Germany’s city of Regensburg started to perform at the Arena – Open Air Stage, the audiences were still sweaty. The band “Unlimited Culture” has an important place on the reggae stages of Bavaria and is very successful in last seven years. The five membered band, who performs at festivals and clubs, writes the lyrics in the Bavarian dialect, German and English and music of the band exhilarates the audience. 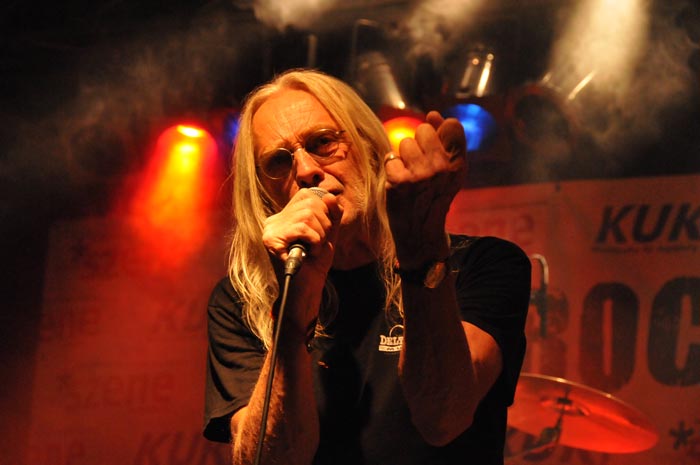 Kuki New-Stage introduces the last band of the night: Sunday in Jail. Even though the repertoire of the band addressed to older ages, it certainly drew the attention of the young audience. Besides their own music, they covered songs by Eric Clapton, Cream, Stevie Ray Vaughn, Dr. Feelgood and Gary Moore. 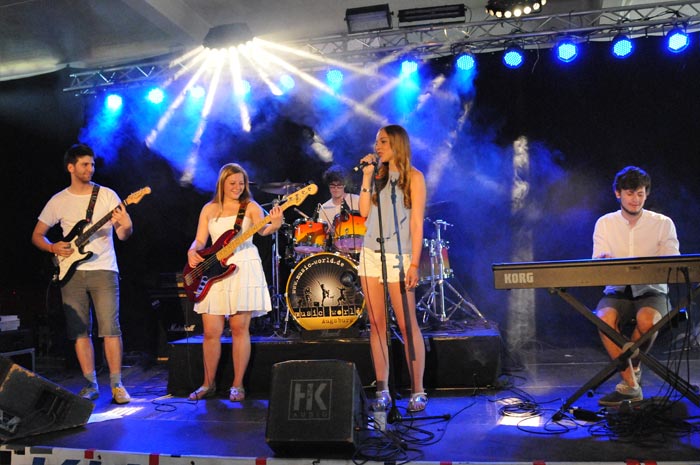 We began the fifth day of the festival at the Werkstatt (Workshop) stage. While “Collecting Boxes” was gaining the first stage experience, we accompanied the band that makes a blend of pop and rock music. The band members write all the songs with meaningful contents and love for music that shared by five members of the band forms the current line-up. Although they are shy and inexperienced on the stage, these young talents accomplished their first stage experience. 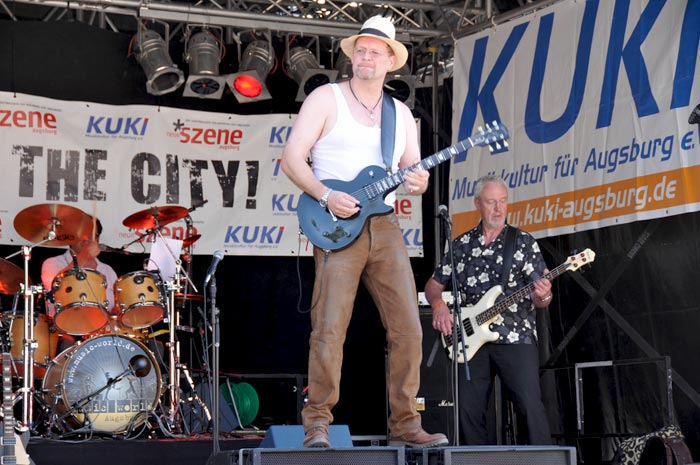 “Blow up Bluesband”, which is a blues and rock trio, performed at the Kuki New-Stage. They presented the songs of Gary Moore, Joe Bonamassa, King King and more with their specific interpretations to the audience. 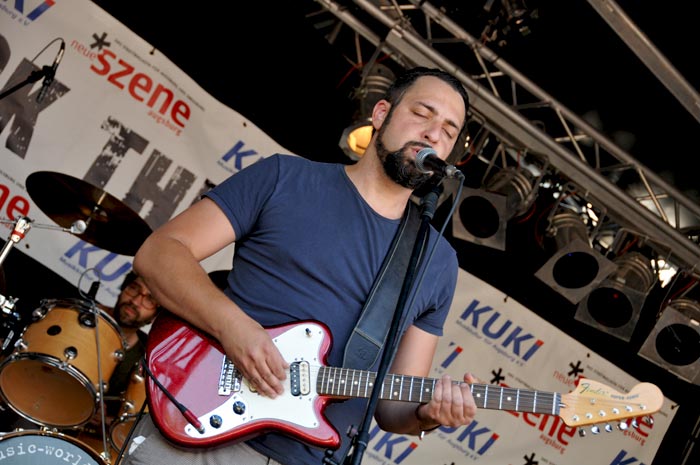 The next guest of the Kuki New-Stage was the band “Bassas da India”, which was sometimes pretty, sometimes aggressive. It is quite difficult to explain; let me put it this way: Sometimes they are like a silent and smooth mirror that hurt nobody, and then suddenly they beat the shores with power and energy like the waves in the storm. 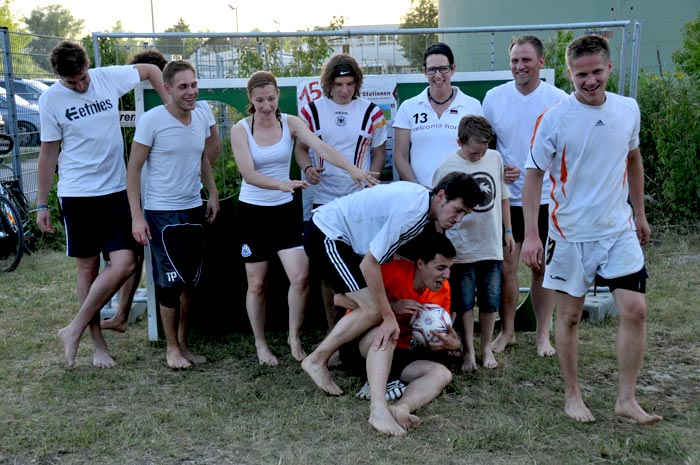 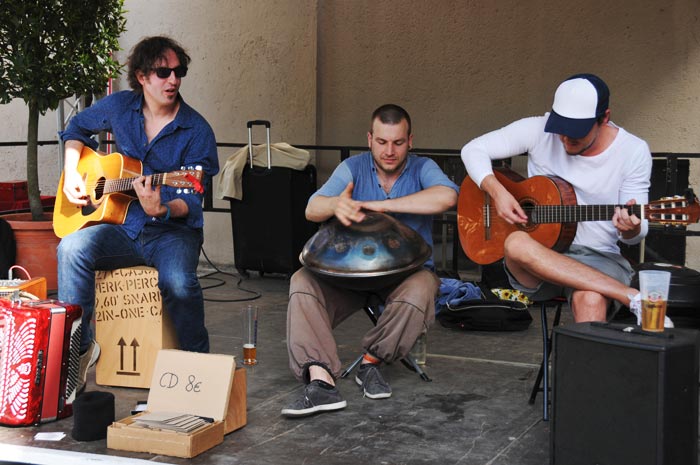 I guess there is nobody that does not acquaintance with Andreas Koller who plays Hang. At the corners of the festival that reserved for the street performers, with his incredible music he impressed even children and the audience spent romantic moments. Now, he was at the Acoustic Stage. This time, he was performing in the band “Sphärenschmiede” that he formed with his two musician friends from Augsburg. 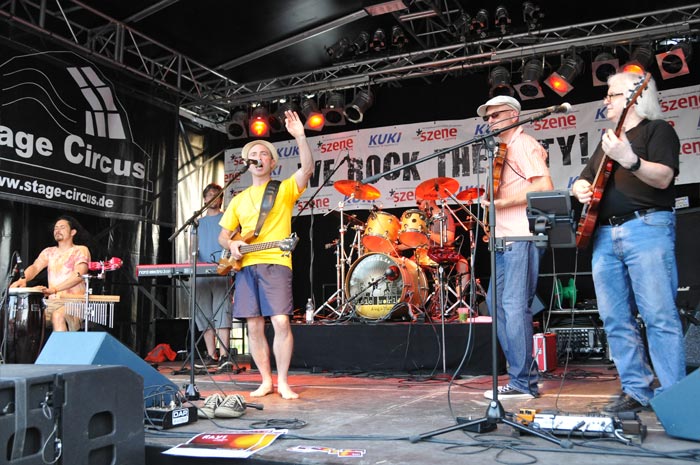 We came back to the Kuki New-Stage. They have always produced new songs, could not fit into the common concepts and it was time to form the band “Ray”. The roots of the band are based on folk music, but it is open for soul and funk, rhythm and blues, jazz and rock. Since we were not only open to entertainment and the band was making really good music, we danced and enjoyed with a wonderful musical performance. 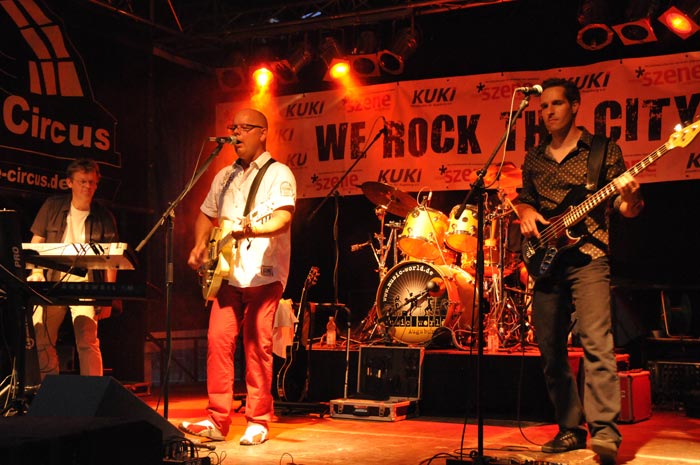 Backdoor Connection, who performed in various cities of Turkey, was on the stage for the closure concert of the Kuki New-Stage. The band, which also performed in the İzmir Street Festival, has a song called “Hello İzmir” that dedicated to the city of İzmir.