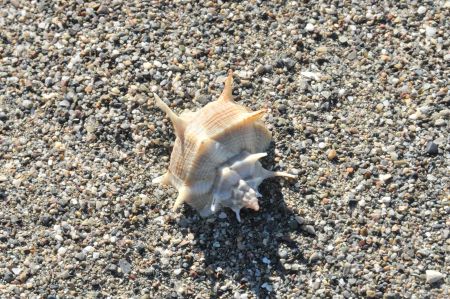 After some explorations in the city of Shkodra and the surrounding areas, we also wanted to have a check at the Adriatic beach in the coastal area, especially as the sun started laughing again in the cloudless sky.

First explorations at the bridges crossing the Buna and the Drin in the immediate vicinity of the Legjenda Camping had led to the "discovery" of a signposted cycle path along the rivers, which immediately starts after crossing the bridge over the Drin to the right, before the Rruga Katalines, in the direction to the coast. A little later, the Buna, next to the cycle track, also forms the border between Albania and Montenegro. The cycle track leads to the tourist town of Velipoja. Here there are some hotel complexes and restaurants, which however did not meet our interest too much. Here the link to google map.

After asking and describing our interests with the owners of the Legjenda Campsite, we were given the clue to the almost untouched beach section on the other side of Lake Keneta e Velunit. This beach section is about 23 kilometers from the campsite, but offers a quiet sandy beach and absolutely clean water, since no river or harbor and especially few visitors in the vicinity provide for rubbish. The Legjenda Campsite, by the way, several times a week offers a bus transfer to the beach, so the campers can stay at the campsite.

We headed for the beach and took the SH 27 highway towards the coast, then left to Rruga Baks Rjoll along the lake shore of Keneta e Velunit. A little later the beach is reached. Now, in November, the beach section is almost deserted, we only find one family to hold a picnic at the beach, where an adult prepares for a dive, probably to provide the family with fish, since he carries a harpoon with him. A little later he has already disappeared in the sea.

At a distance we see a nicely prepared beach cafe, next to a dugout, which is now filled with the typical umbrellas from the reed grass. Some amazing shells also testify that there are few visitors on the beach. Maybe something for you? Here are some impressions.

Starting from Legjenda Campsite - a boat trip on Lake Shkutari