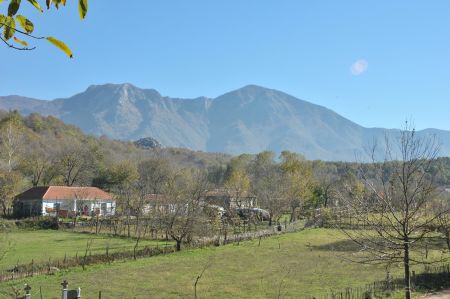 After our tour to the Ottoman bridge Ura e Mesit, we had continued along the river for a few kilometers and had quickly reached a valley between the foothills of the Albanian Alps, which in recent years have increasingly established themselves as an attraction for mountain hikers.

Last but not least, the International Cooperation Association (GIZ), with its investments in some villages, contributed significantly to the promotion of soft tourism through loans to residents. These loans were given to renovate houses to set up accommodation for strangers. At the same time, a cross-border long-distance route was marked. The 192 kilometer trail "Peaks of the Balkans" leads through Albania, Kosovo and Montenegro. It brought media attention and thus also the first visitors. Meanwhile, a second long-distance trail crosses the Albanian Alps, the trail named "Via Dinarica" from Slovenia to Macedonia.

For many vacationers such multi-day trips from cabin to cabin or along the guest rooms, of course, are too extreme. They rather prefer the short circular tour, which can also be organized very well from Shkodra. So we were on the way to explore a popular route, first by car on the E 762 to Koplik, then turn right to the SH 21 until junction to Rec, where there are two lovely restaurants, which are also frequented by Albanians. From here, a circular route, which is excellent, leads along a section of the valley along a typical Albanian peasant village before it ends again at the excursions beginning. In addition to the small, crouching houses, we especially noticed the field enclosures, which were here made of natural wickerwork. Natural material being used and quite effective.

At the beginning of November, the colors of the deciduous forests had already given way, but the fallen foliage was not only covering a rustling ground, but also a few more surprises. So we were not surprised that many locals also used the walk to collect chestnuts, which lay in large quantities on the ground.

In the restaurant we could even get a circular route printed on A4 paper, the otherwise well-marked route. We add a photo of the itinerary, which was relatively easy to commit and lasted about 3 hours, with no major elevation differences to be coped with. Afterwards there was the typical Albanian coffee in the restaurant at the starting point and, of course, some talks about further destinations. Stay tuned for more reports. Have fun with your plans for hiking.

Starting from Legjenda - A boat trip on Lake Skutari