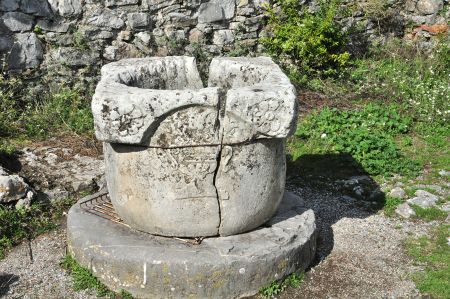 In our article about the Rozafa fortress, we had already mentioned the first settlement of the Illyrian tribes, which settled here in Shkodra in ancient times. The earliest traces of human settlement date back to the 2nd millennium BC, they were found south of today's town at Tepe and can be classified dating back to Bronze Age.

In the 4th century BC, the settlement was mentioned as Scodra. It was the seat of the Illyrian tribe of the Aryans who ruled over an area between the present states of Albania, Montenegro, Bosnia-Herzegovina and Croatia. Numerous artifacts and inscriptions in the Rozafa fortress still testify until today. Further artifacts and testimonies are also found in the archaeological museum of Tirana. After the Aryans the Illyrian tribe of the Labeats took the place and were far more powerful than their predecessors. Queen Teuta, King Agron, and King Genthios were among the most famous personalities of the Labeats, who also worked on coinage, and correspondingly, many of the rulers had added their names in Greek language or even their portraits on silver coins.

With the expansion policy of the Romans the Labeatic kingdom became a thorn in the eyes of the Romans; in 229 BC they began with the dispatch of a Roman army to Illyria for the first time. The First Illyrian War began and right outside of Scodra, the Illyrian armies of Queen Teuta had been defeated by the Romans. As a result, the labeatic kingdom and the dynasty could only keep the rule over the territory of the city of Shkodra. In 168 BC, the city itself was also occupied by the Romans and king Genthios was interned in Iguvium, a town in Italy, which was still independent from the Roman Empire.

Iguvium at that time was an important center of the Umbrians, situated at an important road from the Tyrrhenian Sea to the Adriatic crossing the Pass of Scheggia. From 268 BC, Iguvium belonged to the Roman sphere of influence as a civitas foederata ( "allied city") and served the Romans, about 100 years later, as a place of exile for the named King Genthios. It happened after the War of the Covenants that the inhabitants became Roman citizens; the city of Iguvium belonged to the Tribus Clustumina as a municipium. Iguvium, at the beginning of the Civil War in 49 BC, was taken by the troops Gaius Iulius Caesars.

During the Roman imperial period, Iguvium lost its importance because Via Flaminia passed the city only a few miles away. Archaeological remains have preserved a theater from the 1st century AD, as well as remains of houses, kilns and tombs. In Monteleto, on the outskirts of the ancient territory of the city, there was a large temple.

From the 1st century Scodra was part of the Roman province of Dalmatia. In the course of the administrative reform of the Emperor Diocletian it became capital of the newly created province Praevalitana at the end of the 3rd century. With the spread of Christianity, the Archbishopric of Scodra was founded in the fourth century, and by the Emperor Justinian it became the newly created Archdiocese of Iustiniana Prima in 535 AD - Scodra was thus reduced to the bishopric.
In the second half of the 6th century, the ancient city of Scodra was conquered by invading Slavs.

Shkodra - castle hill and modernity in the city centre