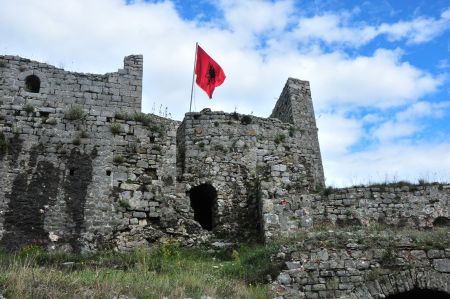 Our routes through Albania had led us through Shkodra several times, so we had, of course, also noticed the mighty fortress Kalaja e Rozafës (more rarely also Kështjella e Rozafës), to the left at the main road towards Tirana, which we wanted to visit extensively during our present stay.

Of particular interest to us was the legend still told by the locals, on whose origin the short name Rozafa can be traced.

According to the mythology about Rozafa, three brothers built the first castle at Shkodra. Their efforts were in vain, however, as the fortress walls collapsed every night. An old man advised the brothers to bring a sacrifice, as it was often the customary practice at those times: a woman was to be walled up alive. Only then the walls would last forever. The three brothers agreed to sacrifice that one of their wives, who would be the first to bring lunch to the brothers the following day.

The two older brothers introduced their wives to the plan, contrary to the agreement with the youngest brother. So it was the young Rozafa, wife of youngest of the brothers, who appeared next day on the construction site and was to become the victim. Rozafa took her fate, but insistently asked that one of her breasts, an arm and a leg should not be walled in. So she could continue to give her young child her breast, smoothly touch it, and shake the cradle with her leg. This is, based on mythology, what happened once. The white lime deposits on the ceiling in the entrance gate, which are constantly moist and dripping, were compared with mother's milk, are still serving as proof of this legend. These deposits probably form the origin of the Rozafa saga, appearing from the sintered tubes of the ceiling.

The fortress of Rozafa is now one of the most important sights of Shkodra and can be visited for a small fee. The walk up to the castle takes only a few minutes from the Legjenda campsite, first along the main road and then up the fortress road. With the exception of the still solid fortified walls dating mainly from the Venetian period, most of the buildings inside the castle, including the surrounding church St. Stephan, are destroyed or decayed. The access to the castle leads through several gates and the massive outer wall. The enclosed area comprises three courtyards separated by security walls. In several places the outer wall can be climbed, from which one can enjoy the view over the city of Shkodra and the Lake Skutari.

The fortress of Rozafa was built on a 130 meter high hill, which, at a strategic point, controls the flow of the Lake Skutari  into the Buna. To the south you will overview the heights of the Drin and Kir rivers, the fortress is almost completely surrounded by water. The flanks of the hill are very steep and rocky up to the walls. The extensive terrain of the castle in the form of an irregular triangle encompasses the rather flat hilltop. The access is from the east, where the hill continues at a lower altitude.

Already in the 4th century BC Illyrians founded a village on the hill a city with the name Scodra, which belongs to the predecessor of today's Shkodra. During the Roman period it extended to the plain at the foot of the hill. Later, Byzantine, local princes and Venetians used the facility, who built the defensive castle systems that much strong.

In 1479, the Turks were able to occupy the castle after a ten-month siege. Until the second half of the 17th century the castle was inhabited. It was in 1863 that the administration of the Vilâyets Shkodra was transferred from the castle to the city center. Until the year 1913, when Montenegrins conquered the city, the castle was used by the Ottoman army. Within the grounds there is a small museum and a folkloristic restaurant, which was now in October closed due to less visitors.

Shkodra Castle hill and modernity in the city center