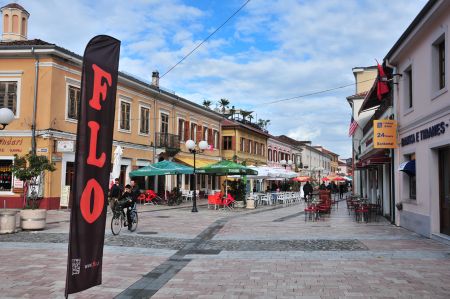 On a hill, steeply above the Buna and Drin rivers, from the Legjenda campsite to be seen well and just 10 minutes on foot reachable, you will reach the ruined castle Rozafa.

Its origin dates back to the pre-Roman times of the Illyrians, a tribe that settled on the Balkans. The castle has determined the fortunes of the city up to the modern times. Its position allowed to control important traffic routes on the river and on the land as well as later on the bridges and thus offered security for regents and the people over millennial. With the exception of the fortification wall, most of the buildings in the castle are now destroyed. Until the defeat of the Turkish troops in 1913, it had been used for military purposes.

At the northern foot of the castle hill, the Bazaar district of Shkodra once laid on the narrow bank of the river for centuries. Here you will find the Buna Bridge and the landing stage for the Buna ships as well as ships crossing the lake. If you arrive via Montenegro, you will cross this bridge before you reach the campsite. In 1990, Shkodra was a center of insurrection against the Communist dictatorship of Envar Hoxha. Four people were killed in demonstrations. The Catholic priest Simon Jubani celebrated the first service in the so-called old catholic cemetery of the city after over 30 years of religious prohibition and thus implied the end of this time. Today, Demokracia Square, with its fountain, forms the center of the modern city, where the pedestrian zone adjoins.

As early as around 1770, a shift of the city center away from the bazaar took about two kilometers to the east into the plain on the lake shore, so that the city soon had two completely separate parts. A third quarter lay south-east of the castle hill on the bank of the Kir river. After the earthquakes of 1815 and 1837, however, the course of the Drin, which had previously not led into the Buna but directly into the sea, changed, and the tobacco quarter was regularly flooded. The Leadmosque, the most important building in the today very rural district, was already unused after the First World War. The importance of the bazaar quarter also declined after the Second World War, so that there was nothing left of the historical substance in the 1980s.

Today's cityscape is still characterized by desolate blocks of communism, wide streets, but also winding streets with high courtyard walls and beautifully restored houses in the area of the pedestrian zone. In the center are recently some new high-rise buildings and churches. A central road with historical, urban houses has been restored and transformed into a pedestrian zone. A new shopping mall was built at the site of the old Bazaar district. Since the end of the 1990s, the no-man's-land between the castle and the present city has gradually been rebuilt with new services and trading houses.

The North-Albanian center has lost much of its old splendor. During socialism, Shkodra was still an important industrial city. Since the collapse of the socialist regime, the city suffers from a relatively poor economic situation, but it is increasingly improving. The cityscape has changed considerably in recent years due to strong influx from the surrounding villages. However, it was constructed without criteria and without a long-term plan. Many old houses in the Old Town had to give way to the new buildings. Only for a few years, there has been a construction zone plan, which is more or less adhered to.

Shkodra is the center of the Catholics of Albania, which primarily live in the north. The city is the seat of an archdiocese and hosts a theological seminary of the Order of Jesuits. The St. Stephen's Cathedral had been transformed into a gymnasium during Communist rule. There are traditionally some churches for Orthodox and Muslims such as the Orthodox Cathedral, the Ebu-Bekr Mosque and the Parruca Mosque, which were rebuilt.

The Migjeni Theater is one of the most famous ones in Albania and was named after Migjeni, an important Albanian poet and prose. In 1957 the University of Shkodra was opened as a pedagogical college. Today, it has six faculties.