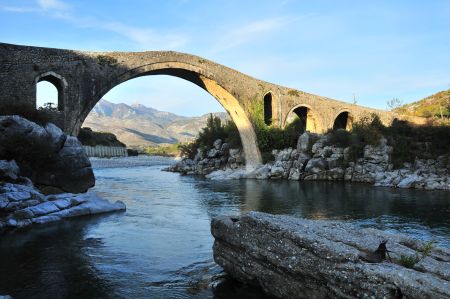 It was early afternoon when we talked with the operators of the Legjenda campsite about the Ottoman bridge Ura e Mesit, which ended spontaneously in the approach to the bridge.

Only about 8 kilometers from the campsite you will find this imposing bridge building, probably dating back to the 18th century. The Bridge of Mes, as the translation from the Albanian "Ura e Mesit" would be, crosses the river Kir, which here arrives from the mountains to the coastal plain around Shkodra. Its length is the most important and as well it is best preserved bridge of Ottoman architecture in Albania.

The Ura e Mesit is together with the banks about 108 meters long and consists of 15 arches. Its width is about 3.4 meters. The middle arch is up to 18 meters high. Its width is stated differently by twelve and twenty-one meters, or 21.5 meters, the latter value more likely to correspond to the proportions of the bridge and the height of the arch. About five meters to the north of the main arch, the bridge is slightly bent. Three arches to the left and right of the main arch are not typical curves, but rather to be described as pointed windows in the masonry. Typical architecture in the Ottoman architecture, which was already noticeable at the Seljuk bridge at Aspendos.

This bridge, too, was part of a trade route that led from Shkodra along the southern edge of the Albanian Alps to Kosovo, a path already used by the Romans, which was still practiced with donkeys until 1944. The bridge also connected Shkodra with the mediaeval town of Drivastum (Albanian Drisht), on the other side of the river.

Because of its similarity with other buildings, it is assumed that the bridge was built at the end of the 18th century by the Shkodranian Pasha Mehmed Bushati, who then had repaired several roads in the area. At that time the cities of northern Albania and West Kosovo were doing well, which allowed the construction of such a "monumental bridge". It could also be that Bushati only had renewed an older bridge from the 17th century or even a Venetian building from the 15th century, or that an older, steeper bridge on both sides type of ramps were extended.

Its name the bridge has got from the small village Mes on the south bank of the Kir. A concrete bridge about 50 meters south and an industrial route slightly further up the valley greatly affect the view of the cultural monument, but ok. In the once communist Albania, Ura e Mesit was a popular tourist destination, which is why, at its eastern end, a cafe was built which has now decayed. In 2010 the access to the bridge, especially on the western site, was renewed - which, like many Albanian river banks, was more like a garbage dump, has since been a well-maintained complex with information boards. In the village on the west bank, there are now also several private cafes, which offers subsequent coffee breaks at the end of a bike tour from the campsite as a day destination.

However, we continued our short trip a bit further and drove along the river Kir deeper into the Albanian Alps, always following the course of the river. Further up we were pointed at a bathing place, which is used by many local people, when it gets too hot in summer in Shkodra. Also a day trip for touring cyclists, especially as the road is asphalted really proper.