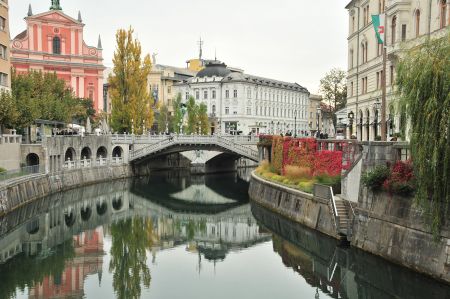 After arriving at the Camper Stop Princeplatz in Visjna Gora, we had a little bit in the place itself, also to explore the extremely attractive solution to reach the center of Ljubljana by train.

During the day, almost continuously half-hour there is the possibility to get to the city by train from Visjna Gora, the camper can safely stay on the site at the tennis court. Already for the next morning we wanted to use this possibility for the first time.

Ljubljana is now the political, economic and cultural center of Slovenia. In 2016, Ljubljana was even awarded the title of "Reformation Town of Europe" by the Community of Protestant Churches in Europe. In the German-speaking world the name Ljubljana is still being used with the historic German name Laibach, which is still common in Austria. For the origin of the Slovenian name of the city, there are two basic explanations: the first one comes from ljubljena ("beloved city"), the other by the Latin river name aluviana.

Already from the early history of human settlements there are finds, so remains of the earliest sea containers (pile dwellings) from about 3600 to 3100 BC could be found in the Ljubljana moor. Between 1000 and 700 BC first Illyrian and Venetian settlements existed and around 400 BC the period of the Celts followed. In the 1st century BC a military fortress was erected by the Romans on the site of today's Ljubljana. In 14 AD the Roman settlement Emona (Colonia Emona Iulia tribu Claudia) was created. It was situated on the site of today's Ljubljana, but it was lost in the international migration and is therefore only a predecessor settlement of today's city.

Around 600, the Slavs came into the area, followed by a decline of Emona. Around 800 the area of Ljubljana fell under the rule of the Franks. The period between 1112 and 1125 is the period of the first written records of Ljubljana. The first documentary mentioning of the town dates from 1144. The settlement, founded by the Spaniards, was called city for the first time in 1220. In 1243, its market rights and its city wall were documented. In 1280 the inhabitants were called "cives".

In 1335, Ljubljana became the capital of the duchy of Carniola, which belonged to the Holy Roman Empire, among the Habsburgs. In 1415, Ljubljana resisted a Turkish invasion.
In 1511 Laibach experienced its first great earthquake. In 1536, Protestants established a professional Latin school in the gymnasium. In 1597, the Jesuits arrived in Ljubljana, which two years later established their own gymnasium. In 1693 the founding of the Academia Operosum followed, an association of the most distinguished scholars, and in 1701 the founding of the Academia Philharmonicorum followed this sample.

In 1849, the railroad connection Laibach-Vienna, the Austrian southern railway, was built and in 1857 as an extension, the connection Ljubljana-Trieste was opened. In 1861 the public gas lighting was introduced and in 1890 the construction of the public water supply followed. After a devastating earthquake, Laibach pledged itself to a modern appearance in 1895. In 1898 the public electric lighting was introduced. Three years later, 1901, the introduction of the electric tram in Ljubljana followed.

The coat of arms of Ljubljana shows a green, winged dragon on a tower above a city wall, we meet the symbol of the city several times on our tour. The city is famous for its architectural monuments, planned by Jože Plečnik, as well as for its well-preserved inner city, including:

the old town, which is a protected monument
• the Autonomous Youth Center Metelkova
• Jože Plečnik buildings, such as the Three Bridges (Tromostovje), NUK - the Slovenian National Library, Tivolipark
• the castle
• the Cathedral of St. Nicholas according to the plans of the Roman Jesuit Andrea Pozzo
• The Archbishop's Palace
• the Franciscan Church of the Annunciation at Prešernov trg To France Prešeren)
• the town hall
• The Serbian Orthodox Church of St. Cyril & Methodius
• Slovenian National Gallery
• the Moderna Galerija Art Museum

On the southern edge of the Rožnik Forest Hill is the Zoo, about 30 minutes walk from the town center. Ljubljana, on the other hand, resembles an Austrian city, but has a special Mediterranean young flair, thanks to its old town, the architecture of Plečnik's cultural circles, the many cafes along the river and the temperate climate. In the summer, especially in August, various music events take place in the old town and on the castle, including the Music Academy in Ljubljana.

Tourism in the city has been experiencing a strong upturn for years, and room prices have also risen accordingly. Probably the one who is coming with an own camper has an advantage.

Passing the Karawanken Tunnel to Slovenia