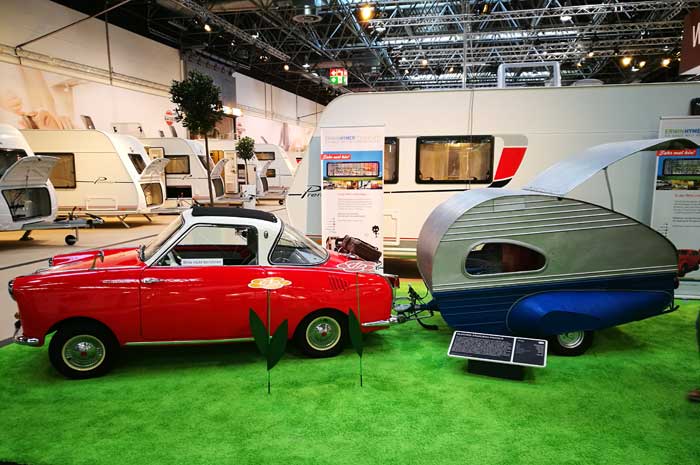 The first "tourist touring cars" were manufactured in Great Britain since the end of the 19th century. They were sometimes furnished very luxurious, biaxial and initially drawn by horses. At the beginning of the Second World War, there were several thousand caravans on the British Isles already. 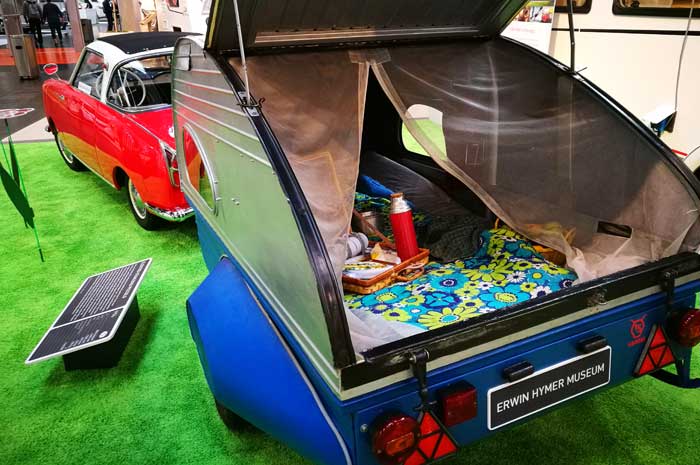 The German counterpart to the English "touring car" was invented by Arist Dethleffs (1908-1996) in 1931. Dethleffs called his vehicle "Wohnauto" and fulfilled the wish of his fiancée, the painter Fridel Edelmann imagined, who, as she had written in a letter to her future husband, "something similar to a gypsy car in which we drive together and I still could paint". 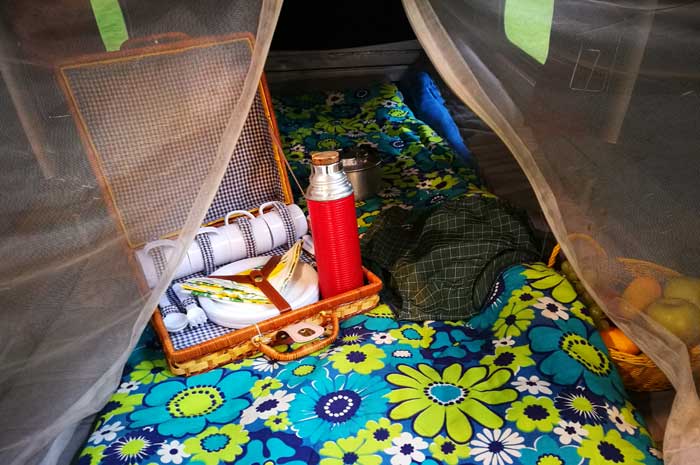 "Wohnauto" was a misleading term, because it was a real (residential) trailer. It was completed at Easter the following year. In the pictures above a piccolo of the electrical steel construction from the year 1956, today to be seen in the Erwin Hymer museum (if not as exhibit object on a fair). 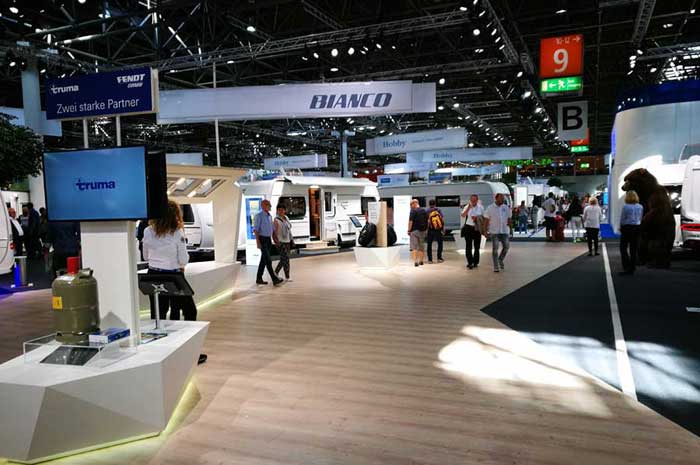 The classic caravans are often devided in
• mini-caravan,
• touring caravans - the most common variant - and
• Large or luxury caravans that can only be towed by sufficiently large and powerful motorized towing vehicles
Today the mini-caravans are experiencing a renaissance. 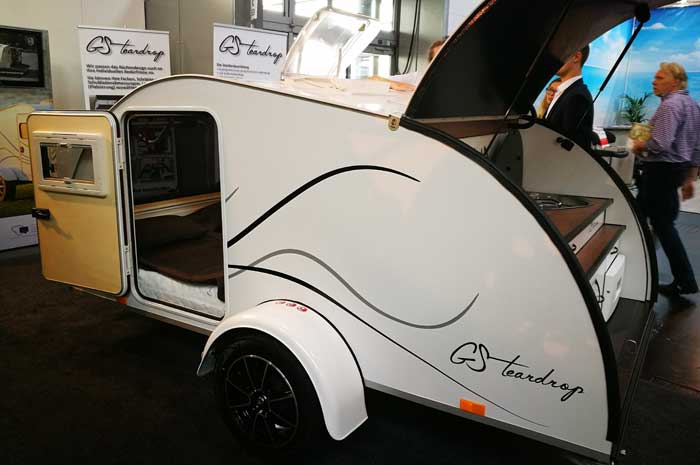 The structure often consists of a frame construction which is externally covered with aluminum sheet and internally with a plastic or wooden cladding, while in between isolated with plastic foam (often polystyrene or polyurethane). Ordinary wall thickness is 30 to 40 mm, in high-quality models up to 50 mm. 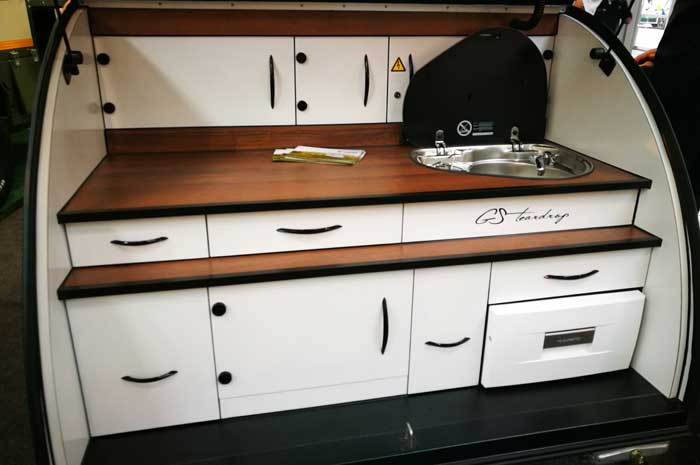 Increasingly, vehicles made of glass fiber reinforced plastic (GRP) are being manufactured; the use of fiberglass is better for durability. In particular, weather conditions such as hail are better compensated by a fiberglass roof, increasingly also fiberglass walls are used. The bottom plate is increasingly made of GRP materials. 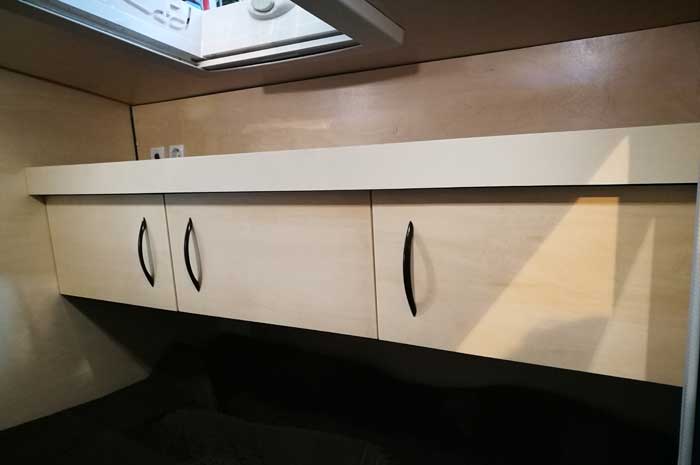 Large (luxury) caravans can be up to 8 meters long and 2.50 meters wide. Typical travelling caravans have a body length up to 4.50 m and a width of 2.10-2.30 m and offer depending up to six beds in the interior. 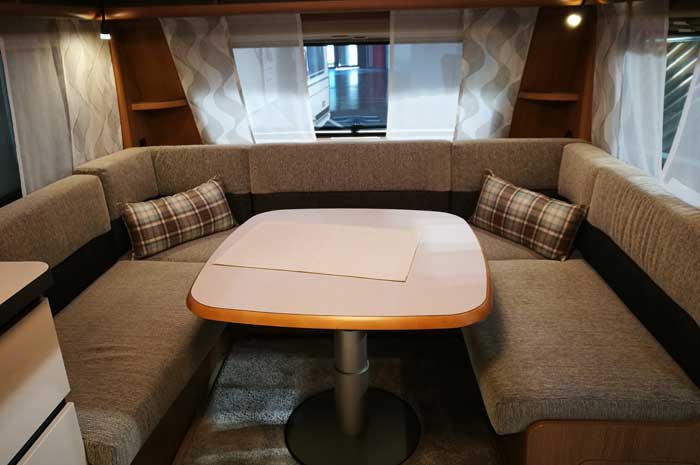 Two of the places are mostly suitable for children only, often in the form of bunk beds. Beds can be converted into groups of seats during the day; to the huge seat group (one sits opposite) or U-seat group or rear seat group (one sits on three sides around the table). Travelling caravans are sometimes used as a weekend accommodation in so-called permanent camping. 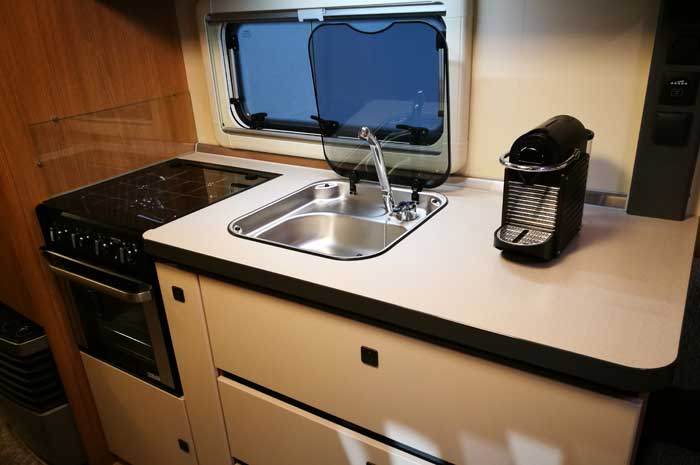 More and more frequently on the market are family caravans with up to seven beds. Usually there is a fixed double bed, two to three fixed bunk beds for the children, as well as a sitting area, which can be converted again to the double bed. 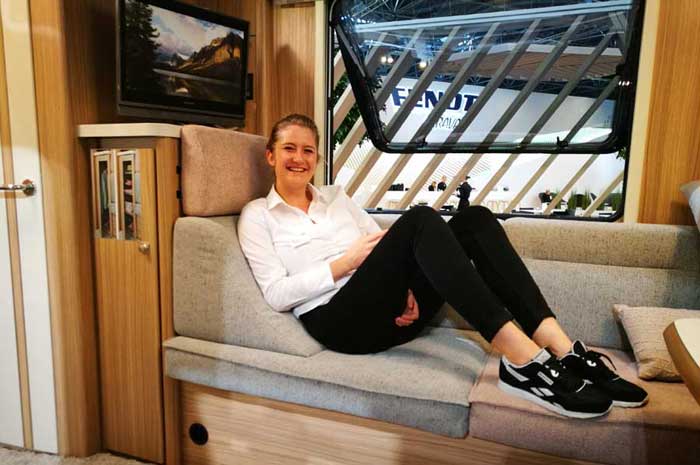 Multi-tasking caravan at the Fendt-Caravan both - garage in the bow
Farma Sotira - practical kitchenbox 1.0 in use in Albania