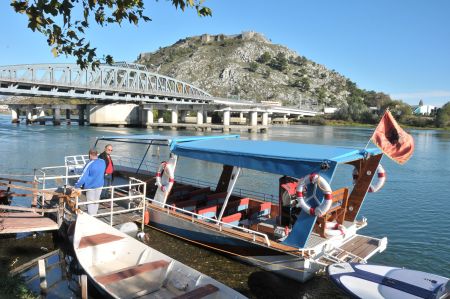 After a few days of mostly cloudy skies with light rain showers, the sun is back, so we prepare ourselves for further excursions around Lake Skutari and, after a brief consultation with the hosts of the Campsite Legjenda, also on the lake, the largest of the Balkan Peninsula.

The Lake Skutari is separated from the Adriatic coast to the south-west by the up to 1,600 meters high mountains Rumija, which are only 20 kilometers away, while on the north-east side a wide stretched, partially dull flatland follows.

The present city of Shkodra, where the Legjenda campsite is located, is surrounded and bounded in the west by the swamps of the Lake Skutari, to the south-west by the rivers Kir, Drin to the south and Buna in the west, along its fairly wide river bed. In the north, the plain between the lake and the mountains open. The wealth of water in the region between Shkodra and Lezha has always been a blessing and a plague for people. The fertile soil gave high yields to agriculture and cattle, but the unpredictability of the rivers coming from the northern highlands, above all the Drin, still regularly lead to floods, which in turn can destroy the income from agriculture.

Given this information, it was soon clear that the lake basin, together with the river, is a sensitive ecosystem that, according to local ecologists, offers a home to more than 20 endemic animal and plant species. What a paradise could the lake and the river be so also for nature lovers and bird observers, to whom this exploration goal is certainly not yet widely known. It is important to know how much of the water- and migratory birds we were able to experience during our boat trip, unbelievable, as a resting and breeding ground for migratory birds from Northern Europe. They winter at the lake or use it in the spring on their way as a resting place.

It is therefore no wonder that the Montenegrian part of Lake Skutari is declared as a national park in 1983 and was included in the international Ramsar list of protected wetlands in 1996. In 2005, the Albanian part was also protected as a natural reserve. The flat islands near the river could be used as observatories by ornithologists or leisure observers. As an example of endemic species, only the Skutari water frog, which occurs in the whole region, is named after the lake. The water frogs are classified as essential for the food chain in the lake.

Only a few meters from the campsite you will reach the landing stage of an excursion boat, to which we leave a little later. Interesting are also the fish reefs, which completely pass through the outflow of the Lake Skutari and provide for much yield, so delicious fish dishes in many restaurants are written in the front of the food list. At the same time, private fishermen can be seen everywhere on the shore and on the bridges, which provide for supplies for private households.

Having arrived on the boat, it passes underneath the bridges, and after passing several anglers arrived at the lake. Here, too, the water-birds are present in large numbers. On the way we made aware of the different excursion locations on the shore, certainly worthwhile day trips, which are easy to reach from the campsite on foot or by bike, especially since the city administration has built a pedestrian and cycle path that leads up into the neighboring village along the lake side. A few buildings at the outskirts of Shkodra, used by people of Sinti and Roma, who settled in unused houses after the bridge, destroy the positive effect of the routes along the lake because of the garbage there. Perhaps the city administration should be active for some changes. As in many countries, the problem of waste has not yet become a top topic in Albania, nor has the necessary environmental awareness grown so far.